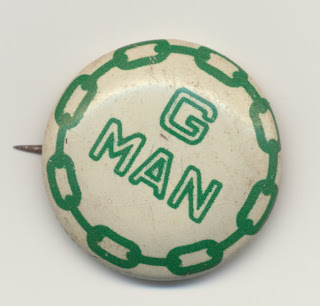 Article by Ken Kristjanson, picture of  his G Man badge provided by him.
Shortly after arriving at the Booth Fisheries Station on Georges Island in July of 1950, I immediately started to explore the camp. We had eight whitefish boats, each boat crewed by four men.  Across the harbor, Sigurdson Fisheries had ten and Armstong Gimli Fisheries had eight.
My father informed me that as a Junior Shore Hand, I had duties and he proceeded to hand me a list. This included repairing wood fish boxes  – of which we had hundreds. The boxes were used to ship the Station’s catch twice a week via the M.S. Red Diamond to Selkirk for further processing. Each box held 50 pounds of fish. The box and the accompanying ice added another 25 pounds so the box had to be in good repair.
Other duties included making sure the cook shack had a sufficient amount of wood to burn. The cook shack had a monster of a wood stove that had come out of a fine Winnipeg Hotel. The beast was like a drunken sailor on a Saturday night spree –  it gobbled cord wood length pieces of birch and pine as fast as we could shovel it in. It was all the Cookie and myself could do just to keep up. The Cook had to be able to feed 50 hungry fishermen a hot evening meal all at once and so a roaring fire was what the Cook ordered. Once the meal was over the ashes were banked and the Night Watchman looked after the fire for the 4 A.M. Morning breakfast.
When the M.S. Red Diamond arrived for her twice weekly pickup of our stored catch, we had to off load the cargo she brought for us before we could fill her hold with the pre-iced boxes of fish. We unloaded mail, gasoline, groceries, miscellaneous  items and more boxes. Also dis-embarking on this trip, were two men, both rather shabbily dressed and unshaven. They had their personal gear plus some other strange supplies with them. My father greeted them warmly but no one else seemed to pay them any attention.  He helped them load their supplies on to a trailer which was pulled by a crawler tractor. The tractor’s main job was to haul the offal (fish guts) to the North side of the island in the evening after the fishermen had finished processing the day’s catch. Except now it was taking these two men and their gear there instead.
After the strangers were settled they were invited in for the evening meal. They ate heartily. Ravenously as I recall. All evening, my enquiries about these newcomers were greeted with shrugs by the fishermen. So I took it upon myself to investigate. After all the Cold War was raging. The Korean War was about to begin. The world once again was headed for turmoil. Were these spies setting up a clandestine radar base to monitor Lake traffic? How or why was my father involved?  Why all the secrecy? Was he, perish the thought, in the employ of a foreign government? All these thoughts raced through my fourteen year old mind. So I made my way secretly  to the stranger’s camp to check things out. Just as I got there, the tractor came by hauling six gut barrels of fish guts. From my hiding place the strangers inspected the barrels and chose two .The tractor and remaining cargo proceeded to the dumping area. I was even more confused than before and sought out my father to confront him about being a spy or harboring spies or whatever was actually happening.
As it turned out the strangers were two old friends of the family who had fallen on hard times. In the days before wide spread old age security, they were simply trying to make a living rendering fish oil. As was the custom on the Lake, everyone helped where they could. Our family agreed to supply them with the raw product and to board them free of charge. They went about their smelly work and inside of a week they had rendered sufficient fish oil to catch the next boat south. I never ever saw them again.
And so I turned in my Junior G Man badge and returned to being a Junior Shore Hand.

(Ken Kristjanson is a former vice president at the Bank of Montreal but for the purposes of this blog, what is important, is that he is from the Kristjanson fishing family of Gimli. His father, Ted, created a local museum of fishing memorabilia and equipment and was one of the most knowledgeable individuals regarding fishing on Lake Winnipeg. Ken’s brother, Robert, is still a fisherman. I, and a number of other people, have been urging Ken to write up his memories of  his family history and his early years on Lake Winnipeg. Here is one of his stories. This story was first published in Lögberg-Heimskringla, Canada’s oldest continually published ethnic newspaper. Although its subject matter is concerned with the Icelandic North American community, it is published in English and can be purchased on-line.)