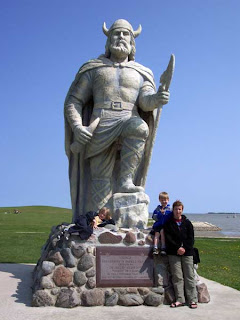 I love the Gimli Viking. He’s been a part of my life since 1967. He was created by Gisur Eliasson, a friend, artist and professor. Being created by Gisur, how could he be anything but friendly?
I love him because he has horns on his helmet. That means that he is our New Iceland Viking. He is not a real Viking. Real Vikings, unfortunately, did nasty things. Viking means pirate. The whole purpose in life for a pirate was to steal as much as he could. Pirates were not brave warriors. They were plunderers. They chose soft targets. You know, monasteries full of monks who were busy praying, singing, copying and creating manuscripts. These weren’t warrior monks practicing Kung Fu. They were the educated segment of society that preserved and created knowledge. Today, it would be like a motorcycle gang descending on a university campus, burning the buildings, killing the professors, and kidnapping the students to sell into slavery.
I know that the Vikings, the Swedes, Danes, Norwegians, and some Icelanders, who went Viking, that is on pirate raids, eventually settled down. We all get older. Viking longboats were great technology for the times but they weren’t first class travel for aging bones. When they settled, the Vikings created societies and, with those societies, they developed cultures. Many aspects of that culture is admirable.
However, most people who rah, rah Vikings, don’t know anything about Viking culture. Unless, of course, it is from movies or comic books. After a few beers, it’s yah, we’re Vikings, we fight, we kill, we plunder. We take those Irish women as slaves. They get excited at the idea of Irish women as slaves. My response is “Get a girlfriend.” A little sex and you’ll not get so excited over an Irish slave fantasy.
I like the Gimli Viking because those horns on his helmet say he’s not a real Viking. He’s our Viking. He’s the Viking of our imagination. He’s an image of something we admire. Our people who came to Canada were so poor they had to have government help to relocate within Canada. They were laborers, domestics, paupers, farmers coming from the poorest country in Europe.
The Gimli statue captures the idea of nobility, of strength, of bravery, of seeking new lands, of opportunity. Interestingly, it’s positioned to look westward, at the land, not at Lake Winnipeg. The statue is not looking to leave, to go raiding, but to settle. He’s coming to New Iceland to be a dairy farmer, a sheep farmer, a grain farmer, a railway worker, a logger, a ditch digger, a fisherman. The first settlers of Iceland and the settlers of New Iceland had that in common. They weren’t going raiding. They were coming to settle the land.
It was not Vikings who settled Iceland. It was Norwegian farmers. They weren’t going Viking. They didn’t go to Iceland to plunder it. They went to settle it. They brought cows and sheep and horses. They brought families. They might have looked a bit like the Gimli statue, but they, too, looked landward, looked for places to settle, to raise dairy cows and sheep.
There’s nothing wrong with admiring Vikings. There is much about Viking culture to admire. However, to admire it, you’ve got to know it. To know it, you’ve got to make the effort to read about it. Drinking six beers and eating some dried cod don’t make anyone a Viking or an expert on Viking history.
The next time you are in Gimli, go visit the Viking statue. Rub his knee for luck. If you are of Icelandic descent, put your hand on him for a moment and be grateful that through the centuries of political and economic exploitation, your people held onto the spirit of independence the statue represents so it was still there when they had a chance to sail to North America.
The model for my great great grandparents wasn’t of Viking raiders or pirates. It was of farmers fleeing an oppressive king to settle in a new land with new opportunities. That’s how they were similar to people like the Viking in the Viking statue.