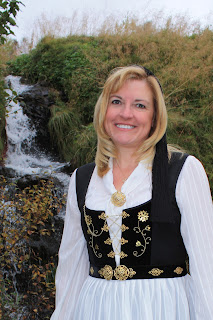 Sunna Pam Furstenau. Photo taken by her cousin, Hjálmar Stefán Brynjólfsson. The upphlutur is modern and was sewn by Oddný Kristjaánsdóttir.
One of the most noticeable things in photos taken during and shortly after immigrants arrived in Canada are their clothes. You see crowds on train platforms and you know right away from where these people have come. Icelandic clothes, German clothes, Ukrainian clothes, Mennonite clothes.
Today, the same is true in the West End of Winnipeg. You see people in clothes from the Middle East and from Africa. You know they’re definitely not Icelandic and that they’re probably recent arrivals.
The most obvious sign of integration and assimilation into Canadian society is the changing of ethnic clothes for whatever the local people wear. Part of that is because people want to fit in. However, the need to wear clothes appropriate to both work and the climate are paramount. 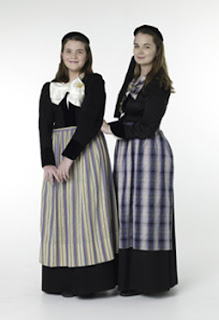 Icelanders wore clothes in Iceland that were suitable for unheated houses that were constantly damp. The people also were constantly damp. In Independent People, Bjartur of Summerhouses says that he has been wet all his life and it has never done him any harm. Visitors to Iceland in the 1800s frequently mention being soaked through and how difficult it was to get their clothes dried out before they had to put them on the next day.

C. W. Shephard in 1867 and his companions, trapped for days by a May storm, decide to go out to try to bag some wild fowl. He says, “returning at night, draggled and drenched, to cook our supper in the dark recesses of the kitchen, while we hung up our soaking garments in the vain hope that the smoke from the smouldering fire might dry them.”
There were no roaring log fires, no fireplaces, no chimneys, only holes in the floor where the precious fuel of dwarf willow, peat and dried sheep dung were burned to cook porridge or bake flat bread. Skyr didn’t require cooking. Neither did dried fish. It was pounded with a stone hammer until it could be chewed.
Visitors to Iceland in the 1800s and even before always comment on the clothing that Icelandic women wear. There are often long sections describing women’s clothes. These are frequently accompanied by sketches or paintings. There are fewer descriptions of men’s clothes.
John Coles, in 1882, describes Jón of Vidrkær this way: He wore a dark suit of homespun cloth of homely cut, trousers much patched about  the knees regardless of colour and material, a black felt wideawake, and a knitted comforter round the neck…Though in outward looks he may have passed for a gentleman in reduced circumstances rather out at elbows, he was prompt in action, civil, and obliging. A bargain was soon struck for the hire of his services as guide” 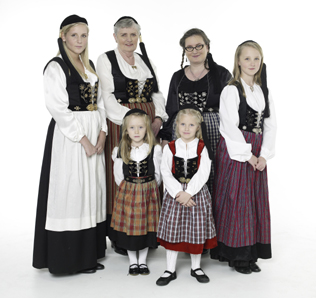 upphlutur
Photo from upphlutur.is
Jon’s wife, Johanna Katrin, is described as “a fair woman, about 30 years of age, with a pleasing expression of face and bright, healthy complexion. She wore the usual Icelandic cap with silken tassel falling down on one side of her head, and a thick woollen dress, such as is worn by any Scotch wife.”
S. E. Waller arrives in Reykjavik on a Sunday in 1874 and says this, “Just about this time the beauty and fashion of Reykjavik came pouring out of church, and we had ample opportunity for inspecting any peculiarities of dress and appearance. Many of the Iceland ladies wore bonnets and carried parasols of Danish or English manufacture, but the generality had nothing on their heads but the little black woolen cap with the silver ornament and long silk tassel used alike by rich and poor,  in-doors and out. The fashionable colour was black…The men were all dressed in dark clothes, and almost all had round felt hats.”
The appearance of the parasols and bonnets indicate that even in Iceland clothing is changing, being influenced by European fashion in Reykjavik. 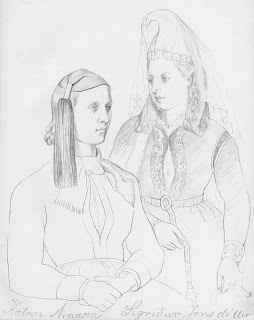 Sketch by Jemima Blackburn, from How The ‘Mastiffs’ Went to Iceland, 1878

However, when Trollope comes to Iceland in 1878, he writes with great enthusiasm about “Our other Iceland beauties, Sigridur and Gudrun, were there in the full picturesqueness of their native costume. It was all very unlike the dresses of our own girls, but most unlike no doubt in the head-dress. This consisted of a white hat, with, I think, yellow bands to it, made something in the shape of Minerva’s helmet, with the crest turned forwards. From this depended a light veil covering the shoulders, and hanging down the back, but leaving the face free. Then there was a jaunty jacket, partly open in the centre, with large bright buttons down the front and on the sleeves. The skirt beneath was of some bright colour, projecting forward like an extinguisher, coming even quite down to the ground so as to hide the feet, but with no inclination towards a train. In fact it seemed to be of exactly the same length before and behind. The head-dress, as may be seen in the excellent portrait furnished by our artist, for which Sigridur had that morning sat, is very pretty. The costume as a whole is picturesque and the jacket is becoming.”
As hard as life in Iceland could be, account after account describes the shock of the Icelandic immigrants in Canada when winter set in. Icelanders had never experienced anything like it. Their houses in Iceland were made of layers of rock and turf with walls two to six feet thick. Heat was provided by body heat. Twenty people might sleep in one room. Often, heat came from the sheep and cows that were stabled next to the living quarters. Clothes were made of wool. Wool holds body heat even when wet. However, body heat and wool couldn’t keep anyone warm in forty degrees below zero in a Canadian winter.
Survival required that the Icelanders adapt in every way possible, including their clothes, as quickly as possible. The picturesque quality of the women’s clothes didn’t keep them warm.
Also, many women stayed in the cities, particularly Winnipeg, and took work as domestics. There, they learned English ways of being clean, of dressing in an English way, of how they needed to dress to fit into city society. They had risked hardship and death for opportunity and were determined to make the best of their traveling to a new country.
Living conditions outside of the city were extremely difficult. For the first few years, just as in Iceland, the struggle was to get enough food to survive. But building homes that would hold out the cold and hold in the heat from stoves was also a challenge. Cutting down trees, grubbing out tree roots, tilling the earth, were completely new. There was no farming in Iceland beyond pounding sheep manure to dust and then spreading it on the home field. The frost heaves made scything difficult and everyone worked at the haying but this wasn’t harvesting as it was known in Canada.
Icelandic clothing had to give way to clothing suitable for daily life in a country where the summers were hot, the winters, cold. Icelandic clothes had to be regulated to the closet where they would remain except for special occasions.
Today, women still wear the traditional Icelandic dresses on special occasions such as weddings or formal occasions. They are most seen at Islindingadagurinn , the INL convention or August the Deuce. They are a way of reminding people of the time of immigration, of our heritage. They’re a way of saying, “Remember your mother or amma or lang amma or lang lang amma. Remember our Icelandic heritage.”
Today, we can encourage the wearing of historic Icelandic women’s clothes as a way of reminding ourselves of our identity. It helps arouse curiosity. It gives us a chance to answer questions, to impart a bit of history. It helps set us apart as our ethnic clothes are different from that of others.
Wearing clothes from the time of immigration pays respect to our ancestors. It says, I remember you. I haven’t forgotten. However, it would be good if at various functions there were displays naming and explaining the different costumes so that along with a sense of the exotic there is an element of education for both ourselves and strangers.
I’m quite sure that Sunna Pam Furstenau has a lot more impact on her audiences because she’s wearing her traditional Icelandic costume.