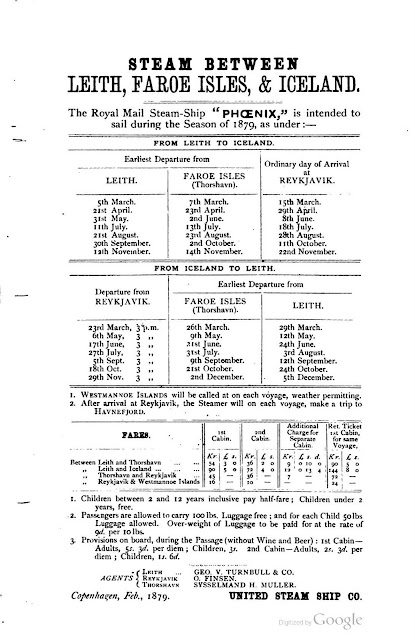 No destination is as important to North Americans of Icelandic descent as that of the farm on which their ancestors lived. In article after article, people write about the rush of emotion that occurred when they stood on that hallowed ground. They can, with no difficulty, see their grandparents or great-grandparents making hay, bringing in the sheep or cows. The sound of the waves on the shore is the same sound their ancestors heard. Many people refer to this land as “My grandparents’ farm.” But in fact the people who left for North America seldom owned land.

All Icelanders were not equal – socially or politically or financially. Nearly everyone had to be attached to a farm, and workers were allowed only one time during the year when they could move to another farm. There were six classes of people on these farms.

1. There were the Bændr, the land owners, at the top of the heap. The big shots. They were the farmers for whom everyone else worked. They had political muscle, and fought hard against the emigration of their workers who were providing cheap labour. Newspapers were filled with stories about the disputes between those who would emigrate and those who saw their power eroded.

2. There were the Húsmenn. These were people who had property on the Bændr ´s land but were not allowed to make hay or to use the pastures.

3. The Kaupamenn were labourers who were hired to work for the farmer.

4. There were Hjáleigumenn – the equivalent of crofters renting a small farm (hjáleiga) from the Bændr.

5. Then there were the Vinnumenn, the servants.

If your ancestors were not No. 1, and didn´t actually own a farm, they had good reason to leave Iceland. If they did own a farm and emigrated, there must be a story there? They had a legal and political system that made everything in their favour.

There was little actual cash. The peasants – yes, they were peasants – paid their rent and the money they owed in June and July with wool. In September and October, they paid with smoked and cured mutton, grease and tallow, and sheep skins and lamb skins with the wool still attached. Fat of any kind was always in short supply, and butter and cheese were usually kept for personal use or for bartering. Sometimes butter was used to pay taxes.

If your people worked on a farm, they were, essentially, indentured servants. Some farmers treated their people well. Others treated them badly. The landscape was beautiful, but nothing is beautiful when you are hungry. Emigration did not happen easily. People were driven to leave Iceland out of desperation. The trip was long. The way was hard. Many died.

But, in spite of all this, the beauty of Iceland stayed with many of the emigrants. You can read it in their poems, in their prose. You see it at Icelandic Celebration and August the Deuce, at Thorrablot and in the Icelandic clubs, in the Snorri program, and at the Icelandic summer camp. You see it in the frequent visits of Icelandic North Americans to Iceland.

You see it in those emotional visits to the places our ancestors left. The descendants of paupers, servants, crofters, labourers, tenants, still hold a place in their hearts for Iceland. When you visit this special destination, the farm of your great-grandmother or great-grandfather, or great-great-grandparent, take the time to reflect on what their life was like in the 1870s, and how desperate and brave they must have been when they walked away from both house and homefield for the last time to create a new life for children not yet born.

When you are setting the table for Thanksgiving dinner take out pictures of your ancestors who left Iceland for Canada, set them on the buffet or even on the dining table. Before you begin to eat, tell your family and guests something about them and, when you say grace, include these people from your past in your thanks. It is because of them that you sit down to a feast today. After the meal, when you’ve eaten your turkey, potatoes, gravy, your pumpkin pie, and are enjoying your coffee reflect upon the empty dishes, your full stomach, the photos and silently give thanks to Jon and Jonina, Gunnur and Gusta, or whatever their names were. Bless, bless.

(This article appeared in a slightly different form in Logberg-Heimskringla. This year is LH’s 125th birthday. Consider giving someone a gift of a subscription to celebrate.)