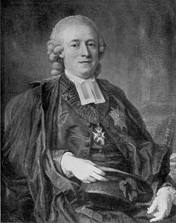 Uno von Troil
In 1772, Uno Von Troil, joined Joseph Banks in a journey to Iceland. Afterwards, he wrote a series of letters about the expedition. The language is now archaic and, for many people, difficult to read. Therefore, I have “translated” as best I can, some of his writing into modern day English. There will, of course, be errors, for I am no scholar, but hopefully they will be minor and will neither mislead the reader, nor interfere with the pleasure of reading about Iceland a hundred years before our ancestors began to leave for North America.
Because I must change the archaic spelling so much, I’ll use quotation marks only to indicate that the material is taken from von Troil.
“The Icelanders are of a good honest disposition, but they are, at the same time, so serious that I hardly remember to  have seen any one of them laugh; they are by no means so strong as might be supposed, and much less handsome. Their chief amusement, in their leisure hours, is to recount to one another the history of former times; so that to this day you do not meet with an Icelander who is not well acquainted with the history of his own country; they also play at cards.
“Their houses are thatched with turf and so small that you can hardly find room to turn in. They have no floors; and their windows, instead of glass, are composed of thin membranes of certain animals. They make no use of chimneys, as they never light a fire, except to dress their victuals, when they only lay the turf on the ground. You will not think it strange, when I inform you, that we saw no inns, except shops and warehouses; and on our journey to Hecla we were obliged to take up our lodgings in the churches.
“Their food principally consists of dried fish, sour butter, which they consider as a great dainty, milk mixed with water and whey, and a little meat. They receive so little bread from the Danish company, that there is scarcely any peasant who eats it above three or four months in the year. They likewise boil groats, of a kind of moss (Lichen Islandicus) which has an agreeable taste. The principal occupation of the men is fishing, which they follow both winter and summer. The women take care of the cattle, knit stockings, etc. They likewise gut and dry the fishes brought home by the men, and otherwise assist in the preparing this stable commodity of the country.
“Besides this, the company has yearly sent fifteen or twenty ships hither, and who possess a monopoly which is very burdensome to the country, export from hence some meat, eider-down, and falcons, which are sold in the country for seven, ten and fifteen rix-dollars apiece. Money is very rare, which is the reason that all the trade is carried on by fish and ells of coarse unshorn cloth, called here wadmal; one ell of wadmal is worth two fishes; and forty-eight fishes are worth a rix dollar in coin.”
The startling thing about von Troil’s letters is that they differ very little from Mackenzie’s account of Iceland in 1810, 38 years later, or even from Kneeland’s description in 1874, just over a hundred years later. It is accounts like these that make clear how trapped the people were by the small amount of useable land (one cannot say it was arable for it was only used as pasture except for the home fields and those were not cultivated, only fertilized), by the weather that would not allow grain to ripen, and by a Danish monopoly that sold commercial rights to a group of traders whose sole purpose was to extract as much wealth from the country as possible.However, something that is occasionally mentioned is that the lack of progress was also the result of a land rental system (share cropping) that penalized any land renter who improved his land. If he leveled the frost mounds in his home field, for example, the land owner would raise the rent.Any benefit from making improvements would not go to the renter but to the large land owner.
As much as the Hanseatic League traders exploited Icelanders, the turning over of trade to a commercial  monopoly was not unique. Numerous governments sold the rights of trade to companies, including the English government when it gave the Hudson Bay Company the right to vast amounts of Canada. There was no kinship between the kings and queens and the natives in North America, South America, Australia, the Dutch Indies, India. The people there were there to be exploited so that wealth could be accumulated in the “mother” country.
The surprising, even shocking element in Iceland’s story, is that there was, in fact, kinship between the Icelanders and the Norwegian and Danish crowns yet they were exploited as if there were no kinship. The Icelanders were not savages in a distant land. They were the descendants of Norwegians, Irish, Scottish, some Danish, settlers. They were Lutheran. They spoke a Scandinavian language. The farming landowners often sent their children to Denmark for their education. It made no difference. For whatever reason, the Icelanders were “other”.
When the Danish king came in 1874 to give Iceland a constitution, he said he was sorry that he could not speak or understand Icelandic but that his son was learning it. Iceland had been a vassal state of Denmark’s for hundreds of years but was so unimportant to the Danish crown that Icelandic was not learned by members of the royal family. The language, except for the romantic aura of the sagas, was relegated to all those other colonial languages that weren’t worth learning.