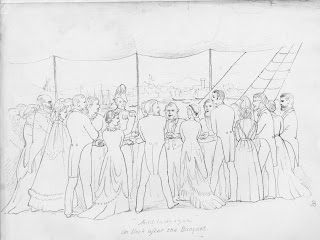 Sketch by Jemima Wedderburn Blackburn (1823–1909)
It’s 1878. John Burns has come to Iceland from Castle Wemyss on the yacht, Mastiff. He’s brought his wife and fourteen guests. Their purpose is neither academic nor literary. They’re in Iceland to see the famous geysers. In this, they join many other visitors who have come to observe, marvel at and try to understand the geysers.
Iceland is in crises. The weather, volcanic eruption, Danish rule and the stranglehold on the political and economic process by the ultra-conservative landowners has created poverty and hopelessness for many. Iceland is locked into its past by its elite. In the meantime, England has traded canals and coaches for railways. In 1806 the first fare-paying passenger train has gone into service. In 1863, fifteen years before the Mastiff anchors in the harbour at Reykjavik, England has its first subway. By 1800, London has a population of 950,000 and is growing toward what will become a population of 6 million in 1900. Reykjavik, the capital city of Iceland, may have a population of 2,500. That is what Trollope has been told but from his observations, he doubts the population is that large.
In Iceland, the country suffers from a history of Icelandic bishops determined to ban all frivolity, all entertainment unless it is religious. As well, there are not the resources to purchase the supplies necessary or provide support for the fine arts. The state of Icelandic culture is captured by Halldór Laxness, in his novel, The Fish Can Sing. It presents a tragic picture of an Icelandic singer who is supposed to be a great success in Europe. The local merchants believe that he must be a great singer because he can sing louder than the noise made by eleven hundred pigs a day being butchered in a slaughterhouse in Denmark. In England, that frivolity and leisure activity has turned into a sophisticated culture. The big news of the day is that an Australian cricket team has arrived. Oxford defeats Cambridge in their first golf match. Gilbert/Sullivan’s opera “HMS Pinafore,” premieres in London. What seems most amazing is that “the first rugby match under floodlights takes place in Salford, between Broughton and Swinton.”(Wickipedia) What would the Icelandic bishops thought of all that?
As different as chalk and cheese, the Mastiffs and the Icelanders. At dinner there will be sixteen English, fourteen Icelanders.
The guest list provided by Trollope includes the following:
Governor HILMAR FINSEN, and his wife, Lady OLUFA FINSEN.
Mr. THORBERG (Governor Praefect or Amtman) and his wife.
Mr. A THORSTEINSON (Treasurer)
Bishop P. PJETURSSON, and his wife.
Miss THORA PJETURSSON, his daughter (our particular friend).
Mr. J. PJETURSSON, (Head of the Superior Court.)
Mr. J. THORKELSON (Rector of the Latin College).
Mr. J. ARNASEN (Inspector of the Latin College).
SIGRIDUR JONSDOTTER and GUDRUN KNUTSEN (two beautiful
young ladies in full Icelandic costume).
Mr. JON JONSSON (Sheriff of Reykjavik).
(To an Icelander, the one puzzling thing about the guest list is why Thora, so often described for  her beauty, so obviously a woman, and definitely, the daughter of the bishop, would be described as  his son? However, it is an understandable error and, more to the point, it is an indication of what will happen to the Icelandic naming system in North America.)
To celebrate the supper, the Mastiff is decked out with flags and her guns are fired. The Mastiff’s boats collect the Icelandic party and bring the visitors to the ship.
Trollope is seated between the beautiful Thora and the Governor’s wife, Mrs. Finsen. Thora he leaves to entertain other guests and devotes himself to Mrs. Finsen. It is this same Mrs. Finsen who received Christian IX when he came to Reykjavik and did it so well that Bayard Taylor says about her, “The door of the Governor’s house opened and Madame Finsen appeared, dressed in a simple black silk, without any ornaments. She descended the steps of the first garden terrace, curtsied at the right moment to the royal guest, a little less deeply to the Prince, and accompanied them to the door. This sounds like a very simple matter ; but not many ladies would have accomplished it with such admirable grace, tact, and self-possession.”
Mrs. Finsen speaks English and Trollope says that during the course of the dinner that Mrs. Finsen tells him so much of her life that he might know an Englishwoman for thirty years and not learn as much about her. He describes Mrs. Finsen as “comely, brown, pleasant, smiling lady, with a large face, bright eyes, and a look of homely good humour that I have never seen excelled”. It might be a compliment but it has an edge to it and it is impossible not to think of some of the descriptions in Pride and Prejudice of the country behaviours that embarrass Elizabeth.
They have dinner but, alas, there is no menu to show what the visitors brought for this grand meal. What might there have been on the table that would have amazed the Icelanders? When the king banqueted, it was fresh grapes. After dinner there are toasts, then they all go on deck to dance. 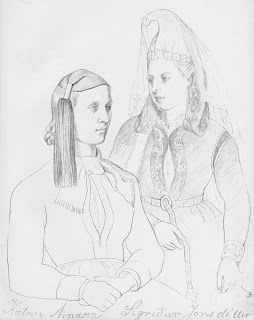 Sketch by  Jemima Wedderburn Blackburn (1823–1909)
Trollope is quite interested in the fact that “Thora was dressed as she might have been dressed in Paris or in London….Our other Iceland beauties, Sigridur and Gudrun, were there in the full picturesqueness of their native costume. It was all very unlike the dresses of our own girls, but most unlike no doubt in the head-dress. This consisted of a white hat, with, I think, yellow bands to it, made something in the shape of Minerva’s helmet, with the crest turned forwards. From this depended a light veil covering the shoulders, and hanging down the back, but leaving the face free. Then there was a jaunty jacket, partly open in the centre, with large bright buttons down the front and on the sleeves. The skirt beneath was of some bright colour, projecting forward like an extinguisher, coming even quite down to the ground so as to hide the feet, but with no inclination towards a train. In fact it seemed to be of exactly the same length before and behind. The head-dress, as may be seen in the excellent portrait furnished by our artist, for which Sigridur had that morning sat, is very pretty. The costume as a whole is picturesque and the jacket is becoming.”
After dining and dancing away the night, on Sunday morning, the English have a church service on board the ship, then go to a service at the Reykjavik church. There, Trollope notices that the ladies are all in their Icelandic costumes. He is told that the congregation has been ordered to show off their finery for the visitors.
There may be hunger abroad in the land and people trudging over mountain passes to reach harbours and ships that will take them, they hope, to a better life. There may be people who own little or nothing, who are considered such a burden on Icelandic society that their fares are being paid to North America because it is cheaper to get rid of them than for the sýsla to keep them. But, as always, there are those who are well connected, well paid, well fed, well dressed, well educated, well entertained. No one on the guest list will go hungry the day after the banquet, or a month or year after the banquet; none will dress in rags, will sleep with the cattle, will walk for days over mountain passes and heaths in a desperate hope of a new life in a New Iceland where they can have their own land.
The English guests, having proven excellent hosts and, having met their social obligations, are ready to turn to the true purpose of their trip. To the geysers. The marvelous, legendary geysers. The geysers that, today, still draw busloads of tourists from around the world. Except this trip in 1878 will be made on horseback.
(Quotes from How The ‘Mastiffs’ Went to Iceland, Anthony Trollope)