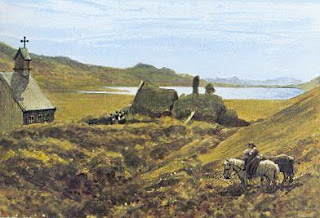 When I’m walking from Cattle Point to Willows Park in Victoria, I see the Sunday joggers. Pale legs, shorts, T-shirt, their faces pulled tight with pain. I’m encased in GoreTex and a sweater and shirt, wool pants. They slog by, whump, whump, whump, their Nike Air Max running shoes beating against the concrete. No knees in three years if they keep this up, I think. When I folk danced, the instructor wouldn’t let us dance without shock absorbent soles in our shoes, wouldn’t let us dance on concrete, wouldn’t let us stamp. If the runners passing me keep this up they’ll end their days walking like they’ve got legs carved from wood.

These are the weekend warriors. The Tarzans, the Roman centurions, the tribesmen hunting gazelles with nothing but their speed and a spear. Five days a week they sit glued to a chair, staring at a computer or answering a phone, drinking coffee and eating Tim Bits, their flesh loosening itself from their bones, then someone at the computer screen beside them goes toes up and that day they leave work early and buy sweat pants and shirt, shorts, running shoes. A day later they jog past me driven by fear.

I’m strolling along the sidewalk enjoying the view over the rose bushes that have been shaved by years of wind into an angle away from the cliffs. Two joggers stagger by. One of them has eaten 1376 donuts in the past year. That’s the only thing that will explain the loose rolls jiggling under his sweat shirt. His breathing sounds like someone dragging a metal file over granite. Behind them comes Harry. Harry worked down the hall from me. He had a passion for Danish, cream pies, chocolate croissants, butter. He’s twelve years younger than me but recently, his doctor told him that if he didn’t lose weight and get into shape he wasn’t going to be around much longer.

Men used to spend all day cutting down trees, digging holes in the ground, breaking concrete, picking rocks. My great grandfather and great uncles used to walk thirty miles from our home town of Gimli to Selkirk, buy a sack of flour, put it on a trump line or over one shoulder and walk back with it. There was no market for walking machines, no Nordic Track, no health clubs. There was just daily life. My father was amazed when he heard about rowing machines. Spending all that time going nowhere. He used to row his boat out to his nets, lift his nets, then row back to shore. He did it every day, sometimes twice a day, in the morning and evening after he’d spent eight hours cutting hair in his barbershop. He had a stomach of steel and could eat butter on everything including his oatmeal cookies.

On our block there’s a civil servant who power walks. He thrashes his way down the street like he’s a non-swimmer and someone threw him off the dock. He walks on his heels and swings his arms. If I swung my arms like that, I’d be afraid they might fly off. When he drives to the health club, he circles the block three times until he finds a parking spot close by rather than park three blocks away, then runs on a conveyer belt until sweat pours down from his crotch to his ankles.

I hate jogging. There seems to be a taboo against saying that. But it’s true. It has to be the most boring thing anyone can do. I know about endorphins and runner’s high. It isn’t worth it. Instead, I hike Mt. Finlayson. Mt. Finlayson isn’t a big mountain. Old people and kids can hike it but there are places where it’s steep. When I was hiking it once a week, I got so I could reach the top in an hour and come down in half that time.

Hiking uphill is more interesting than jogging. For one thing, you’ve got time to look around. There are banana slugs. Eagles. Hawks. The occasional deer. Waterfalls of ferns. Arbutus whose bark turns from pale green in spring to deep purple in winter. Cedar and broadleaf maples. The maples have licorice fern hanging from the crooks of branches. Old man’s beard and lungwort. I got runner’s high about one third of the way up. I also got my second wind there.

It’s amazing the things we can be vain about. I was quite proud of my hiking. I couldn’t run up Finlayson but I could go at a pretty steady pace. Feelings of superiority snuck in. I sneered quietly at the joggers straining by on the Esplanade. Then one day as I was descending Mt. Finlayson, I met a man coming up. Older than me. He stopped to say hi.

“What’ve you got in your knapsack?” I asked him.

“Magazines.” This was a large knapsack and it obviously was full. “I’m getting in shape for hiking in the Himalayas.”

I even met the occasional jogger on the trail. They’d come chugging by. These were the kind of joggers who run in marathons. Iron-men to be. The kind who’s bodies are encased in bone, not fat. They’d appear behind me, pass by me, and disappear on the trail ahead. Me-nearly-Tarzan kind of people. Maybe even Tarzan’s younger brothers. But they didn’t look like they were having any better a time than the Tim Horten’s men who jog the Esplanade.

Harry saw me and stopped to chat. “It’ll all be worth it,” Harry of the white legs, pot belly and red head-band declared, “when the endorphins flood in.” When he finishes wheezing, he gets me to admire his two hundred and ninety five dollar runners, his Gamin Foreunner 305 wrist watch and his Runlite 4 Hydration Belt. This is the third week he’s been jogging. He likes to be well equipped. He also thinks the equipment will be chick bait. Harry is sixty and given to strange fantasies.

“It seems a tough way to get some babes,” I replied.