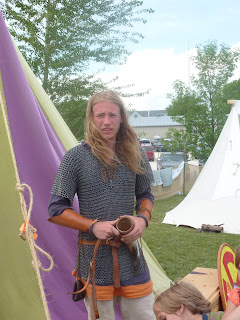 Photos by W. D. Valgardson
The vikings will be on the hill at Gimli. In their chain mail and metal helmets. They’ll roast meat on a spit. Work at Viking crafts. They’ll have mock battles. A short distance away is the Gimli Viking. Although he’s not authentic because of his horned helmet, he’s much loved. Thousands of people have been photographed standing in front of him. Bring your camera. 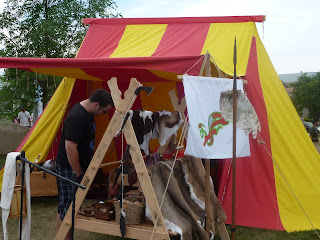 You know that it’s Icelandic Festival time in Gimli when you see the Viking tents go up, when you see people wandering the streets in clothes from Viking times. Islindingadagurinn. Icelandic Celebration. The long weekend of eating vinarterta, pönnukökur, rullupylsa, kleiner. Of drinking authentic Icelandic beer. Skal. And drinking kaffi. Kaffi is the national drink. At one time Icelanders infused a local moss to make a tea like drink but once kaffi appeared, no more drinks made from moss.
They used to put a hard piece of sugar between their teeth and suck the coffee through it. One piece of hard sugar might last three cups of coffee. My great grandparents saucered their kaffi, pouring it into their saucer (yes, coffee cups in those days had saucers, fairly deep ones) blowing on it, then slurping it. Their kaffi was saucered and blown.
Vikings didn’t have coffee. Tough on them. They had to put up with weak beer and mead (if they got to Europe). Icelandic Vikings must have had a hard time having fun. There wasn’t a lot to have fun with. No coffee, no brennevin, lousy accommodations on a long boat, having to row day after day. No wonder they were so grouchy when they finally arrived somewhere. The Vikings on the hill, I expect, in spite of doing their best to replicate Viking life, drink coffee. I think I’ve seen some takeout coffee cuts in the trash.
They don’t take slaves. The Vikings were slave traders. That’s one way to make sure your business makes a profit. Grab some people and put them to work without wages. Authenticity or not, I expect that the tourists would object to being carried off as slaves. Especially as when the weekend is over the vikings go back to jobs in grocery stores or shopping malls. It’s one thing to be carried off by a Viking in full armour, it’s another to discover he sells light bulbs for a living.
I like these Vikings. In spite of the swords and shields, the spears, they’re friendly. They really know their stuff. They love answering questions about all things Viking. They’ll even sell you some of the crafts they make.
I like hanging out on the hill. Just so long as they don’t make me drink mead. I drank mead in Sweden. From a horn. It was terrible. The mead, not the horn. The horn was rather attractive. The mead, not so much. If you want to get an idea of what it is like, put a shot of vodka into a glass with half a cup of water, three tablespoons of honey and stir. Don’t do this if you’ve got diabetes. 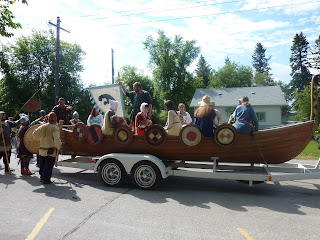 The Vikings will also be in the parade. These are the kind of Vikings that throw candy to you instead of pointing their spear at you and stealing your candy. Come and see for yourself. On the hill in Gimli, beside the harbour. The first long weekend in August.