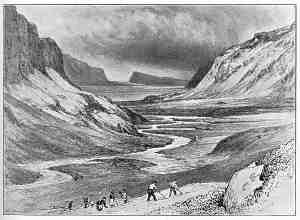 Just in case anyone has thoughts about how their ancestors must not have been very good at agriculture and if they’d just worked harder, been smarter, they could have grown oranges and watermelon, or even wheat and oats, here’s an account an abridged account of agriculture in Iceland in 1772 by Uno von Troil.
As may be seen in many passages of ancient Icelandic accounts, grain formerly grew in Iceland. At the current time (1772) “Governor Thordal sowed a little barley which grew very briskly but a short time before it was to be reaped, a violent storm utterly destroyed it, so that only a few grains were found.
“If we consider besides these strong winds, or rather hurricanes, the frosts which frequently set in during May and June, we shall realize there are a number of difficulties that check the progress of agriculture in Iceland. If notwithstanding these obstacles, it can ever be brought to a thriving condition, it must certainly be under the present indefatigable governor, who has the welfare of the country much at heart, and, in conjunction with the government, studies every possible means to promote it.
“I consider these violent winds, and the Greenland floating ice, which every year does great damage to the country, as the chief cause of the diminution of the growth of wood, as well as of the ill success in the late attempts for introducing agriculture.
“The ice comes on by degrees, always with an easterly wind, and frequently in such quantities, as to fill up all the gulphs on the north-west side of the island, and even covers the sea as far as the eye can reach. It also sometimes drives to other shores. It generally comes in January, and goes away in March. Sometimes only reaches the land in April, and remaining there a long time does an incredible deal of mischief. It consists partly of mountains of ice that are sometimes sixty fathoms high above the water”.
“The ice caused so violent a cold in 1753 and 1754 that horses and sheep dropped down dead on account of it, as well as for want of food.”  Hunger was so great that “horses were observed to feed upon dead cattle, and the sheep ate each other’s wool. In the year 1755, towards the end of the month of May, in one night the ice formed more than one inch thick. IN 1756, on the 26th of June, snow fell to the depth of a yard, and continued falling through the months of July and August. In the year following, it froze very hard towards the end of May and the beginning of June in the south part of the island, which caused a great scarcity of grass, insomuch that the inhabitants had little or no fodder the ensuing winter for their cattle. These frosts are generally followed by a famine.”
“Followed by a famine.” What do we know of famine in North America where grocery stores throw away vast amounts of food every day? Where even street people can get food from various agencies? Where schools often provide food? Where churches have programs to feed the poor? There is waste on a tremendous scale. There is unfairness built into the system. There are poor diets and hungry kids in school. But there is no famine. Famine is when there is no food. No food. Where people slowly die of hunger because there’s been cold weather, storms, no grass. There’s no food no matter where you look or how far you walk before you can’t walk anymore.
An inch of ice in May. Three feet of snow in June. Farm that!
There was nothing Icelandic farmers could have done against the storms. Nothing they could have done against the icebergs. Nothing they could have done with ground too cold to grow grass. Three months they had every year to harvest enough grass to feed their sheep and cows over the nine months of winter.

It was like a mathematical formula. Twenty people on the farm. Twenty people times nine months of skyr, Icelandic moss, preserved meat, dried fish, rye flour, butter, seaweed. Enough grass to feed four cows, fifty sheep times nine months. The horses, although critical to travel and trade, were on their own. Grass from the home field was too valuable to be wasted on horses. The sheep came first because they provided milk and milk meant staying alive and if you didn’t stay alive, you didn’t need a horse. Dead men don’t ride horses.