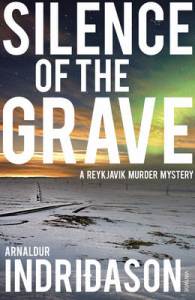 If you know someone who likes murder mysteries, you have to put this book under that person’s  Christmas tree.
In Silence of the Grave, we see the police detective, Erlendur, caught up in what looks like a death that happened so long ago that it no longer matters. As his colleague, Sigurdur Óli, says, whatever happened, happened a long time ago. If there was anything untoward in the death, anyone involved would be dead by now.
Sigurdur Óli is having his own problems. His live in partner is being overwhelmingly passionate and while he appreciates it, it also scares him because he senses that it is the precursor to a discussion about marriage and having children. During the course of the novel, he bobs and weaves, gives some ground, bargains for time.
Elingborg, the third member of the police team, is a bit frustrated by Erlendur´s dogged persistence over something that probably doesn´t matter. There can be lots of reasons why a skelton might be uncovered in the building of a housing development. People do get buried outside of graveyards. It could be a forgotten burial plot. The discuss, argue the possibilities, all the while that an archologist and his team are carefully clearing the soil away from the remains.
Erlendur has his own personal problems. He´s obsessesed by the death of his brother in a blizzard many years before. He was holding his brother´s hand and in the cold and snow let go. Erlendur was rescued but his brother was never found. He´s also trying to cope with two children he abondoned to their mother twenty years earlier. His daughter, Eva Lind, has forced her way into his life, angry, resentful, bitter, defiant, accusing. During the novel, she clings ot life by a thread.
The mystery of the skeleton ends up involving many people, unearths many stories, reveals a dark side to Reykjavik past and present. It´s a side of Reykjavik that tourists seldom glimpse, a world of drugs, prostitution, and violence.
Indridason, in creating the detective, Erlendur, has created a character who is anything but a super-hero. He is filled with regrets, self-recrimination, blindnesses, an inability to deal effectively with personal relationships. He’s human. And that humanity makes him attractive, compelling, a person worth knowing.
Indridason’s ability to create and control a highly complex plot line is great. The murder mystery is wound intricately with the stories of Erlendur’s two colleagues, his family, the back story of events that took place during WWII.
He creates his setting quickly, easily, making it easy for the reader to see where the events take place. He expertly uses the setting to fore shadow  later events. On page 20, the narrator says, “Four bushes caught his attention, standing up out of the brush about 30 metres away. He walked over to them, and thought he could tell that they were redcurrant bushes. They were bunched together in a staright line to the east of the foundation and he wondered, storking his hands over the knobbly, bare branches, who would have planted them there in this no man’s land.”
In reading a novel by Indridason, don’t every pass over details lightly, dismissing them. They’ve been chosen carefully and no matter how innocuous they might seem, they lead the reader relentlessly toward the ending.
How engrossing is this murder mystery? I started reading it on the ferry to Salt Spring. Kept reading it, stopped only to put the occasional log on the fire and to eat a halibut dinner. There was much to be done but I ignored it all until the novel was finished. I’ll have to work twice as hard tomorrow but once and Indridason novel is begun, it is hard to put down.