This is a difficult time for America. Strife stalks the land. There is division even at the highest levels of government. Yet, when I think of America, I always feel a sense of gratefulness.
This American Thanksgiving, I am thankful for Cottey College. For Nevada,  Missouri. For all the people I was privileged to know there.
After graduate school in Iowa, I couldn’t find a job so I went back to Winnipeg, Manitoba to teach English and Art at Tuxedo-Shaftsbury High School. Nice school but I wanted to teach college and, if possible, university. Around February I sent out job applications to many colleges and universities in Canada and the USA. Just before the Easter break, I received a letter from Dr. Hondrum, the president of Cottey College,
saying they might be interested in hiring me. He wanted me to come for an interview.
The moment the Easter holiday began, my wife and I bundled the kids into the station wagon and, headed for Missouri. We dropped off the kids with friends in Iowa City. Outside of Kansas City, we ran into a blizzard, not a snowstorm, a full-blown blizzard. We kept driving until we reached Nevada, Missouri. We found refuge in a motel. I wondered, as I saw the snow pile up, why we had come. I said to my wife, “We might as well have stayed in Winnipeg.”
However, he next morning the snow was melting. The daffodils showed through the snow. The redbud trees were blooming.
Cottey was a private women’s college owned by the PEO sisterhood. I’d been described as a diamond in the rough by some of my friends but it was a pretty rough diamond for a place like this. At one time it had been a finishing school, preparing young women to become the wives of successful men. That had changed and now the college was educating young women so that they could be successful in their own right. There still was
an emphasis on good manners and culture.
There was a red brick buildings in which there were rooms with original watercolors, grand pianos, antiques. People smiled a lot. My wife talked to staff members. I had my interview. We mustn’t have been too gauche because I got the job.
We returned to Winnipeg, spent the summer in Manitoba, but toward the end of August, we packed up and drove south. Nevada, Missouri, the Bushwacker Capital. This town was the scene of an ambush of Union soldiers that was repaid when the blue coats returned in force and burned the town to the ground except for the home of two sisters who had buried the soldiers who had fallen. My kids went to the same school as the kids of Frank James had attended.
It was a world beyond my ken. Mrs. Berry, the head of public relations, bless her soul, turned up the first morning with a home-made apple pie. The college greeted the new faculty and students with a watermelon picnic and a BBQ. The picnic was outdoors at the college’s club house that overlooked a small lake. I held my poetry workshops in the drawing room with the original watercolors and the grand piano. I held my fiction workshop at the clubhouse. The young women and I cooked breakfast in the club house kitchen before having classes in front of the fireplace.
The phys ed teacher gave my son private swimming lessons. The music teacher gave him flute lessons. We dressed up and went to Celebrity concerts of the kind you would only expect in a large university, not a college the size of a small high school. We met people like Leonard Nemoy. We went on bus trips with the students and staff to canoe on the Little Niangua River in the Ozarks.
Our children were in grade two and three. The students at the college were often homesick and missed their brothers and sisters so they adopted our kids. They took them downtown for cherry cokes a lot. Coca Cola with cherry  syrup was the drink of the day.
Every year we visited Silver Dollar City and when relatives came to visit, we took them all there. A local craftsman built me a dulcimer. We went to Arkansas as often as possible and, on holidays, we went to Galveston and Padres Island.
We drove to Kansas City on weekends where I taught a private fiction workshop in the basement of a bar.
The sound of the cicadas in fall was as loud as a winter storm blowing through Manitoba hydro wires.
Our children hunted Easter eggs in the Dean’s yard.
Cottey College was created by the PEO sisterhood and during the years I was there, 1970-74, 200,000 women contributed financially to the college. The college is larger now.
As for the rough edges, some of them got smoothed off as I, along with the students, practiced our manners. Good manners never undermined academic accomplishment, I discovered. 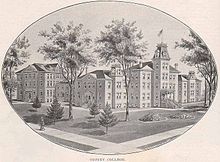 Four years of mimosa trees, pecan pies and people saying please and thank you. How could one not be thankful for that?