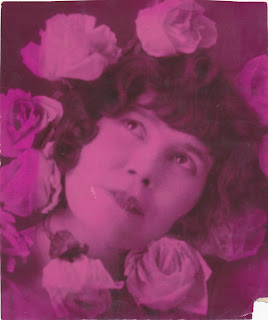 Today, as I sorted through a box of loose pictures from my mother’s  house, I came across a rather beat up envelope. It just had my mother’s first name scrawled on the front. I opened it. Inside was a treasure. For years, I’ve searched for pictures of my grandmother’s plays. Once in awhile I’ve found a photograph. Here, at last, were a half dozen pictures of actors in costume, of Blanche in costume.
Although she was married young and had four children, in spite of all the work that a wife and mother had to do in those days, no automatic washers, no dryers, no dishwashers, no electric stoves, she found time to write plays, act in them, direct them, produce them. My grandfather, Swanee, was a carpenter, and he built the sets for her.
She was born in 1896, died in 1930. She didn’t have a lot of time. But she made good use of it. She wrote numerous plays. She corresponded with an Icelandic actor in Hollywood. She wrote music and had it produced in England. She also wrote poetry and short stories.
In the envelope was her obituary. In Icelandic. I spent the entire day, it is now eleven p.m., translating what would be for a fluent reader of Icelandic, a few minutes work. Two lines I left out. The obit writer got poetic and completely defeated me. I don’t think my grandmother would have minded. She loved being on stage and, now, her grandson, eighty-two years later, is putting her back in the spotlight.
She died before I was born. I grieve that. I wish I had known her. How much fun it would have been to have an amma who wrote plays and music and poetry, who dressed up in costumes, and acted. How exciting life would have been with her living just two blocks away on the same street.
Her death was so painful that it was hidden away. No one talked about it. I’d never seen her obituary until today. I didn’t know until I was in my fifties that she had been a writer and that, all on my own, I’d followed the same path. Sorry we never met, amma. But here you are, centre stage once again.
That’s her far right, among the classy ladies of Gimli, 1920s style. 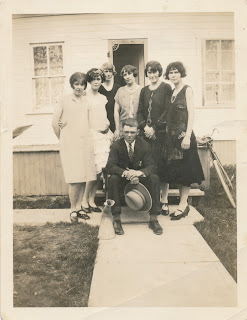 Mrs. Blanche Valgardsson
Born 21. March 1896
Died 2 May 1930
Mrs. Blanche Valgardsson, from Gimli, died in the General Hospital in Winnipeg. Because of her illness she had been moved there. After only a short time, she died. Before she died, she was constantly ill for a number of years.
Mrs. Valgardsson was the eldest child of Mr. and Mrs. William Herbert Bristow from Gimli. Mr. Bristow is English. He’s the son of Rev. W. J. Bristow who graduated from Balliol College, Oxford, and was the long time priest at Offenham, Worcestershire. His mother was Margaret Elizabeth Pruen Bristow.
Mr. Bristow’s wife is Gudrun Fridrikka Gottskaldsdottir. Her parents were Gottskalk Sigfusson  and Holmfridur Jonatansdottir, both of whom are long dead. Blanche married Sveinbjorn Valgardsson  . He was the son of Mr. and Mrs. Ketill Valgardsson of Gimli. Ketill came from Eyrarsveit in Snaefellsnessysla. Ketill’s father was Valgardur Jonsson, and  his mother Kristin Brynjolfsdottir Gunnlaugson of Bjarneyjar of Breidafjordur. Soffia, Ketill’s wife was from Laxardalur in Dalasysla. She was the daughter of John Sveinbjarnason.
Bjorn and Blanche were married on the 8th of Nov., 1913. Their children are Earl Sveinbjorn, Alfred Herbert, Kelly Allan Arthur, Forence Glady Gudrun.
Sveinbjorn was a carpenter but sometimes he went commercial fishing. The long illness of his wife was difficult but he did his utmost for her and dealt with her illness wonderfully well.
The struggle against death was long and the death of the young mother a great loss. Along with Bjorn, there are four children to mourn her loss.
Mrs. Valgardsson was highly artistic and talented and loved art of all kinds. She had been involved with drama for some time in Gimli. Her funeral took place from her home on 6 May. A large number of friends and relatives attended the funeral. She was laid to rest in the Gimli graveyard.
Sig. Olafsson.