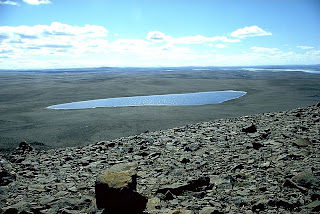 SUMMER TRAVELLING IN ICELAND;
by John M. Coles, Edward Delmar Morgan
BEING THE NARRATIVE OF
TWO JOURNEYS ACROSS THE ISLAND BY UNFREQUENTED ROUTES
1882
Two young men, John Coles and Edward Morgan left the docks at Leith in the Danish mail steamer “Valdemar” on the afternoon of July 28th, 1881. The ship first stopped at the Faröe Islands to discharge a large cargo of flour. Their first experience of Iceland is before they reach Iceland for the steward had put a large package of hákarl in their cabin.
It took thirty-eight hours to go from the Faröes to their first sight of Iceland. They arrive at Reykjavik at midnight, the weather is perfect, not a cloud in the sky and the water as smooth as glass. They make the obligatory visit to his Excellency the Governor and the Principal of the College. They hire guides and horses and start for the interior.
They visit the geysers and Gulfoss, then tackle the lava desert.
„We had now reached the highest point of the Sprengisandr, and, starting afresh, began to descend gradually towards the north….sand and lava dust varied at times by thickly-strewn blocks of lava. Soon after leaving our halting-place, a considerable breeze sprang up, and the dust raised by the pack-train was most disagreeable. In spite of this, however, our guides began to sing a song which has special reference to this journey. I had often heard them singing it since we left Hagaey, and had managed to catch the air and some of the words; they sang it slowly, and the commander-in-chief, forgetting for the time his exalted position, joined in with an energy, so catching, that in a short time we were all at it.”
The song, of course, is that which is the favorite of every gathering of Icelanders of North American descent. It is so loved that when Peter John (PJ) Buchan, an instructor from the Department of Icelandic at the University of Manitoba, performed it at an INL conference, he had to sing it not once, not twice, but thrice. The crowd joined in, just as John Coles and Edward Morgan joined the Icelandic guides in 1881.
Riðum, riðum, rekum yfir sadinn,
Rökkr fer að siga yfir Herðubreið
Alfadrottning fer að beizla grandinn
Ekki er að vera á hennar leið.
Vænsta klárinn vildi eg gefa til
Að vera kominn o‘ni Kiðagil.
„The effect of this song when sung by several voices is by no means unpleasing. Our people certainly performed in a manner that was highly creditable to the power of their lungs; Evandr‘s whole heart seemed to be in it.“
Oh, to have been there with them, in the heart of the Sprengisandr, riding Icelandic horses, singing Riðum, Riðum at the top of our lungs. What greater moment could there be than that?