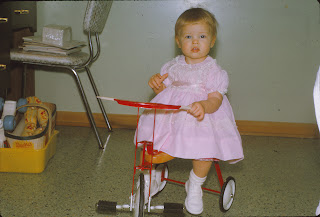 I dredged them out of the crawl space. Plastic yellow and red boxes filled with 35mm colour slides, strips of black and white film in brittle paper sheaths. They’d made many moves, Winnipeg to Riverton, to Snow Lake, to Pinawa, Manitoba, then off to Iowa and Missouri and, finally, to BC. Here, they’d moved to four different houses. The evidence of those towns and cities is all there, although some places spark no memories. Perhaps they were taken during a move but why did I take them? It’s a mystery.

I’ve had to relearn how to use a scanner, to master some new programs, although master is probably the wrong word since I’m struggling to understand some of the functions. I’ve managed to copy the slides and film onto the computer.
The first thing I’ve discovered is that even in their plastic boxes, the pictures are covered in dust. I’ve had to go to London Drugs to buy a lens brush. I’ll have to start all over again, cleaning slides and film strips before I make a final copy.
Dust or not, I’m reliving my life. Once again, my daughter is all dressed up in a pink dress, sitting in her high chair, reaching for the birthday cake her mother has made for her. In another picture she is sitting astride a kiddy car (at least that’s what I think we called it). It’s got bright red metal pedals, a wooden seat. She’s got on white shoes and white socks with her pink dress. I’m not sure she’ll be able to reach the pedals. She’ll grow into her gift.
But who gave her this locomotion, this childhood treasure? Did we buy it? Is it from her grandparents?  I’ll have to call my ex. She remembers everything. Like most men, I’m not good at details. She was at home, spending each day with our daughter, taking care of her, helping her, teaching her, making the world a good place for her. I was off every day teaching school.
That’s the problem with being young and having children. Young is a very busy time of life. Going to school, getting a job, working for advancement, buying a house, a car, furniture. We were fortunate because my wife was able to stay home. But I was learning to be a high school teacher and tutoring on the side.
There’s another picture, earlier, taken from the back as our daughter is teaching herself to walk. She’s using the edge of the couch to help her pudgy little legs hold her up.
I remember that couch. All we had was a hundred and fifty dollars. Even in those days a hundred and fifty dollars wouldn’t buy much. A friend of a friend sent us to a factory that made furniture. That’s what I loved about Winnipeg. There was lots of manufacturing and if you couldn’t afford Eaton’s or The Bay, there was usually a connection that would get you through the door of a wholesale.
Even the wholesale didn’t have anything for a hundred and fifty dollars. But, the owner, seeing two broke kids in desperate need said, “You know what? Someone ordered a couch. They put on a down payment then didn’t want it. Custom made. One fifty and it’s yours.”
Green fake leather. Built for giants. It was the biggest couch I’d ever seen. We took it. We could seat the whole family on it. It was not built for moving but we moved frequently and we took it with us. What else can you do when you get a great Winnipeg bargain? Years later when we left for Iowa so I could go to graduate school, we didn’t haul it with us. I wonder what happened to it? I’ll have to ask my ex.
Each day, I send my son and daughter a picture from their past. My son wrote back and said he remembered the sandals he’s wearing at the cottage in Gimli. They were a bit too long and he kept stubbing his toes. He admires a flowered shirt that I’m wearing at the beach and says that he’d wear a shirt like that. In those days I wore nothing but flowered shirts. I’d forgotten. When we moved to BC, I adopted the local camouflage, plain shirt, tie, tweed jackets, wool slacks in winter, cotton in summer. I gave up my cavalry boots for shoes.
I go back time and again to the picture of my one year old daughter on her kiddie car. My heart aches as I look at her for with the picture comes the memory of picking her up, holding her, helping her learn to walk.
I would that I’d taken a thousand thousand pictures of her and her brother but I came from a family that hardly ever took pictures. We have to make do with these few small treasures.
When my daughter saw the picture of her one year old self in the high chair reaching for the birthday cake, she wrote back and asked, “Is that me?”  Yes, yes, that was you. It all seems quite magical, birth and growth and aging. All the people we have been. Yes, let me remind you of your younger self.
A busy time. Lesson plans. Grading papers. Tutoring to make extra money. Taking classes for a BEd. Writing. Writing. Trying to get published.
But there was time for a cake, for a birthday party, for presents, for a pretty dress, for a photograph.
Thank God for that photograph.