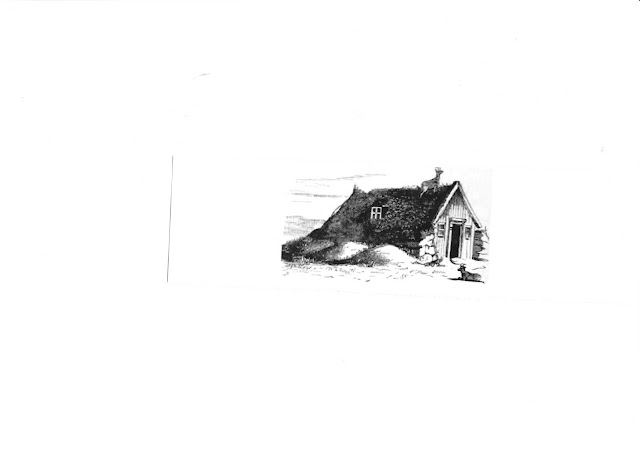 Waller arrives at Sorg. He sends his guide, Bjarni, off to Reykjavik on errand. Waller enjoys sports fishing and he asks the local farmer to take him to fish. When they arrive at the river bank, the farmer says, “It’s cloudy. That’s good. The flies won’t bother us. The farmer tells Waller some stories about how dreadful the flies are and Waller dismisses it all as exaggeration.
He has a wonderful day fishing. Every time he casts his rod, he catches a fish.
When Bjarni returns, Waller asks him to go with him to the nearby lake. But, this time, the sun is hot. When they get close, they can see “a sort of mist hanging over the shore.”
“ ‘Oh, Helveta!” said Bjarni, “the flies are up.’ “
Suddenly, Waller begins to feel hundreds of sharp little stings. A wind comes up, chases the flies away, then the sun goes behind a cloud and all seems well. Waller begins to fish.
Iceland may have not fierce tigers or lions, no venomous snakes, no rampaging elephants, but it has its hoards of midges and just after Waller has hooked his first fish, the sun comes out again and, in a moment, “ ‘the devil was unchained’ “…from the earth, the grass, the rocks, in fact, from everywhere rose a living fog of countless myriads of long winged flies.
“Sting, sting, sting, on they came. It was useless to attempt to beat them off. We had our handkerchiefs out in a moment, and tied them round our heads, leaving a small slit for one eye….We pulled our socks up over our trousers, put the wading boots over the socks, tied string round our sleeves, and attempted to get away.
“our poor horses, maddened by the attacks…had galloped away….My broad-brimmed hat was weighed down upon my shoulders by the heaving masses of these insects. Not a spot of colour of my coat was visible…(Bjarni) had the  appearance of a  man wrapped in a living cloak, and as he walked, solid lumps of flies fell from his back on to the ground.”
Bjarni chases after the horses, gets them and brings them to Waller. “They (the  horses) were covered with blood, and much frightened….Murder’s white coat showing the (blood) stains very vividly. His eyes were swollen and full of flies, as were the nostrils of both.”
When they get back to the farm, Waller discovers that his face, neck, and wrists were swollen dreadfully, and covered with bites, and his right arm was covered in a rash from the shoulder downwards.
No crazed berserker could have been more formidable than the tiny Icelandic flies for what they lacked in size, they made up in numbers. Myvatn, midge lake, takes its name from them, midge water, but the name seems harmless enough. Even in Canada, Mosquito Lake doesn’t conjure up a desperate fight for survival against a tiny enemy. Although, when I taught at Snow Lake, Manitoba, I went fishing in a creek when the black flies were out and my daughter’s sweat shirt came loose at the back without our noticing it for a few minutes. By the time we did notice, it looked like she had a cluster of grapes on both sides of her spine.
The farmer, on the first fishing expedition, had said to Waller, that two horses had died from fly bites and Waller had thought it a gross exaggeration. By the time the second fishing trip is over and he and Bjarni are back at the farm, he knows it was no tall tale.
The next time you visit Iceland and go to Mývatn, think of Waller and his desperately running for a mile before he escapes from the midges.