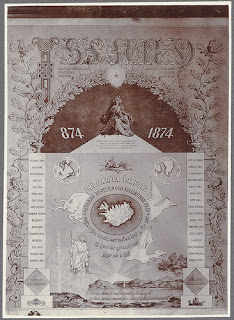 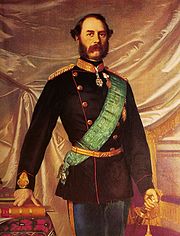 In diplomacy, momentous decisions are often made not in the heat of battle or even argument but over the dinner table, at celebrations, in nooks and corners, by men (in 1874, it was all men) dressed formally and immaculately. The appearance belies the raging undercurrent, the years of meeting, negotiating, the successes and failures, the vested interests.
King Christian IX arrives in Iceland, not as a conqueror but as an absent and distant king. Iceland has not suffered conquest and war but centuries of neglect and exploitation. It has been seen by the Danes as little more than colony from which some profit might be extracted. However, unlike the natives of South America, they are not enslaved to work in the gold mines. There are no gold mines. There are, for a time, sulphur mines but economics means they are abandoned. There are no diamonds, rubies, no minerals, no vast forests that can be used for buildings ships, no exotic spices. There is fish. There is wool. There is meat pickled and smoked. There are horses. None of the products are in great demand, nor does the size of the population mean that what products there are, mostly woolen goods, can be produced in vast amounts.
There is no mechanization. Everything is done individually by hand.
Iceland and Icelanders are more than anything, a curiosity. Unknown largely, enough off the beaten track that foreigners who want to visit need to rent or buy a yacht, man it, provision it, sail into unpredictable and often fierce weather.
With no wood suitable for building, no lime for mortar, so little fuel that houses don’t have stoves, Icelanders have taken to building houses from layered rock and turf. There are no great cathedrals, no vast public buildings, no great residences. There are farm houses, some as good as those of a well-to-do Scottish farmer, others no more than hovels where people live as if they are underground.
None of this keeps Icelanders from wanting their independence back. They agitate for the right to their own government. They negotiate, they argue, they wear down the opposition of the few people who make themselves wealthy on the current system.
When, at last, King Christian IX comes to Iceland for the first time to bring them a constitution in 1874, there are festivities. The people put on the best show they can manage.
Bayard Taylor, an American reporter, describes one of the major events that is held in the open after the King has been feted at a banquet in Reykjavik.
“The road which was so broad and smooth that it must have been specially made for the festival, now   crossed a long hollow in the stony soil, and climbed a hill opposite, nearly a mile away, where flags and tents, and a moving multitude announced the location of Austurvelli. The broad, rounded summit of the hill had been laboriously cleared of stones, and furnished a space where four or five thousand people could have been accommodated; but not more than two thousand were present. There were a a rostrum for speeches, a tent for the King, another ten which suggested a possibility of refreshments—and that was all. But the elevation, slight as it was commanded a singularly bleak and sublime panoramic view. On all sides the eye overlooked great spaces of sailless sea or barren shore, until, fifty miles away, ranges of dark volcanic hills inclosed the horizon. The level evening sunshine fell coldly across the vast view, the wind blew sharp and keen from the north, and, with every allowance for the tough constitutions of the Icelandic people, I could not see how much festivity was to be extracted from the place, time and temperature.
“Nothing was done, of course, until the King’s arrival….In Iceland nothing is done without singing, and it is the most attractive feature of the celebration thus far. The song was followed by speeches from the rostrum, chiefly greetings to the people, winding up with sentiments and cheers. Admiral Lagercrantz spoke for Sweden, Rolfsen, the author, for Norway (and his eloquence awoke a real enthusiasm), and then various others followed, the admirable male choir of Rejkiavik (sic) interrupting the speeches with national songs.”
It is one thing to say we celebrate June 17 at the statue of Jon Sigurdsson on the Legislative Grounds. Hip hooray. But have you ever wondered what it must have been like in Iceland on this momentous occasion?
Did you imagine the cleared hilltop, the flags, the tents, the stage, the dignitaries. These are our ancestors participating, listening, discussing observing. This is what this important event was like for them.
Terrible weather. Cold wind. Rain. As usual. They partied anyway. And why shouldn’t they? There weren’t a lot of reasons to celebrate. These events would give them something to talk about all through the next winter and for many years after that. Who came, what they said, how they behaved would be described and analyzed. After all this time, the King had come, he’d been friendly, outgoing, pleasant, talking to Icelanders of different social classes, shaking hands. He’d brought and left behind a constitution.
After a very long time, there was, at last, hope. That, in itself, was worth celebrating.
This visit was the culmination of many years of discussion, arguments, persuasion, agitation, not violence, no bombs, not bullets, not slaughter, and the agreements that had been come to were now being implemented with banquets, with speeches, song and poetry. Would that song and poetry could celebrate the separation of those geographic entities that do not want to be joined. Would that both sides could join in.  Would that Croat and Serb, Southern and Northern Irish, Chinese and Tibetans, all could follow the Icelandic-Danish solution.