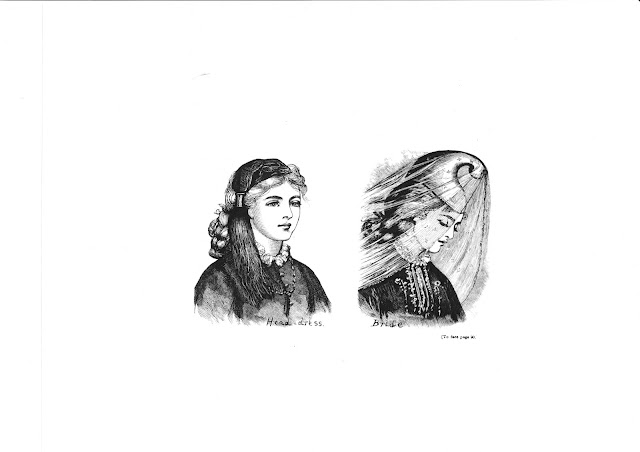 As our young English painter, S. E. Waller continues his journey sketching saga sites, he goes to Kross.
While he is there, he is told that a wedding is going to take place. He wants to see as much about the manners and customs of the country as possible so he is keen to attend. The wedding is to occur at twelve o’clock. All he has is his traveling clothes so he combs his hair and puts a coloured handkerchief around his neck.
When he goes out of the house, he sees a lot of little dots on the horizon but they quickly turn into trains of horsemen. They’re the wedding guests of course, and they come in parties of five or six, dressed in every sort of Icelandic costume.
Everyone in the house is busy so Waller, the gregarious fellow that he is, goes down the muddy pathway and greets the guests as they arrive. He can’t speak a lot of Icelandic but he says he shook hands with the men, took off his hat to the women, and kissed the children and it all worked out fine.
The guests have had long, wet rides. Some are muddy and they sit on the grass to change their stockings before going into the house. There’s a fair amount of drinking going on in the house and after everybody has had something to help them overcome the fatigue of their trip, they march out of the house in couples, led by the bride and groom to the tune of one of the most dismal songs that Waller has ever heard.
The women, he says, are wearing wadmal dresses but the bride wore a large faldr. The bridegroom was old and fat but good-natured. The bride was much younger and a dreadful shrew. Waller said he felt sorry for the bridegroom. Because he is English, he doesn’t understand that a man cannot marry unless he is worth four hundreds, that is, the worth of four cows. Seldom would any young man be worth four hundreds. The young woman will not have chosen her husband. Her father will have arranged the marriage and she will be under great pressure to marry and move out for it is likely that her parent’s home is crowded. With her gone, there is one less mouth to feed. Behind the picturesqueness of the landscape, the clothes, the language, is always the need to survive. It is 1872, the mass migration to America has just begun.
The ceremony takes about three quarters of an hour. There’s a prayer, hymn, exhortation, and blessing.
The wedding dinner took place at a house ten miles away. Sixty men, women and children, he says, start off “trotting, galloping, and tumbling, over hills, through water, and into the bogs, amidst plenty of good-natured laughter. And talking of the children, how they do ride! Behind me for ten miles of most difficult country rode two little girls astride, with halters for bridles, on two raw-boned Iceland ponies. One was nine years old, the other seven, and they went splendidly, and enjoyed the journey more than any of us.
“When we reached the farm where the feast was to be held we found tents had been erected to accommodate the numerous company, and in one of these (a spacious marquee about four feet high, in which we were obliged to sit because we simply could not stand) the dinner was prepared.”
Everyone wants him to stay. He’s obviously made a good impression on the Icelanders. However, he explains that he has to get to Selja that evening. He says the countryside they had to cross was nasty for riding and they had much difficulty in crossing two rivers swollen by rain. At each river crossing, they had to hire a local guide to show them how to get across safely.
What risks Waller takes, riding through the heaths and bogs, risking quicksand and bottomless mud, crossing rivers with rocks rolling along the bottom that could break a horse’s leg or sweep its legs from under it, getting soaked in glacial water, riding for miles soaking wet, putting his life completely into his Icelandic guide’s hands, confident that they’ll find shelter. Yet, what rewards.
Before the wedding, he has attended a confirmation. He has seen things and met people like he’s never met before. He’s taken into people’s homes, shared meals with them, sung with them, struggled to communicate with his limited Icelandic. He’s been wakened in the morning by, as he says, a very pretty young woman, bringing him coffee and something to eat for breakfast. What young man wouldn’t want these experiences? How could life be any more interesting or thrilling? He’s living a mad, romantic adventure as he rides from place to place so that he can make sketches of the places in Njal’s saga. He’s treading on the ground of his heroes.
What young man’s heart wouldn’t beat faster when faced with a dangerous river crossing, his guide a pretty young woman who, when she gets him safely to the other side, turns on her horse, kisses him on the cheek and, before he can react, plunges  her horse into the current and makes her way to the far bank?
1872. More than a hundred years ago, approaching one hundred and fifty years, but Waller singing with his hosts, sharing their meals, riding over vast expanses of wasteland, being kissed, all come alive as if it were yesterday. There is nothing ornate about his writing, thank goodness. It is heartfelt, honest and enriched by an artist’s eye for details.