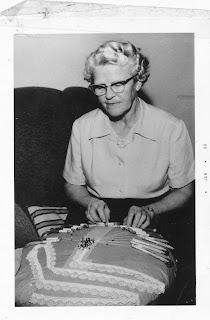 The dead hands of the Icelandic Bishops lay heavily on the lives of people for many generations after the Bishops had died. Their stern, disapproving gaze touched lives half a world and centuries away.

Bishop after bishop declared his hostility to dancing. In Scandinavia the opposition to dancing was to doing so in churches or churchyards, after funerals. In Iceland, dancing was considered evil all the time, in every place. But the Icelandic bishops’ opposition went far beyond that. In the 18th C., Christian VI sent

Ludvig Harboe, a Danish priest to Iceland to check on the status of religion and church affairs. (Shades of Christianity Under the Glacier). Harboe and Jón þorkelsson wrote a report for the king. The king responded by issuing decrees in 1741 and 1746 that prohibited Icelanders from any type of amusement unless it was religious.
Culture arises out of  leisure activities. In an agricultural society those leisure activities are often connected to the seasons and harvest. Dancing, singing, feasting, playing games, courting, rituals, all normally play a part in the changing of the seasons. Given the short growing season in Iceland and the long, harsh winters, one would normally expect a great deal of ritual and traditional behaviour, the involvement in public folk lore. Iceland was locked in poverty for long periods of time. Sometimes, epidemics swept away twenty  percent of the population. Farms were isolated. Yet, all of these qualities would be expected to help create folk art, not suppress it. One would expect a rich folk art life.
Instead, Robert Burton says of Iceland in his book, Ultima Thule or, A Summer In Iceland, published in 1875:
“Art simply does not exist in Iceland and, to judge from the little museum of Reykjavik, it was always rude as that of Central Africa: the only attempt appears to be on the part of the goldsmith. There is a single painter at Reykjavik, and his career has been cramped by inability to study in lands where the sun shines. The sculptor and architect have no business here.”
When the Icelandic settlers came to Canada, they brought books. Most of those were, as the bishops had decreed many decades before, religious. Eventually, black Bibles filled boxes at the nursing home in Gimli. What they didn’t bring was art and, because of that, although the emigration is known in words, it is not known in drawings or paintings from that time. Poverty, illness, lack of materials, all would have contributed but other groups suffered privation, yet privation did not keep other groups from creating artwork.
My great great grandfather, Valgardur Jonsson and his son, Ketill Valgardsson, came to Canada in 1878. Valgardur died two years after arriving at Icelandic River. Ketill, although he was young and without resources, made a life for himself. He worked on the railway and fishing. He moved to Winnipeg, working for the city as a laborer and then as a foreman. In 1894, he started a dairy business. Later, he moved to Gimli and started a flour and feed mill.
He had three children, Swanee (my grandfather), Valentinus and Kristin. Swanee married Blanche Bristow. Blanche’s father was English and her mother,  Icelandic.
And here, the invisible hand of the bishops reached through time and space. Not in disapproval because my paternal great grandfather was English. But because of something Kristin did in 1916.  Five young people took a sailboat to go berry picking. They were caught in a storm and all five drowned. Blanche’s two brothers,  Alfred and Herbert, were two of the dead.
The drownings were a terrible blow to the community. This was a community that already had been devastated by the deaths of the small pox epidemic, a community that had been torn by religious strife. A community that had lost many people as they had moved away to farm better land.
At the funeral for Alfred and Herbert, Stina who was around sixteen and already an accomplished photographer, took pictures of the funeral procession and sold them to The Winnipeg Free Press. The community was outraged, in part at the idea of pictures being made of a funeral and, in part, that they would be sold. And, in part, that the photographer was a young woman.
But Stina Valgardsson Johnson (she married Mindi Johnson)was one of the women who were forcing their way out of the tight little box Canadian society and the Icelandic community had created for them.
She continued her photography. Today, her photographs are in the Manitoba archives. Some are famous. They hang in the National Library in Ottawa. They appear in books and on brochures. However, she didn’t just do photography. She did all those leisure activities the bishops would have so disapproved of. She sculpted and did ceramics. She practiced virtually every craft. At Icelandic events she was often found dressed in her Icelandic costume, making lace. 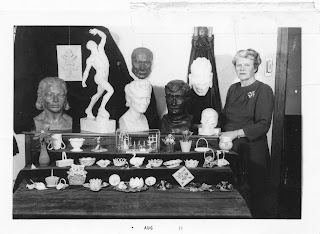 But it wasn’t easy. She could have stuck to just making pönnukökur. She wouldn’t have been mocked for making Icelandic pancakes. When she came to Gimli to take photographs, to draw or paint, to show her sculpture, she was mocked by many. As Burton said, there was no tradition of art in Iceland. There was no tradition to bring with the settlers. In 1878, when Jemima Blackwood, England’s beloved illustrator of animals and country life, came to Iceland, there were no artists to meet her or for her to meet. It was unlikely that anyone knew who she was.
Stina, with her will of iron, kept producing art. She took photographs, not snapshots, photographs, and she sculpted, and she produced ceramics and crafts of all sorts. It was the world of Manitoba and Iceland that changed to catch up with her.
In Iceland, the change happened after the emigration. In Iceland it was like the people, freed to be creative, were determined to make up for all the years their creativity had been imprisoned. Nowadays, Iceland is a nation of musicians, dancers, artists, craftspeople. The dead hand of the bishops has been pried from the Icelandic soul.
And Stina? Her art has been forgotten but she has given us a legacy of photographs and when she finally quit photography, she gave me her darkroom equipment. 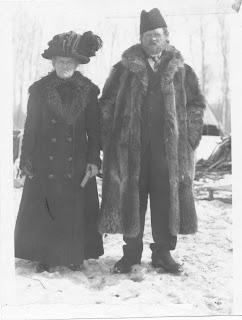