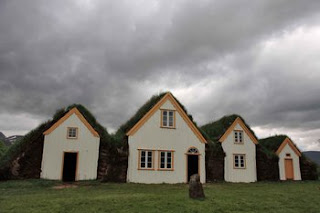 In Iceland, turf houses
This story probably has a thousand variants. It has been told by many people over a long period of time.
Like many folk tales it is about good and bad, about reward and punishment. It very definitely does not adhere to the belief that was current a while ago that “greed is good”.  Folk tales often have about them an element of teaching the listener or reader correct behaviour. This story does not end with a stated moral. In that way, it is not a fable. Rather, it is more like an episode out of the sagas. Perhaps, its theme could be found in Havamal.
Conditions in Iceland, with the beginning of the Little Ice Age in 1350, began to deteriorate. It only takes a difference of a few degrees to keep grain from ripening. Icelanders had been able to grow hardy crops and some records appear to show, even grow a surplus that could be exported. That changed with the drop in temperature. What had been a multi-crop economy became a one crop economy, hay. Although hay could grow and be harvested, a further drop in temperature created by unusually cold weather or by ice filling the fjords, meant that hay would not grow that particular summer.
The weather, the volcanic eruptions, the earthquakes, were so unpredictable that every effort had to be made to accumulate food for people and fodder for the animals during the growing months. Every bit as serious was the lack of fuel. Brown coal was used wherever it could be found, peat cut and dried, sheep manure pressed and dried, dwarf birch sticks. Icelandic farms didn’t have stoves. Stoves require wood or coal and lots of it.
The turf and rock houses of most of the people are described as wretched. There was nothing romantic about living in a house made of lava rock and turf.
Is it any wonder that people fantasized about better lives, about people like themselves except better dressed, better fed, better housed, with gold and jewels and warm fires? Why wouldn’t they? Dreams give us solace when life disappoints us. 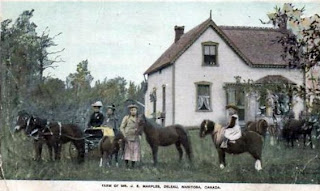 The dream in Canada. Free land and houses like this.
In this version of “Gypsy Clothes” what has changed is the location. The setting is still a farm but the farm is now in New Iceland. The time is, as always, Christmas. The virtue of the main character, Kristin, is that she is generous and kind to people who look like beggars. The sin of the evil mother is her lack of generosity to people she considers inferior to herself.
A reader can easily see how daughter and mother would be judged in Iceland where hunger always threatened and was often present. Not just hunger but starvation. People, through no fault of their own, bad weather, natural disasters, were driven onto the mountain paths seeking food. Their lives depended on the generosity of others.
In New Iceland on Gisli’s farm, there is no threat of hunger. The mother acts out of selfishness and self-importance. The revenge is swift and brutal. The good are rewarded and the bad punished.
However, the story goes beyond the simple retelling of the tale to raise questions about the transference of the folk figures from Iceland to New Iceland. The local people in the story speculate that the farm visitors must have been foreigners. One woman says it was the huldfolk but she is hushed. Instead, the actions of the visitors are transferred onto other possible immigrant groups. Other immigrant groups are exotic, strange, mysterious, capable, in our fantasies, of anything. 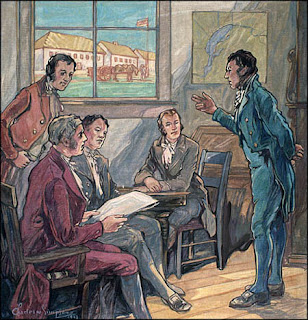 This is a story with new possibilities, with not just the joining of an invisible person (which is also told in Icelandic folk tales) and a visible person but of choices, of new places. This is why people shouldn’t refer to the huldafolk as elves. Not that there are not elvish names for them in Icelandic but because the term has been taken over by Disney, Hollywood, etc. The huldafolk are God’s childen just as we are. They are not gnomes or dwarves or monsters. This is why it is a travesty to see, in Iceland, people making small elve’s houses for the tourists, as if the huldafolk were Irish gnomes. Remember, the huldafolk are Eve’s children, made invisible not because they had sinned but because Eve lied to God. Because they are human, just as we are, is why, from time to time, those who are invisible marry with the visible. As our ancestors lives became better, became more like the imagined world of the huldafolk why shouldn’t they join together?
Is it not because our ancestors were able to imagine, through their beliefs in the huldafolk, a better life, that your ancestors and mine risked their lives to come to this new world? If they could not imagine the possibility of a better life, a life like that of the huldafolk, why risk the ocean voyage, why die and be buried in a lonely cemetery at Quebec City or Gimli or Grund or a thousand other places. It was their desire, their dream, to live like the huldafolk. 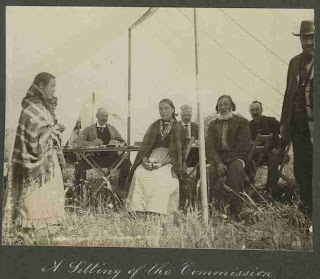 This story is about more than just folk beliefs. It is about our reaction to “others”, those people different from us, it is about kindness and self-importance, about dreams of a possible better life. Today, the food we eat, the houses we live in, the luxury that surrounds us, is the life envisioned for the huldfolk. Food everywhere, vast amounts of it. Warm, dry houses. Good clothes. Medicine to treat our diseases. Jobs, no matter how much we grouse about them, that are beyond compare better than being an indentured servant. 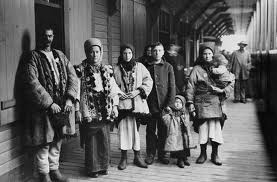 Some people, having read WTBS, have told me that there was never any mention of ghosts, trolls, huldafolk, magical creatures in their families, just as some have told me that there was no religion in their families. Their parents often said, “We are in a new country. We don’t need any of that anymore.”
However, others have told me about all sorts of “others” who came with their families: trolls, ghosts, fylgjas, huldafolk, the devil himself. As for my family, we had a troll who lived in the basement cistern. I was terrified of him. I have known people who took and take fylgjas for granted.
Perhaps these others have faded away in this scientific age or, perhaps, when nothing works, when the internet becomes a mystery, when people behave in untypical ways, when accidents happen, we might have reason to believe that “others” are still around.
Sometimes, no matter what one does, everything goes wrong but, equally, I have often felt that when I’ve been in difficult and dangerous conditions that it’s more than just me who got me out of them.