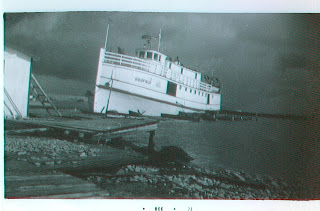 Lake Winnipeg is big. People who haven’t travelled on it don’t realize just how big. There 9,465 sq miles of water. It’s 300 miles long and, in places, 50 miles wide. It’s a lake of ferocious storms with winds from Hudson Bay combining with shallow water,  creating dangerous waves. It’s a lake made for drowning. In winter, it’s a great plain of ice, driving winds, drifting snow, booming cracks.

It’s a lake filled with fish. The native population fed themselves on the fish. In 1875, the Icelandic settlers arrived. Flummoxed by fish that weren’t cod, by water that froze six feet thick, by having nets meant for the ocean but useless in fresh water, the best they could do was catch enough fish to stay alive. However, it didn’t take long for them to learn the skills that were needed, to build boats for the open water, to make nets that would catch whitefish, pickerel, sauger, jackfish, sunfish, goldeye, fish that could be eaten fresh, wind dried or smoked. Fish that could be transported to Winnipeg to be sold or traded.

The Icelandic settlers were mostly sheep farmers but, in Iceland, once the hay harvest was in, hired men and even the farm owners walked or rode to the coast to fish during the winter. Iceland’s was a survival economy. Each year it was a struggle to get through the winter. Many did not. For the unlucky, mutton, butter, milk, skyr, dried fish, lichen, ran out. The summers were spent taking care of the dairy cows and sheep, in harvesting the hay, in cutting turf, in collecting lichen and seaweed, the winters, in fishing. The ocean fishing skills were largely irrelevant to survival on Lake Winnipeg, but the attitude was not.

What, at first, was subsistence fishing, providing enough for a full belly, soon turned into an opportunity to trade for necessary goods or even to be paid in cash. It didn’t take long for an Icelandic fishery to be established and among the Icelanders some families began to create fishing stations, build boats, set up commercial enterprises and become what was known as fishing families.

Among these were the Kristjansons. Sigurdur T. Kristjansson was born in Skagafjordur, in 1879. He came to Canada with his foster parents in 1885. He became a fisherman and lake station operator. Two of his sons, Hannes and Ted, in turn, became fishermen. Although, of Ted’s two sons, it is Robert who continues the tradition of fishing, it is Ken who has been writing reminiscences of fishing on Lake Winnipeg.

The lake was a dangerous place. It was a world mostly of men who worked hard, faced danger on a daily basis, lived in isolation for long periods of time. Those who worked on the lake created a culture, shared a life, and when a boy first entered this world, there were initiations. But, it’s Ken’s story, and I’ll let him tell it.

“In 1950 our family became the operators of the Booth Fisheries Whitefish Station on George Island, in the north basin of Lake Winnipeg. (Although the charts list it as ‘George’ Island, it was always called  “George’s Island”.) After high school was finished for the year, I was to board the M.S. Goldfield for the 200 mile trip to George’s to work as a junior shore-hand. My first time making the trip on my own.
“With a stop at Rabbit Point, it would normally take a day and a night to reach the island, so the trip was like a relaxing cruise. Captain Albertson and the crew of eight knew my family well and they weren’t above playing a little trick on me. Shortly after boarding, The Captain called me over and said very seriously that the “Key to the Keelson” was missing. As the crew was busy at their various tasks, would I help them find this important item? Being young and eager to please, I readily agreed.
“The Captain dead-panned that some member of the crew must have The Key. So off I went looking.  But the whole ship, save for me, was in on the game. They had played this stunt many times on ‘green horns’ before me and they had their acting parts down to a science.  One by one I dutifully searched out all the crew members, asking if they knew the whereabouts of this missing key. Each one shook their heads solemnly.
“Seeing my frustration and fearing I would give up after searching for so long, one of the crew said that the Engineer must have it. The problem was he was off watch and sleeping in his room. But on the ship, the Captain’s word was law and so I gingerly opened the door to the Engineer’s room. As quietly as possible, I explained my mission. Grumpily he arose from his bunk and with a stream of complaints about the frequent disappearance of the key, he searched his cabin while a 14 year old boy stood shaking at attention. Sadly no key could be found. In despair I made my way to the wheel house to report to the Captain my inability to find the elusive key. By now it was almost suppertime and the crew had gathered for the meal. The smiles on their faces should have tipped me off. As I approached, they all said in unison, “Gotcha!”
Ken  Kristjanson