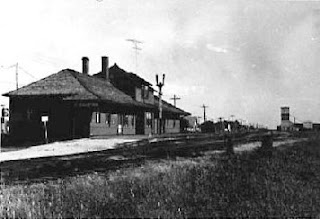 The Gimli train station of my childhood.
First, the Icelandic settlers came by flat boat, towed until a storm caused the captain to cut the line. The awkward flotilla was meant to land at Riverton where there’d be shelter from the storms on the lake but, instead, ended up on the swampy, sandy shore of Willow Point. I cannot imagine a more inhospitable place to land.
The sand bar that is Willow Point is open to the north wind that sweeps down from Hudson Bay. On the far side of this narrow strip is a lagoon. It provides a harbour but in high water the lake and the lagoon rise up from both sides. The sand bar itself is not tillable. The trees, when I was a child, were all scabby poplar, poor building wood and poor firewood. The marsh extended westward, only gradually rising, with even the land not underwater year around being boggy and soft. There was higher ground only a few miles north of Willow Point but with no boat to tow the barges, the settlers were trapped in an area exposed to wind from every side. The protection that would have been afforded by copses of spruce trees against both wind and drifting snow was close but not close enough.
They hurriedly built crude cabins, one for every stove, and spent the winter crammed together, waiting for spring.
The lake both, in open water and frozen over, was the first highway. The government then hired the settlers to cut a trail through the bush. Hard, unaccustomed work for men not used to cutting down trees, not used to using an axe, not used to thick bush.
Travel was slow, only possible in good weather. Getting goods to the market in Winnipeg was difficult, sporadic, often impossible. 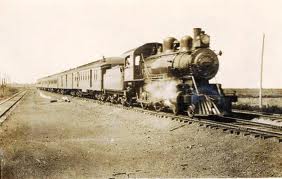 But the Icelandic settlers had seen trains in Scotland. They’d seen the power of the railway and, in Eastern Canada the first public railway started in 1836. In 1856 there’s a railway between Toronto and Montreal. In 1863, the first railway is opened in western Canada. In 1871, four years before the Icelandic settlers arrived at Willow Point, British Columbia joined confederation. A stipulation was that a railway would be built to join the Pacific with the rest of Canada. The Icelandic Mormons had walked from the East Coast to Salt Lake City. People traveled by horse back, on wagons pulled by horses and oxen, in canoes and on sailboats and lake steamships but none were efficient in moving people and goods over great distances.

In 1877, the Countess of Dufferin steam engine was brought to Winnipeg to help build the railway line. It is the first locomotive on the prairies. In 1878 the first train reaches Winnipeg. The railway owners saw settlers as their potential customers, receiving and sending goods, paying the railway in both directions. They know there are fortunes to be made.

Drive from Winnipeg to Stonewall on Hwy 7. Look carefully at the land. High, not swampy, good to build on. Pay attention to the railway tracks. The railway reached Stonewall in 1881. That’s only six years after the Icelanders first landing on their windswept sandbar, only five years after they moved north to Gimli. Seventeen years later, in 1898, the railway reached Teulon. As you drive north, keep an eye on the land, on this high ridge created by Lake Agassiz. In 1907 the railway reached Kamarno. Nowadays, Kamarno is a handful of houses, a church, graveyard and a sculpture of a mosquito. But, in 1907, it was the end of the line, a place where goods could be picked up, where cordwood could be loaded for markets in Winnipeg. In 1910 the railway reached Arborg.
Railways are all about markets. No market, no railway. Not a big enough market, no railway. They live or die on passengers and freight. No one builds a railway for the fun of it or because it might be convenient for someone. Railways are built for profit. They cost enormous amounts to build and run. Land, grading, steel tracks, railway ties, track laying. The railways in Canada wanted settlers, settlers who would take land in the area of the railway line.
On the other side of the equation, settlers wanted railway lines. There was no point in producing goods: fish, grain, vegetables, cordwood, lumber, milk, cream, if it could not be shipped to a market that would buy it. To be bypassed was to be beggared.
In 1883 the railway reached Selkirk. It wasn’t until 1903 that it reached Winnipeg Beach. That was five years after the railway reached Teulon. For three years, Winnipeg Beach was the end of the line. All goods from New Iceland needed to be taken to Winnipeg Beach so they could be shipped by rail.
In my childhood, Winnipeg Beach was no longer the end of the line but the head start that it had got in 1903 had served it well. It had become an easily accessible summer resort. It had a boardwalk with rides and games. It had the Moonlight Special that brought people down to the large dance palace at the north end of the boardwalk. What it had lost was the business generated by people having to go there to ship produce to Winnipeg.
The railway reached Gimli in 1906. The trip to the station was shorter, the time it took for a horse and wagon loaded with goods was shorter. Gimli, now that it was just a train ride from the city, became a summer resort. The train didn’t just provide the local Icelanders an opportunity to ship goods but also the Ukrainian settlers who also supplied cordwood. It also meant a market created by the people who built cottages, a local market for fresh farm goods, vegetables and fruit, eggs, chickens, milk, cream and, from the fishermen, fresh fish. With no middleman. The summer campers who came on the train also provided work for tradespeople, for cooks and babysitters, for all those things that better off city folk in a summer cottage needed and wanted.
Cordwood, though was the main cash producer. Winnipeg consumed vast amounts of wood for wood stoves and wood furnaces. The train was the cheapest and most efficient way to get it there.
For a time the C.P.R. considered extending the Winnipeg Beach line to Arborg. However, if that was done, the railway would not have been extended to Gimli. Instead it would have run along the gravel ridge that is five miles west of Gimli. Michael Ewanchuk says that this news sent the Icelandic businessmen in Gimli into a panic. That’s not surprising. In recent years, we’ve seen how building a highway west of the small towns of New Iceland has meant that businesses shut down. Transportation is critical.
There were two impediments two building the line from Winnipeg to Gimli. One was Willow Creek. The area on both sides of the creek was and is still marshy. Putting in a rail bed would be expensive. The other impediment was that there didn’t seem to be enough freight to support the line.
The Icelanders appealed to the Premier of Manitoba, R. P. Roblin and when that didn’t work, they approached the Federal Government. That got them an approval for the line.
If the rail line had gone from Winnipeg Beach to Arborg, there was a good chance that a spur line would have been built to Gimli, although building it might have been expensive because of the marshy ground.
Without the railway, Gimli would not have prospered. It would not have become a summer resort. It would not have become a transport hub. It wouldn’t have got the WWII airport because a rail connection was essential for both materials and personnel. The airport provided both jobs and business. When the airport closed, there was, temporarily, an industrial park on the airport property.
Today, there is a distillery just north west of Gimli. The daily passenger trains have long gone. Long rows of box cars are a thing of the past but the distillery still receives its supplies of materials by train. 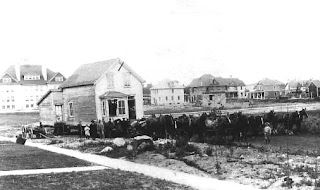 Team of horses moving house. You could move an entire town that way.
Barry Broadfoot, in his book, The Pioneer Years, includes a reminiscence about what happened to two towns that the railway bypassed. They were called Mountain City and Nelson. They were going concerns. Mountain City had stores, businesses and two hotels. There were general stores and a hardware store, a grist mill, a sawmill, blacksmith, harness shop, schoolhouse, homes and, he says, “even a Presbyterian church.” After the railway bypassed Mountain City, people put the buildings on skids and hauled them to the railway line.
No wonder the Gimli businessmen panicked. If the railway had gone from Winnipeg Beach to Arborg, it would have been necessary to put Gimli buildings on skids and move the town to a new site. Except, of course, Gimli was about fishing so the fishermen couldn’t move west. The summer cottagers wouldn’t have arrived. Who is going to build cottages at Gimli if it means getting off the train and having to take a long buggy ride to the beach?
It is hard to imagine what would have become of Gimli without the railway. Eventually, good roads would have been built but they might have been a long time coming.