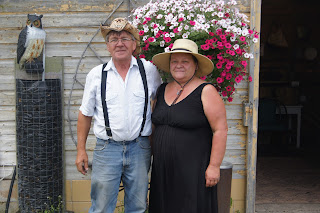 Darlene and Ben Solmundson at work.
My dad took me to Solmundson’s a couple of times. There were greenhouses and flowers, lots of flowers and both he and I were gardeners. Not poke a finger in the geranium pot gardeners, tens, hundreds and sometimes thousands of flowers, gardeners. This rough, tough commercial fisherman caught the bug from my Irish grandmother who could grow any plant any place. I swear she could grow roses on a bed of rock.
My father grew vegetables and flowers and berries at his fish camp. He cut the grass and turned over the soil and everything grew like a jungle. The black bears liked to share in the strawberries. However, they and the moose weren’t interested in the pansies. 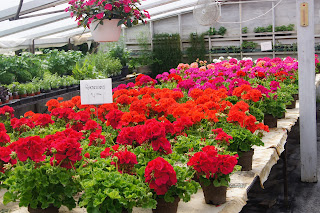 Good plants, strong plants, strong stems, vigorous leaves, radiant flowers, that was what my father was after when he went shopping. My father prowled the instant nurseries along McPhillip’s but he seldom bought anything. The stems were spindly, the leaves pale. The people attending the fenced in plants weren’t gardeners; they were temporary clerks hired to put water on the plants and take payments at the till.
I’m not sure how my father found Solmundson’s Perennial Gardens. I’m not sure how anyone finds Solmundson’s Perennial Gardens. If you are heading down Hwy 8 from Winnipeg to Gimli, or from Gimli to Winnipeg, you turn West at a sign that says Kamarno. You don’t drive to Kamarno. You just head in that direction. There is a sign just before the driveway. You can also get there from  highways 7 and 9. Just follow the Kamarno Road signs.
It’s been awhile since my father gardened. Some years back, he went into the local nursing home, abandoning his beloved tiger lilies and giant delphiniums, his beds of onions and potatoes, his raspberry canes. He lived at the nursing home, looking out the windows at the green world. He eventually died there in a room with a narrow bed, a dresser, a chair. If he had died when he was young, it should have been in the midst of a violent storm on Lake Winnipeg, battling the elements, screaming defiance. If he had died before he had to go into a nursing home, it should have been in his garden, surrounded by his flowers. 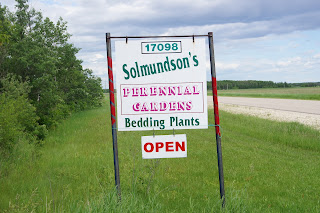 I mentioned to my cousin Dilla that I wanted some plants with which to make a roof garden that I could look at when I was writing. She said, “We’ll go to Solmundson’s.”  I didn’t remember that I’d been there until we pulled into nursery  driveway, then it came back to me. My father taking me there and my being fascinated by a hanging snap dragon that I’d never seen before. I liked it so much that when I got back to BC, I looked everywhere for it but with no luck. This time, I looked for it at and, sure enough, they had some so I had to buy a few to put into my roof top pots.
Although Solmundson’s Perennial Gardens are nowhere near a town, people must know where they are. Darlene Solmundson tells me that she and Ben started the greenhouse business eighteen years ago and they’re still in business. She’d worked at a greenhouse down the road for a number or years, then the owner’s wife died and he quit. She mentioned to Ben there might be an opportunity to start their own business and her former employer let them use his place the first year to grow plants. They’d grow them there, then bring them back to their place to sell.
The kids were small and a home based business suited the family just fine.
Their farm originally belonged to Darlene’s mother and father, Victor and Anne Srutwa. Ben is from Gimli and is the son of Joe Solmundson.
They started out with no greenhouses and now they have eight buildings. They start in February seeding, they heat up the buildings one at a time as each is needed. There is more to the greenhouse business than the summer season. There is a steady rhythm to Ben and Darlene’s lives. In August, as the current sales year starts to wind down, they will already be ordering cuttings for the following year.
They open on Mother’s Day and stay open until the Thanksgiving weekend. They can extend their year like that because they carry shrubs and perennials.
Their best sellers are stuffers. I can believe that because that’s what I was buying the three times I was there recently. With stuffers you can create instant gardens in hanging baskets and flower stands.
They have a large demand for vegetable plants. It’s only June 21 and they are sold out of tomato plants. Part of that was due to the odd weather we’ve been having. There’d been warm weather, people bought tomato plants for early planting, then it froze and they had to buy more tomato plants. There’s a silver lining on every cloud.  They carry transplants for things like squash and pumpkins. These they grow from seed. I picked up onions and celery because I like mixing vegetables and flowers in both pots and beds. 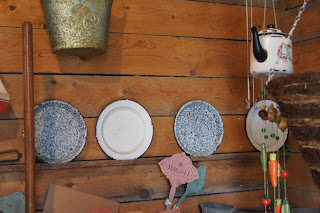 I asked Darlene if she carried any exotics but she said no, they were not good sellers. People preferred the geraniums and the petunias. I can see why. The colours are beautiful.  On my first trip and my second trip, I bought geraniums. But then, today, just as I was leaving, my friend, Nina Colwill, who had come with me, came out of a green house and said, look at this. It was a plant I didn’t recognize. It was a  New Guinea impatiens. That’s the trouble with visiting green houses. I go to buy a few geraniums and end up buying something like a New Guinea impatiens. The colours were so brilliant that I just had to have one. The problem is that Darlene says it needs to be in the shade and rooftops aren’t big on shade. Maybe I can tuck it into a spot where it gets shade from the Manitoba Maple that hangs over the roof. It’ll provide a spot of intense red among the green leaves.
I looked at my plants when I got them home. Strong stems, green leaves, carefully pruned, watered, fertilized, taken care of by people who care about plants. That’s good because people who care about plants like to buy from people who care about plants. 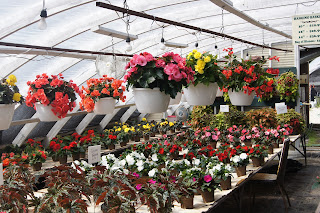 I know, I’m of Viking stock. I should be in a Viking long boat raiding the shores of Lake Winnipeg, pillaging, but I am half Irish so maybe I could just pillage gardens. My grandmother did that. Pillaged gardens. She always carried little bags with some damp soil in them in her purse. When she saw a plant she envied, she snipped off a leaf and tucked it into one of the bags. She did that at Winnipeg’s City Park quite often. When she got the slip home, she nurtured it, grew it, enjoyed it.
When we were leaving, Nina asked Darlene if she had any Virginia Creeper for sale. It was sold out but there was some growing over a shed. Darlene got her clippers out, cut a long piece, gave it to Nina and then showed her where to cut it (close to the budding nodes) and how to plant it. Now, that’s service.