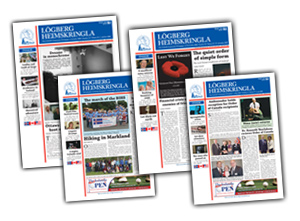 For two years, I was the editor of the bi-weekly newspaper called Lögberg-Heimskringla. It’s the oldest continually published ethnic paper in Canada. Once published in Icelandic, it is now published in English.
The paper represents in a very clear way, the progress of integration and adaptation. It was begun out of a need for Icelandic immigrants to have Canadian laws, customs explained to them in Icelandic. It provided guidance in everything in a country where everything was unfamiliar. It provided news of Iceland, Europe and beyond. It gave people who did not speak or read English a way of staying connected to their own immigrant community.
It had, in its early days, those specific functions ethnic immigrant papers have. That is, it helped people adapt. It provided advice on everything from how to grow potatoes to who to vote for. Gradually, though, the immigrant community in the area called New Iceland and in Winnipeg, began to dissipate. Members moved to other parts of the province, to other parts of the country, to the United States. More people learned to function in English. A new generation being born in Canada, even if bilingual, had English as its primary language.
The two papers, Lögberg (Lutheran and conservative) and Heimskingla (Unitarian and liberal) had followed a tradition established in Iceland where papers were  highly partisan and often reflected the extreme views of the person who started them or who edited them. The papers attacked each other. For some the conflict was entertaining. For others, it was divisive and hurtful and they withdrew their support.
The readership, as people moved away, learned English, integrated, married people of non-Icelandic background, fell. After a time, the community could not afford two papers. There weren’t enough advertisers or subscribers. Peace was established and the papers were joined.
Two of the normal forces in immigrant communities were at work. There was less need for information in Icelandic and growing integration (doing business, interacting socially) meant greater identification with the English speaking community.
The paper, to its credit, adapted. Initially, both papers and then the combined paper, were in Icelandic. Gradually, recognition that many people of Icelandic descent born in Canada were not learning Icelandic but still wanted a paper meant that the paper started to publish some material in English.
Today the paper is published in English and with a few scattered Icelandic words and an occasional Icelandic lesson.
The paper has given up its ethnic immigrant role. No one needs to read in Icelandic how to plant onions or apply for a job. Or how to vote. Now, the paper‘s role is to celebrate the past, to help keep the wide spread communities linked, and recognize the Icelandic community‘s contribution to both Canada and the United States. It also works to keep the link between Iceland and the community alive and to provide news in English about Iceland.
The paper still plays an important role maintaining our community‘s identity. Canada is a polyglot of national groups, of languages, of cultures. We have chosen to be a multi-cultural society. That means that within the Canadian context, each group that wants to maintain its links to its pre-immigrant past needs to actively support its history, its culture, and its language. To remain cohesive and connected it needs an umbrella organization like the Icelandic National League and a publication like Lögberg-Heimskringla.
You cannot embrace your heritage unless you know about it and, to know about it, you need both organizations (clubs, the INL) and a newspaper or news magazine.
(This series will be based on my presentation at the INL convention in Brandon, Manitoba)