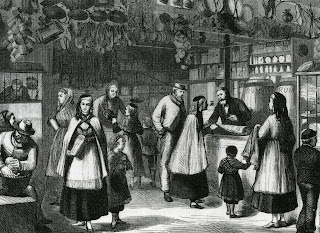 I don’t think most people, including me, have had any idea of what it was like to have the Danish king come to Iceland for the first time in history. It’s easy to say, Christian IX went to Iceland but kings don’t just go somewhere. They are kings. There must be some pomp and ceremony.
Reykjavik, in 1874 was still a small town. There were about two thousand people, I believe. The important people were mostly Danish officials. However, there were some Icelanders with social stature. The country was desperately poor. Yet, they wanted to be good hosts, to behave in a way of which they could be proud.
In this third episode, the king’s ship has arrived, the king has come ashore, and, now, the action shifted to the Governor’s house. Here were Icelanders dressed their best, ready to associate with royalty. Taylor captures the scene in Reykjavik. The women in their picturesque dresses, the men in their dark clothes, the street full of horses for everyone had come to Reykjavik by horse. To travel any distance required not one horse but a number of horses. There will have been horses everywhere.
Taylor and his friends go visiting. He describes these visits and also comments on the Icelanders and the way they deport themselves. He compliments Reykjavik, giving it a good character. It’s been spruced up for this regal visit.
So, here is Taylor. Read his descriptions and imagine that you are there, standing on the street, going visiting.
“The Bishop, Committee, and other officials waited at the bottom of the garden, until summoned by a chamberlain in a red coat, when they too disappeared behind the Governor’s door. I now turned to inspect the crowd, and found to my surprise that the women were much more picturesque figures than the men. Many of them wore square bodices of some dark color, a gown with many pleats about the waist, with bright blue or red aprons. Nearly all had a flat cap–
or, rather, a circular piece of black cloth—on the top of the head, with a long black tassel on one side, hanging from a silver or gilded cylindrical ring, an inch or two in length. These rings are precisely like those which the women of Cairo wear over the nose, to hold the veil in its place. Some of the girls had their hair braided, but many wore it loose; and I saw one maiden whose magnificent pale yellow mane suggested a descent from Brynhilde.
“The men showed only two colors—the brown of their wadmal coats and trowsers and the ruddy tan of their faces. Few of them are handsome, and their faces are grave and undemonstrative; but they inspire confidence by the simple strength expressed in the steady blue eye and the firm set of the lips. There were plenty of tawny or piebald ponies with manes like lions, in the streets. I suppose many healths must have been drunk during the day, for the old Norse habit still flourishes here; but I saw only one man who was somewhat unsteady on his legs, while he managed to keep his face sober.
“In the afternoon, under the guidance of Herr Magnusson, we made a number of visits. Bishop Pjeturson first received us, and with a gentle, refined courtesy becoming his station. Conversation was carried on in French with himself, in English with his son, and in Danish with his wife. A bottle of champagne was produced, and the kind hosts touched glasses with us, in welcome to Iceland. We explained our object in coming, told of the interest felt by our countrymen in this rare historical anniversary, and claimed kinship of blood on the score of the
early relationship of Goth and Saxon, and our own later infusion of the Norman element. There is no Icelander—no Scandinavian, indeed—but knows and is proud of the race from which he is descended.
“Our next call was on Herr Thorberg, Governor of the Southern Syssel (District) of Iceland. Madame Thorberg spoke English with fluency and elegance,—in fact, we have discovered that the Rejkiavik ladies generally speak English and the gentlemen French. Then we visited, in turn, the Professor of Theology, the Dean, and the Rector of the University. The latter gentleman had heard of the collection of volumes for Iceland made in America—mainly through the efforts of Prof. Willard Fiske of Cornell University,—but stated that, with the exception of a case of
publications of the Smithsonian Institute, nothing of it had yet arrived. The duplicate volumes, when they come, are to be sent to Akureyri, the northern capital.
“It was stretching the hospitality of the gentlemen almost too far to visit them toward the close of a day so important and exciting for them; but nothing could exceed the genial warmth and kindliness of our reception. I notice something of the same quiet dignity, which is a characteristic of the upper classes, also among the common people. It must be a chief feature of the Gothic blood, for it exists in the same form in Spain and some provinces of Sweden. Such men
will take your pay and serve you faithfully, but you must never forget to treat them as equals. The impression which the Icelanders have made upon me, thus far, is unexpectedly agreeable. I am convinced that I should find the ways of the people easy to adopt, and that, once adopting (or at least respecting) them, I should encounter none but friends all over the island.
“As for Rejkiavik, it is far from being the dark, dirty, malodorous town which certain English and German travellers describe. The streets are broad and clean, the houses exceedingly cosy and pleasant, the turf of the greenest, the circle of the fiord and mountains truly grand, and only the absence of any tree suggests its high latitude.”