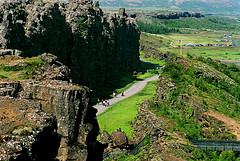 Samuel Kneeland has much to say about Iceland and his experiences in and around Reykjavik but he is in Iceland to observe and participate in the action so he and his party head for Thingvalla. He says, “Late in the afternoon we came in sight of the large lake of Thingvalla,–a magnificent sheet of very deep water, at least fifteen miles long and six wide…We knew by this that we were approaching the valley of Thingvalla, into which we must descend by the great fissure of the Almannagja, the grandest and most awful scenery in Iceland, and probably unsurpassed in beauty.”
The ride is hard. The day is long. He says that they were tired. “Chilled at the start, stewed under our Mackintoshes when the sun came out, with feet wet form the splashes of the icy-cold streams, hungry and thirsty, we were very glad to know that the of our day’s work was nigh.” 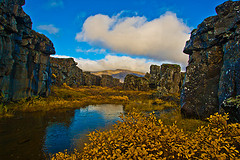 “This verdant plain, once the place of assembly of the “Thing,” or “national Council,” but, for three fourths of a century, almost deserted, was now dotted with white tents and flags, and with crowds of men and horses, indicating the expected approach of  the royal party, who were some hours behind us. It was a very lively and unexpected scene, though somewhat marred by a commencing drizzle, which added another discomfort to our cold and weary bodies. We descended by a narrow pathway, a natural shelf on the side of the shattered cliff, so steep that most of the party dismounted, to prevent being thrown by the slipping of their saddles on to the necks of the horses. Dashing through the shallow river, and up a muddy hill and narrow lane, we arrived at the forlorn-looking parsonage and church, by the side of which—permission having been asked and granted in Latin,–we pitched our tent, after the usual vexatious delays attending the unloading of the ponies.” 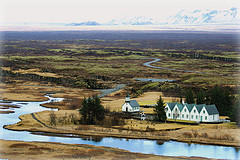 “All the available surrounding green was covered with the king’s tents, and liveried servants were hurrying about, getting things ready for his arrival. We were entirely independent, having our own servants and guides, and everything necessary for our comfort and food. Our tent was pitched near a pool of icy cold water…the cleft of a neighboring rock served admirably for a fireplace; and the neighboring parsonage fire was permitted, for the first night of our Icelandic picnic, to warm the water for our tea and coffee.”
The next morning, Samuel and his companions head for the Geysers because this is the destination of the king. They stay there three days, after which they return to Thingvalla for the formal festivities.  When they return, he says, “Almost every available space was crowded with tents, large and small; flags of Denmark, Norway, Sweden, Germany, France, England, and America were flying around the great pavilion; while the flag of free Iceland—a white falcon on a blue ground, the banner of the Vikings—floated from the Mount of Laws. Crowds of people were moving to and fro, and the many camp-fires, streamers, and songs indicated an important occasion.”

When we celebrate Iceland’s independence on June 17, think on that, on Thingvalla, on the plain, crowded with tents, with flags, with Iceland’s white falcon, crowds of people gathered for this great event. Think on that, all the people who have come on horseback across the mountain paths of Iceland, long lines of horses, coming from all directions through the mountains passes, descending into Thingvalla. What a sight it must have been. All the tents, the banners, the flags, the people, gathered here waiting for the arrival of Christian IX and his party to join them in this historic place.
The next time you go to Iceland and visit Thingvalla stand there, at the top of the cliffs and imagine the scene that Samuel Kneeland saw that day. A scene that only came about because of the determination of Jon Sigurdsson and his followers.