With the generous help of my friend, Jim Anderson, antique bookseller in Winnipeg, Manitoba, I have been able to copy a rare passenger line brochure intended for immigrants. It’s later than the time period when Icelanders were leaving Iceland to escape economic and social conditions. Still, it provides an interesting insight into part of the immigration process. These passengers aren’t being shut in the bowels of the ship with a herd of horses.

You had to get to Liverpool, of course, and that could be quite a journey. In the summer, you had a choice of destination: Quebec City or Montreal. In winter, you could land at Halifax or Portland. The White Star-Dominion Line provided this small brochure to prepare you for Canada. 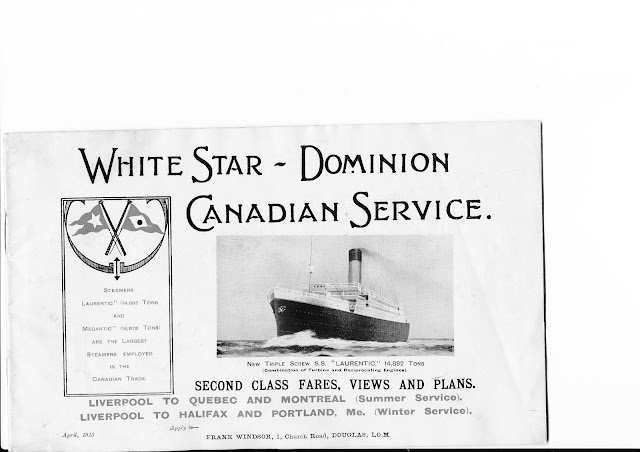 First class was, of course, very exclusive, and expensive. If you’ve seen the movie, The Titanic, you’ll have some idea of the luxury that came with a first class ticket. Then there was second class, still, not bad at all, then there was steerage. None of my people in my Icelandic family came first or second class. They were down there with the horses, or crammed there with other immigrants, as many as could be jammed into one spaces. The trick was to survive the fetid atmosphere, the food, the seasickness. Remember that most of these people had never been to sea. Often, nearly everyone was seasick. First person accounts quite frequently say things like, “I was the only person who ate breakfast today.”

I believe that my Irish grandmother came second class.

Seasickness affected everyone, first, second class, steerage, but the first and second class passengers got to be seasick in much more comfort. 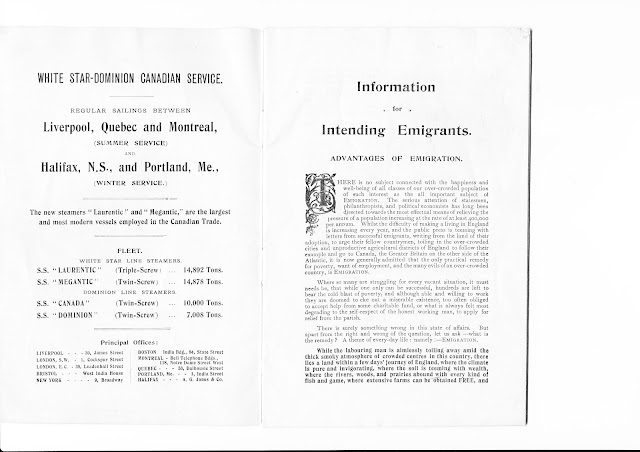 Here is the front page. I’ve made it as large as I can X-large. It doesn’t seem very readable. I’ll see if the print can be darkened and made larger.

This brochure is, I believe from 1924. WWI has been over for six years. A lot of the Englishmen who had come to the prairies from around 1895 to 1914 (like my Irish grandfather) joined the army and were sent to France to die in the trenches. My grandfather survived, but just barely, and he returned to Winnipeg, Manitoba. A lot of the English settlers had no farming experience. They came from the cities and had held city jobs: cabinet makers, clerks, storekeepers, cobblers, butchers, factory workers. When WWI started it was an opportunity and an honorable reason to return to the UK. They wouldn’t be returning as failures.

A lot of the men who volunteered to fight for England in WWI didn’t return. The casualties were horrendous. United Kingdom deaths are estimated at nearly a million with Canadian deaths at 67,000. In the meantime Canadian cities had grown. Winnipeg had gone from 42,000 in 1901 to 150,000 in 1913 to 194,350 in 1924. Immigrants were coming again.

Immigration may have been desperate bids for political freedom, to escape dreadful economic conditions, but to the steamship lines, the railways, the immigration agents, it was just business.