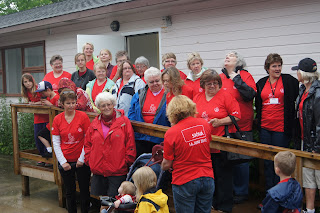 In a slight drizzle, slight because for the last few days Gimli has been being drenched by thunderstorms, an enthusiastic group gathered at the Gimli park for the beginning of the annual Kvennahlaup.
Started in Iceland twenty-three years ago, the Women’s Walk has spread internationally. Today, there will be walks in cities and towns across Canada and in countries around the world.
A fee is charged for participants, somewhere around $20.00 to $25.00. In return the participants get a t-shirt from Iceland, a medal, snacks and refreshments. Any profit left is donated to a charity.
While the donation to charity is always a good outcome, it is obvious that the walk is about much more than that. 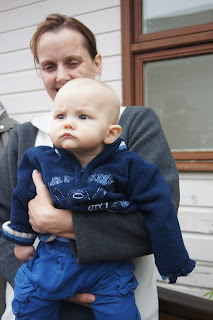 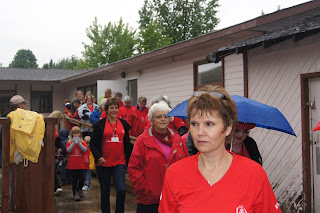 Off into the rain 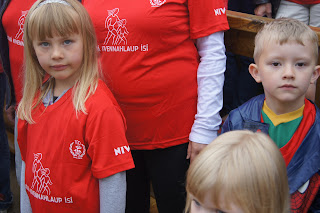 Men are allowed to help with various tasks, but the walk is for women walking in solidarity with one another. In a society where discrimination and violence against women by men is still consistent and prevalent, the walk is a morale booster, a creator of group identity.
In Egypt, women who paraded in the streets were physically attacked recently, a woman who drove a car (imagine that, she drove a car in Saudi Arabia, how evil is that?), was imprisoned, female fetuses in places like China and India, are routinely aborted. Those wicked foreigners! Except in Canada female fetuses are also being aborted. Except it is in Canada where women went missing and the police weren’t interested until they were virtually forced to search the Pickton farm. It’s in Canadian papers that the reports of women being murdered by their husbands seem to never stop. The record of the RCMP with regard to the dreadful way they have treated female officers is so awful that one would think it was a report on some place in the Middle East. The military harbours Russell Williams, makes him a colonel, and when he is finally caught after having murdered two women, they burn his uniform but what do they do when women in the armed forces lodge a complaint that they have been sexually assaulted?
A friend of mine won’t walk alone because, in the past, she’s had some bad experiences with aggressive men. We’ve moved ahead of some middle east countries where a woman can be condemned to death because she’s been raped, we’ve even started to grasp the idea that the victim shouldn’t be blamed, but we haven’t made violence against women, socially unacceptable, socially condemned.
Kvennhalaup is great. It’s just a shame that a woman, by herself, can’t walk the same route in all these locations without being concerned for her safety. The turnout was good in spite of the rain but it would have been better if every woman in town had been there. My mother died recently at 90. She wasn’t able to be there in person but I had a feeling as I took photos, that she was there in spirit. And so were many women of her generation. So maybe the crowd was bigger than shows on film.