Bru church
The most memorable moments are often spontaneous, unforeseen, unexpected, flashes in time when something happens that will stay with you for a lifetime.
Today, that happened at the Frelsis (Liberty) Lutheran Church of Grund.
The day started inauspiciously with overnight rain, large puddles on the parking lot of the Victoria Inn in Brandon, Manitoba. The sky was heavy with grey clouds and no more than a small blue opening with the sun shining through.
We crowded onto the bus that the INL Brandon chapter had arranged to take us on a tour of the Icelandic settlement areas. There was an overflow crowd so cars were also filling up. They would follow us as we wove our way through a labyrinth of country roads.
We first stopped at the Skalholt graveyard. A small area of grass enclosed with metal poles and chain link fencing, it sits alongside heavy scrub bush, thin, ragged poplar trees just starting to leaf out, a few scruffy firs. Just before the graveyard, the land has been cleared and its rolling surface is ready for planting. The bus driver tells me that this is potato country, that just one area supplies all the potatoes for McDonald’s outlets in Chicago. The early Icelandic settlers eventually left here, unable to prosper or even survive by farming this sandy soil for grain.
Some of the graves are lined with what looks like zinc. The graveyard itself is tidy and well taken care of. Some graves are from a few years after the first settlers arrived. The crowd shuffles about, signing a guest book, taking pictures, moving from one grave  to the other, forming and reforming knots of people taking pictures of each other. A recent grave has a broken pot lying on its size. It is filled with artificial flowers.
We then stop at Bru. Bru means bridge but there is no bridge in sight. There was at the original site. Bru was a Lutheran church that was de-sanctified. It was moved ten miles to the farm of Albert and Annette Wytinck. The church is now a café and the Wytinck’s provide bed and breakfast. The church has been kept intact, stained glass windows, chancel, interior decorations but the pews are gone, replaced by picnic style tables and chairs running the length of the church.
We are so many that when we are seated everywhere a table and chairs can be jammed, I’m on the stage at the front, looking down on the three crowded rows of tables laden with food and I think of loaves and fishes and Christ’s feeding of the multitude. Here, though, instead of loaves and fishes, it is egg, salmon, beef sandwiches and bowls of lettuce with dressing. On a sideboard are platters of tarts, cake and slices.
Albert Wytinck gives a talk on the history of the church, the creation of the carvings in it. After his talk, he entertains the crowd with country and western songs. The crowd is appreciative and he has no trouble selling his CDs.
We go from Bru to Grund. Built in 1889, Grund is the oldest standing Lutheran church in Canada. Its full name is the Frelsis (Liberty) Lutheran Church. We are greeted with the ringing of the copper bell. The sound, we are told, can be heard five miles away. The church, once the centre of the community’s social life,  is only used in the summer. 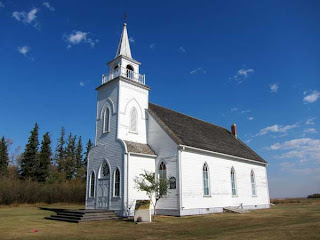 Grund church
It’s a fine church with its high windows and its pews polished with more than a hundred years of use. Vera Bjornson, one of the local people who are there to meet us, is an organist. She is asked to play something for us and, appropriately, begins to play a hymn. Spontaneously, people gather and begin to sing. You can tell that many on the tour are Lutheran church goers. Soon, the hymnals are out and people are shouting out, No. 482, when that is finished, no. 535. Hymn follows hymn as people request their favorite hymns.
I’m busy chatting to a member of the Victoria club who has introduced herself but I’m drawn like a magnet to the organ, the spontaneous choir, the first words of “Amazing Grace”.  It is this hymn that I have often turned to in time of distress and death. It is this hymn that often has comforted me.
The crowd around the organ grows. Many of us are living earlier times, Sunday school, Luther League, church services in our home towns. Afterwards, talking to people, I realize that they, like me, because of the age and style of the Grund church, are reliving the wooden churches of our childhood and youth, churches in Gimli, Hnausa, Riverton, Manitoba that are all gone. 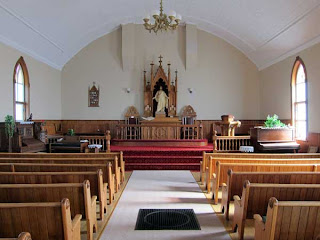 Interior Grund church
Ellen Rawlings (Johnson) has been at the door of the church in her Icelandic dress. Now, she stands at the pew and relates the history of the Skalholt church,  emphasizing that it was so important to the settlers that it was built with volunteer labour while the settlers still lived in log cabins. In the midst of the heavy labour of clearing the land, sowing crops, building a life from scratch, they built God’s house.
We linger longer than we should. The historic organ, the hymns, the church. Something unexpected, something spontaneous, something precious has happened and we want to hold onto it.
Our arrival has been rung and, now as we are leaving, our leaving is rung. The sound of the bell is rich, full of lasting echoes. It spreads over us as we board the bus, spreads out over the land where our ancestors cleared the rolling hills and planted the first crops, spreads out over the simple graves in lonely graveyards among those rolling hills. I like to think, the sound, as it spreads outward, says to those people who came so far, from Iceland to Kinmount, Ontario, to New Iceland in Manitoba, to the Argyle district and lived and died there, you are not forgotten.