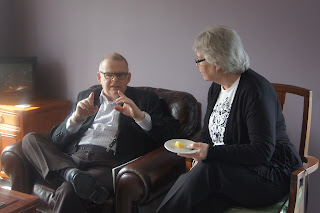 Photos by WDV
Atli, the Icelandic Consul General, explaining the Icelandic economy to his second cousin, Myrna MacFadden who is from Port Alberni.
I’m not the world’s worst housekeeper but I don’t put a lot of effort into dusting. I’m too busy writing, chopping down gorse and broom, hacking away at English ivy, too busy doing research to spend much time on checking for dust on the trim in the living room. The carpets get an occasional vacuum. Most of the time, I live in the kitchen, office, bedroom and wander occasionally into the living room and dining room. I’m always a bit surprised to discover that I have a guest bathroom. You get used to what you are used to.
So, when I was on Salt Spring Island cutting gorse for JO and said to her, I’m going to have a reception for Atli Asmundsson, the Icelandic consul general, and his wife Þruður, she blanched, and said something like, “Oh, my God.” Or Mein Gott. Or Ekki Gott.I’m not sure since the battery in my hearing aide had died.
“What?” I asked.
“Your house!” she said. From the look on her face, it was obvious that she was remembering cobwebs so large they held the bodies of small birds, dust bunnies as big as tumbleweed, wine stains on carpets, my mountainous piles of papers and books threatening always to topple over and bury unwary guests.
According to her, if there was dust along the window sills, cobwebs in the corners, women guests would all notice it. I pshawed, but then I remembered what my mother told me. She got married when she was sixteen. Moved to Gimli, Manitoba. Joined a couple of the women’s groups. They rotated meetings, going from one member’s house to another. When it came to her hosting her first meeting, she was still not quite ready when a half  hour before the appointed time, one of the matriarchs of the town appeared, noticed that my mother was still in the dress she wore while cleaning  house and said, “Aren’t you ready yet?”
The matriarch was wearing white gloves. She proceeded to run her index finger along various surfaces to see if they had been properly dusted. 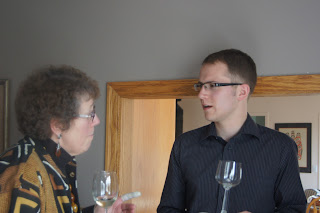 Matthew Fitzsimmons and Kladia Robertsdottir. Matthew is
this year’s recipient of the Beck Trust Student Research Travel
Award to Iceland. He has been learning Icelandic on his own but will be going to Iceland for a full academic year to learn the language. Kladia, originally from Germany, moved to Iceland, lived there many years, worked as a travel guide before moving to Victoria. Just got back from attending a family confirmation in Iceland.
Remembering this, I quit pshawing and went to work scrubbing the deck and the balcony. There is a very large fir tree at the corner of the deck. A fir tree that litters my deck with needles, pollen, and bits of branches. The pollen provides feed stock for black mold that requires a long handled deck brush, a B-mop, hot water, soap and a lot of scrubbing. In the shade of the tree, green mold multiplies.
The hot tub, I did not want a hot tub, it came with the house, I long ago gave up adolescent fantasies of partying in a hot tub with hot babes in G-string bikinis, was a disaster.  I’d just about forgotten that there was a hot tub on the back deck. I seldom go there. Small ferns grew out of some of the cracks of the frame. I never thought I’d spend time weeding a hot tub.
There is a brick ramp that leads into my garage. The bricks are beautiful. However, the spaces between the bricks collect pollen from the tree, dust from the road, and turn it into soil that nurtures weeds. These weeds are about the same size as a birch forest in Iceland.
I took a pointed trowel and went along every crack, vertically and horizontally, until the roots of every weed lay shrivelling in the sun.
I swept my side of the road. That’s the kind of neighbourhood this is. No sidewalks. But every one sweeps their side of the road. This is hard for me to adjust to. I grew up in Gimli. My father had boats, nets, anchors, buoy poles stored in the yard. Fishing nets hanging from crossbars. Oiled corks strung like sausage rings on more crossbars. When my mother suggested my father mow the lawn, he brought home two goats.
JO said things like your carpets need cleaning. She even provided a machine that would do the job. I’d never seen one before. It was purple. She cleaned the hallway carpet, then said, “Come and look at this. I’ve left a small spot uncleaned so you can see the difference.” It was true. The carpet had darkened with age and the tracked-in fir dust.  Washed, it was a surprisingly light grey. 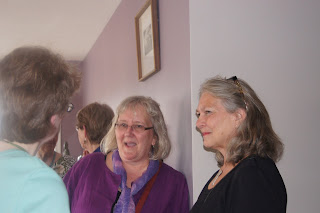 Power women at the party.
Dr. Ellen Guttormson is a 1976 graduate of the Western College of Veterinary Medicine and is a long standing member of the American Association of Feline Practitioners.
Dr. Margo L. Matwychuk, Cultural and Social Anthropologist,
Janis O. Magnusson, agricultural economist
Apparently, there is something called “detail cleaning.” Or so JO says. I’m not sure. She may be putting me on. But I went to work on the en-suite bathroom just in case someone needed to use it. Surprising where dust gathers.  At the top of the shower. How does it get there? Dust, like life, is a mystery.
Every time I went to say “Nobody will notice” to JO’s list of what needed to be done, I remembered the matriarch with the white gloves.
“What are your plans for food?.”
“Costco.”
There is, lurking in the dark corners of every man’s soul, a messy adolescent, a belief in serendipity. There is, it would seem, in the dark corners of every woman’s soul, a need to organize the mess, to have a place for everything and everything in its place. I keep everything on the top of my desk because if I file it, I forget about it and rediscover it, with great surprise, years later.
“Wine, sparkling apple juice, Pellegrino, coffee, need wine glasses and cups,”she said.
I went through my cupboards. Thirteen wine glasses. Six cups and saucers and another four china cups from my grandmother’s china set.
I found a rental company on the internet. Turns out it is just around the corner on Quadra Street. It’s the most amazing place. You can rent anything. Leprechaun hats, big shamrocks. I nearly rented a Viking costume. One that had a helmet with horns.
I made a scouting trip to Costco. I usually try to avoid Costco. Nothing against it, just that my father liked to buy big. My mother lived in terror of his shopping trips to Winnipeg. He came home once all excited because there was an entire semi-trailer of paint for sale at the salvage company where he liked to shop. He was supposed to buy four gallons of white paint so he could paint the house.
When I think Costco, I think of my father. When I go through the door of Costco, he possesses my mind. The words “Buy lots” overwhelm my mind. I start to look for the largest dolly available even though I’m just coming for yogurt, coffee, a fruit tray, a veggie tray, some cheese.
When I resist the urge to buy big and am checking out, I feel embarrassed. In front of me is a woman with two carts, pushing one, pulling the other, piled high, thousands of dollars of everything. Behind me is a guy with a cart. He has gallon jugs of mayonnaise, five gallon containers of olive oil, cases of mangoes, enough bread for one thousand sandwiches, peanut butter by the gallon. When I get to the checkout girl, I always end up making excuses for having bought so little. 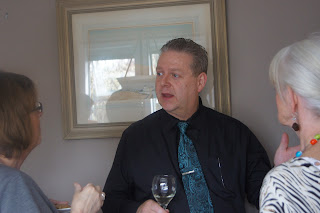 Fred Bjarnason discussing the intricacies of being a chef with Judy Wilson and Linda Bjarnason, both of Nanaiamo. They braved driving over the dreaded Malahat to join the party.
The evening before the reception, I bought a patio set, a table and two chairs. Metal. Nowadays, everything comes in boxes. You’re expected to assemble what you buy using directions written by someone whose learned English off corn flakes boxes. The nightmare of Christmas Eve is now with us every day. I started to put together a chair. Three legs fit but not the fourth. The factory hadn’t drilled the necessary holes. The next morning, I raced to Zellers, gave them the pieces, grabbed a display chair and fled through the door. Nothing beeped. No sirens screamed. No police cars cut me off before I made it home.
At two thirty when the first guests arrived, JO had everything organized. Bottles of bubbly on the dining room table, food around the perimeter, everything overlooked by the ceramic cat I’d bought for a centrepiece, there were daffodils and ferns in a vase on the patio table.
None of the guests wore white gloves. If they checked for dust, they did so discretely. Thank God. Instead, they engaged in lively conversations, chatted with Atli and Þruður, Atli gave a marvelous, funny, informative talk, then answered questions, the food mostly got eaten, the wine bottles drained, the coffee cups used. There was lots of laughter. The weather was grand.It was an afternoon to remember.
However, there was only one chair with the patio table on the balcony. The one that I´d absconded with from Zellers. I couldn´t finish putting together the second chair because the kit had two right legs.Life is filled
with the unanticipated.
*****************************************

PS: Today, I returned to Zellers and, amazingly, surprisingly, wonderfully, after looking at the two right legs, a clerk went and got me another display chair. Now, that is good customer service.