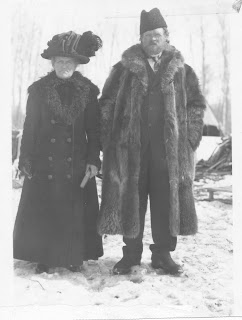 Photograph taken by Kristin Johnson (Valgardson), their daughter.
These are my great grandparents, Ketill Valgarðsson and Soffia Sveinbjarnardóttir.
Ketill did not come to Canada to steal, rob, pillage, burn down buildings, kidnap people and sell slaves. He worked in Iceland, like his father, as a laborer. He came to Canada to work.
He did not wear a Viking helmet with or without horns.
In Iceland, he took care of dairy cattle and sheep. He cut hay. He fished. He had no future. He had no opportunity to advance beyond being a hired man. He worked for his room and board, a small amount of money and some cloth with which to have clothes made.
He was the son of Valgardur Jonsson and Kristin Brynjolfsdottir. His mother died in Iceland and his father, who was seriously ill when he came to Canada, died in New Iceland and was buried at Sandy Bar outside of Riverton in an unmarked grave.
Ketill came to Canada in 1878 on the SSWaldensian. He and his father traveled from Quebec City to New Iceland. Ketill worked on the railway and as a fisherman.  He moved to Winnipeg, married Soffia, and worked for the city as a laborer and then as a foreman.
In 1894, 16 years after his arrival in Canada, he was able to start a dairy business and to buy land at the northwest corner of Simcoe Street and Ellice Avenue. He had a business there until 1903. He then moved to Gimli and set up a flour and feed business that lasted until 1909. He bought a farm outside of Gimli which he called Adabol. He lived there until 1920. He moved back to Gimli, built a house there, a house in which I lived for the first year of my life.
He was not a pagan. He was a Christian. He didn´t worship Thor or Odin or any other gods. He was one of the founders of the Tjaldbud congregation in Winnipeg in 1893. When he moved to Gimli he became a member of the Lutheran church council.
He was active politically in that he was a member of the first council of the Village of Gimli in 1908.
He wasn´t a goði or a bishop or even a rich farm owner. He was a farm laborer. He came from a hard life to a hard life. It was no fun being a laborer on the railway. I expect it was no fun being a laborer for the city of Winnipeg.However, his work and his thrift meant that he could save money and buy land and start a business.
He and Soffia had three children. In Iceland those children would have become farm laborers, if not paupers. Raised in Gimli, one son, Sveinbjorn, became a master carpenter; the other son, Valentinus earned a gold medal in Mathematics at the University of Manitoba and a Master´s degree and became a high school Mathematics teacher in Moosejaw; Kristin, his daughter, became a bookkeeper and an accomplished artist.
In his retirement, he was financially independent. He’d raised and educated his children so that they did not have to be indentured servants. He owned his own house. He’d owned businesses. He could afford to keep a fine coffin in his basement for when he died. He wanted no pauper’s grave.
He and Soffia are my heritage. I’m proud of them. They’re the heritage I embrace. Ketill never killed anyone, stole from anyone, burned down any houses or monasteries. Soffia never scared off a bunch of angry aboriginals by beating her bare breasts with a sword.
They came with little or nothing. They made a good life for themselves. Their descendants have prospered.
Ketill’s story is not unique. I expect it is the story of many, if not all, of the people who came with him on the SSWaldensian. This is our real heritage. Laborers, farmers, domestics, paupers. Seeking opportunity. Building a life, a shovel full of earth at a time, adapting to a new society, learning a new language, adjusting to foreign neighbours, finding hope and solace in their church. Being brave.
My last memories of Ketill are the taste of peppermint and his woodpile. The peppermint because he always gave me a peppermint when I went with my father to visit him and the woodpile because it was while he was chopping wood at 84 that he had a heart attack and died.