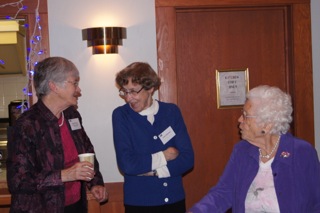 Emily Campbell, Carol Johannson, Ruth Olafson
It was a great evening. Tom and Beverly and the volunteers did a great job of the food. Jodi, as usual, decorated the hall beautifully. We had prizes and two of them were vinarterta. Can’t get better than that. Especially when made by Margo and Vorna. The cookie layers just right, not too thin and not too thick. The prune filling of this prune torte cooked to a consistency that lets the the seven layers melt in your mouth.
We know that the annual Thorrablot is all about food. Feasting in the name of Thor. It raises images of Vikings on a rampage, Vikings at a long table swilling back ale and ripping meat off the bone with their teeth, bellowing and challenging and yelling for wenches and blood.
Sorry if anyone is disappointed. We’re much more sedate. We’re the sheep farming kind of Thorrabloters. The kind who get dressed up and arrive on time. The kind who shake hands and hug and talk quietly in small groups as we catch up on news. We’re Christianized, urbanized, civilized Vikings.
The kind of Vikings who bring wives and children and grandchildren with them. Besides, most of us are at an age where our wenching days are done. Morning after hangovers are a thing of the past. Given the liquor laws in BC, a half dozen beers has given away to sipping on a glass of wine. Imagine what Viking times would have been like if they could have been fined for drunken longboating or horse riding. It would have put a damper on things. 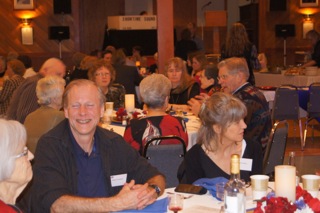 Wayne Erickson, Lorie Olson
That’s okay. The rúllupylsa on brown bread is great. The hangikjöt, cold or hot, is delicious. The lox and the pickled herring melt in your mouth. I’m not sure what the Vikings would have thought of salad. They’d probably have fed it to their horses. I mean, what is the difference between lettuce and grass? But then, I doubt if anyone of them were on a diet. If they had high blood pressure, they didn’t know it. I suspect that with their diet of fish, meat and milk products diabetes wasn’t a problem. I like salad and the salads were really good but then I’m half Irish.
Personally, I like my parties quiet. It’s probably my age. Although, if a party is noisy, I just take out my hearing aid. The disc jockey did a great job. He’s a nice guy and he knows how to tailor his music to the crowd. It’s in the background, not competing with everyone who is trying to communicate.
We probably should get up and rock around the clock but my arthritis bothers me when I start whooping it up. A waltz or two usually is fine.
There was no hakarl this year. I didn’t miss it. I remember what Manitoba backhouses smelled like on a hot summer’s day. I don’t need to be reminded.  I’ve not been tempted to kill a shark and bury it in the sand up at Tofino for six months and then dig it up and slurp it down.
The dried cod was good. I like dried cod. My guests thought it had the texture of cardboard (must be memories from their childhood, I can’t see them chewing on cardboard now). I ate their share. I skipped the butter. My doctor says I’ve got to take off ten pounds. 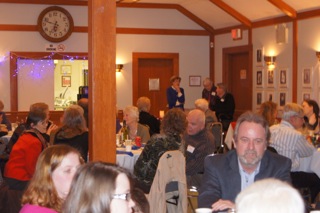 The crowd at Norway House for Thorrablot
The best part of the evening was the company. It always is. A lot of people only turn up for Thorrablot. You get to shake their hand once a year and catch up on their life. It’s nice to see that we’re still with us. We’re not as us as we used to be, of course. Some people from that first meeting for the establishment of the Icelanders of Victoria Club that was arranged by Alphonse have died. Mattie Clegg (Gislason) is gone.Mattie was a dynamo. Great musician and our first Fjalkona. Amma Runa is gone. Runa was always at every event in her Icelandic dress serving coffee. Eric Clemens, our joyous Christmas elf, slipped away and even our friendship could not hold him here. I hope they have Christmas parties in heaven. Norm Jonasson departed unexpectedly, shockingly. He used to organize the cooking for the Thorrablot, worked all day in the kitchen with his family. There are other members who have left forever.
Then there are other people who have disappeared because they have moved. Lois, I heard, will be moving to Vancouver. We’ll miss her.
That’s okay. These things happen. You get to be a certain age and you aren’t shocked anymore by losses.
However, you are comforted by fellowship, community and ritual. We can all afford to buy our own rúllupylsa or skyr, make our own pönukökur or vinarterta but eating it by ourselves isn’t the same as sharing a meal.
Coming together, whether in church, or at sports events, for parades, picnics, celebrations, are one of the ways we define ourselves, let ourselves and others know who we are. Even if we are gradually shifting our identity from Icelandic to Icelandic-Canadian to Canadian, our Thorrablots and other events, help us to make the change over time, mixing together the old and the new. That’s why we can have smoked mutton and roast beef, rúllupylsa and potato salad, old memories and new hopes.