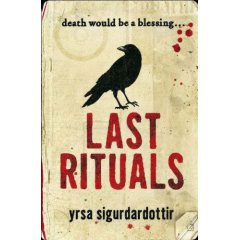 This murder mystery, Last Rituals, in spite of its focus on magic and witches, charmed me. It charmed me because of the characterization, particularly that of Thóra Gudmundsdóttir and her family and her potential German boyfriend, Matthew.
Her family life is a slow motion train wreck. She´s divorced, her kids don´t like spending time with their dad, her sex life has been reduced to zip for two years, and she´s always short of money. She works for a small, very small, law firm and the secretary whom she can´t fire might as well have arrived from hell. At thirty-six, she’s only left with memories of what it was like to do impulsive shopping, go for weekends to Europe, never worry about paying bills, having a car that is dependable.
The other thing that charmed me was the humour. The book, with Thóra having to solve the murder of someone who was fascinated in satanic rituals and torture, is gruesome in places and, yet, I often found myself laughing out loud.
Often, the humour comes from the contrast between the world around the murder and the mundane world of family and personal life. The fact that Matthew, an investigator from Germany, is not Icelandic and doesn´t speak Icelandic allows for situations that can´t help but make a reader smile or laugh. These are the kind of scenes that one wants to share, the kind that make a reader want to say, “Listen to this,” then read the passage to them.

I read My Soul To Take first, then Last Rituals. I wish I‘d read them the other way around because Thóra‘s story about her family life continues from one to the other. They‘re like a family serial punctuated with crimes that have to be investigated.

Yrsa has a tremendous ability to pick up on some minor detail, incorporate it into the life of the main characters, the weave it through the story like a pattern in an Icelandic sweater. For example, the secretary from hell, Bella, keeps reappearing. The things she does and refuses to do make anyone who has dealt with numerous secretaries groan in recognition but Bella is also used to help define the relationship of Thóra and Matthew and to show some of the limitations of Thóra’s character.
The material involved with the murder is fascinating in and of itself. For people who don’t know much or anything about Iceland’s history, there’s enough explanation that what is going on can be understood but not so much that it reads like a treatise or a tourist brochure. As in any good murder mystery, there are many suspects, many details that make no sense at the beginning, many false leads and only one logical conclusion.
When Yrsa lectured in Victoria for the Richard and Margaret Beck Trust, the overflowing crowd asked many questions. One that was asked many times in slightly different forms was how could she be a director of Verkis, one of Iceland’s largest engineering firms and write murder mysteries. Some of these questions were about time. She’s not just an engineer but a wife, mother, grandmother. But others were more about how can an individual, female or male, be an engineer and a murder mystery writer? How can both of these be in the same head? Or heart?
I see no contradiction between the engineer and creative artist. During the decades I taught creative writing at the University of Victoria, I always emphasized that students should do a double major. That second major could be just about anything but the ideal student I was always seeking was the creative writer who was also a physicist, chemist, biologist, anthropologist, engineer, mathematician. When someone gets beyond rote learning in the sciences, they become not just an analyst but a creative thinker. Marry that with the ability to write well and they have the potential to bring worlds to us that we normally never get to see.
There’s also the reality that most writers and artists in Iceland (and Canada) live in poverty. Even those writers whose books you see being reviewed in The Globe and Mail or The Vancouver Sun or who appear on TV seldom make a decent living. One highly successful book doesn’t provide a lifetime of income. To make as much as a dentist, a writer would have to have an international best seller year after year. That’s why the lesson provided by Yrsa is so important to young writers. No profession keeps you from being a novelist or a short story writer or a poet but many a profession provides the money to live well while writing.
In Yrsa’s case, it is easy to see her engineering mind at work. Her novels are complex, they require numerous narratives and subplots to succeed. The narrative structure all has to fall into place with each character, each event, each detail carrying the story forward to its necessary conclusion.
Successful engineers must not just be able to manipulate numbers, they must be able to motivate, organize and supervise people. That’s what a novelist does. Yrsa organizes her people and her flow chart (plot) in such a way that she creates novels that are page turners. She knows how to organize a project and she knows how to organize a novel so that it is filled with suspense.
If you haven’t read Last Rituals, buy it, read it. I got my copy at Tergesen’s. Other book stores have it. It’s only 17.99. That’s not much for hours of good entertainment. Besides, if you are reading this blog, you probably have some Icelandic background. Besides wearing a plastic helmet with cow horns and drinking Icelandic beer at Islindingadagurinn or slurping up coffee with vinarterta at Amma’s restaurant, reading is required if you want to claim you’re proud of your Icelandic heritage.