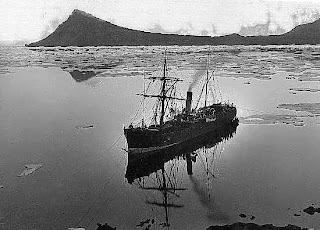 STEAM BETWEEN LEITH AND ICELAND
NOTICE TO TOURISTS, ANGLERS, AND SPORTSMEN.
The First-Class Steam-Ship “CAMOENS,” 1054 Tons register, 170 Horse-power, will leave Leith for Iccland once a fortnight, going round the Island, commencing end of June; calling at the Faroe Islands if required. Thus affording Tourists, Anglers, and Sportsmen an excellent opportunity of visiting that Interesting Country, its Burning Mountains, Geysers, Salmon Rivers, Shootings, &s.
The S.S. “CAMOENS” is a Full-Powered Fast Steamer with superior Passenger Accommodation; has spacious Saloon on deck. The State-rooms are lofty and well-ventilated, and situated quite apart from Dining Salon. For further particulars apply to
R. & D. SLIMON
LEITH
During my childhood, one of the great myths about Iceland was that it was isolated. While it was true that individual farms were isolated by both the lack of roads and terrible weather, that didn’t stop tourists from coming to se this fabled land. The sagas brought people. The sagas were read, studied, admired. The figures in them were heroic. The stories fired the imagination. As well, the geology, the land of fire and ice, brought both explorers and tourists. Probably, the single greatest attraction was the geysers. These were one of the wonders of the world.
Reykjavik, even when it was no more than a small village, was the focal point for both explorers and tourists. Here, ships anchored, supplies were brought ashore, horses were bought or hired. Guides were contracted. Iceland was an endless source of fascination for members of England’s Royal Society. Expeditions were financed for everything from exploring the possibility of mining sulphur to cataloguing Iceland’s birds.
In 1875, as our Icelandic ancestors were beginning to flee from failing hay crops, volcanic devastation, and political oppression, Charles Lock was leaving Granton on the 6th of July on the steamer, “Fifeshire” for Iceland. The boat had been chartered to carry Icelandic horses back to the British Isles. Locke and his party land at Húsavik.
By 1879, when his book The Home of the Eddas is published, he feels that so many books about Iceland have been published that he has to reassure his readers that his book has new material. He also points out that while other explorers and tourists only stay for the summer, he has spent an entire year in Iceland and that before him, only Henderson (1814-15) and Dillon (1834) have spent twelve consecutive months in Iceland.

He also reassures his readers that he did not spend his year in Reykjavik and Aukeryri both of whom he says are Danish. Since he was searching out the locations of the Eddas, he spent his time with real Icelanders.

He believes that so many people are interested in visiting Iceland that at the end of  his book, he includes information for potential travelers.

His first information is about travel routes and costs. Two regular mail steamers, he says, sail during a portion of the year between Copenhagen, Leith or Granton, the Faroes and Iceland. One of them makes  short tours to ports along the Icelandic coast.

Name  Departure from Copenhagen  Leith or Granton  Arrival Reykjavik
Phoenix                               1 Mar 9 a.m                         3 Mar                     15 Mar
Phoenix                               17 Apr 9 a.m.                      21 Apr                   29 Apr
Diana                    15 May 9 a.m.                    19 May                  4 June
Altogether, he lists nine sailings with the last being on Nov 8 from Copenhagen, arriving in Reykjavik on Nov 22. That is the ship that anyone who has been delayed by traveling conditions would have been in a panic to catch. Miss it and the traveler is likely to be spending the winter in Iceland. Henderson, when he deliberately stayed, got through the darkness by reading the library he’d brought with him.The unprepared traveler could suffer through a very bad winter.
Locke also details the coastal trips. The first one, I assume because of the ice, isn’t until May 25 to Vopnafjorður, then to Akureyri, 27 May; Skagaströnd;Ísafjorðr, 29 May; Flateryi, 29; Þingeyri, 30; Bildudalr, 30; Bíldudalr, 30; Stykkishólmr, 1 June;  and back to Reykjavik, 4 June.
The fares that he gives are as follows: Between Leith and Faroe, 1st class single ticket, 3 pounds, return (same voyage), 5 pounds. Between Leith and southern ports of Iceland, 1st class ticket, five pounds, return (same voyage), 9 pounds. Children under 2 years traveled free. Between 3 and 12, they paid half fare. Fares included 100 pounds of luggage. Children could have 50 lbs of luggage. If you had more than the maximum amount, you paid 9d for every 10 lbs. You had to pay extra for meals. Adults 5 shillings, 3 pence a day. Children paid 3 shillings a day.
There were cattle boats but Lock recommends they not be taken. He says that if you are timid, are distressed by rank smells, or are upset by coarse food coarsely served, you don’t want to be on them.  He says that there is now a ship dedicated to shipping salmon and it be better to take that than a cattle boat.
These fares seem quite small. However, in context, they were quite a lot of money. A cook in England, in a large house with a staff might earn 20 to 30 pounds a year. Teachers might ear 43 pounds a year. If such a trip cost in all about 15 pounds that would be more than a third of a teacher’s salary. If a teacher today is earning sixty thousand dollars that would be the equivalent of making the round trip to Iceland at $20,000.00. That sure makes today’s airfare look cheap.
People coming to visit the ports of Iceland had money. Even if they just came as tourists and didn’t travel around the island, renting horses, hiring guides, paying for meals and services, the cost was substantial. But, still they came, both men and women. In groups and singly. Iceland was, after all, the land of the Eddas and the Sagas and it fired the imagination.