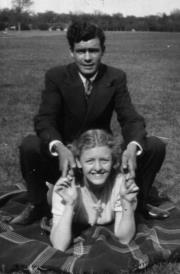 It is with a great deal of sorrow that we announce the death of our mother and grandmother, Rae.
The last part of her life was spent in Betel, Gimli, Manitoba. Most people don’t want to go into a nursing home but she did. Practical person that she was, she recognized that her increasing deafness and macular degeneration meant she needed the care available at Betel.
Rae was predeceased by her husband of sixty-nine years, Dempsey Valgardson, her son, Dale, her mother, and her father. She had two brothers both of whom died as small children.
Rae is survived by her son, William (Bill), her daughter-in-law, Olena, her grandsons, Val and Shawn, and granddaughters, Nancy-Rae and Kim. Rae has six great grandchildren: Sean, Rebecca, Jordan, Holly, Dawson and Mackenzie.
Rae was born in Winnipeg. She attended Kelvin High School. Her parents came to Gimli as summer cottagers. They hired Dempsey’s father to build a cottage. Dempsey was working with his father singling the roof on a hot summer’s day. The family story is that Rae took so many glasses of water up the ladder to the roof where Dempsey was working that she sunburned the back of her legs.
After they married, they stayed for a time with Dempsey’s grandfather. Rae, a city girl, had to learn to live with a woodstove and a grumpy old man. A year later her parents bought them Captain Stevens’ house where they lived most of their lives. Rae adapted to country life and always said that being an only child had been lonely but that she was never lonely after moving to Gimli. There were lots of relatives and friends for Christmas dinners and Icelandic Celebrations and birthdays and weddings. She was active in the Lutheran Ladies’ Aid and taught Sunday school. The home of Dempsey’s step-mother, Katherine, was like a second home for her.
She went to Dempsey’s fish camps with him, cooking for his fishing crews. She traveled by boat in both storm and calm. She drove the muddy road between Gimli and Frog Bay transporting supplies. Her great joy, though, was taking a car load of children—her grandchildren and their friends—to the fish camp for weekends. She baked endless lemon pies, played endless games of cards, created a happy place for numerous children.
Rae’s life changed one day when Dempsey came home from a meeting of the Credit Union board. He had the Credit Union books with him and asked Rae if she’d take care of them for two weeks. Those two weeks turned into twenty years. At first she conducted Credit Union business in their living room but then Dempsey built the commercial building at Centre and Third. She once said the hardest thing about being a manager in the early years was going to conventions where she was the only woman.  Something she was greatly proud of was that she never hired a man because she felt opportunities for women were so few.
This city girl from Irish Protestant parents adapted so well to Gimli and its Icelandic culture that someone once suggested her for Fjalkona. However, her father came from Magheraluljenny, Ireland, not Reykjavik, Iceland.
Some people are remembered for making money. Some for attaining political power. Some, like Rae, for making butter tarts, for Christmas dinners, for having an open door and an open heart.