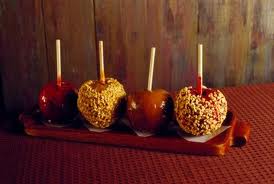 There was a lot of excitement at Halloween. It started with our mother asking us what sort of costume we wanted and then she improvised one for each of us. I remember nothing of the many costumes I wore except for the year I went Halloweening as a pirate.  I think I was a bit of a dandy because I’d seen a picture of a buccaneer with a shirt that had lace cuffs and I wanted that. The crocheted dust catchers on the arms of the living room sofa may have been pressed into service.
There wasn’t a lot of money around. A penny still had value and you could get two-for-a-penny or even five-for-a-penny candies at Greenberg’s store. No one passed up a penny lying on the ground. A movie only cost fifteen cents, a CocaCola five cents, a bag of sunflower seeds, five cents. If you found a penny, you had twenty percent of a treat. It took a bit of wheedling to get a nickel from your parents so the idea of going from house to house collecting apples and candy fired the imagination. In the week before Halloween, instead of counting sheep after I went to bed, I counted apples and candy falling into my bag.
Our mother provided my brother and me with a pillow case each. We had to hold them at the middle so they didn’t drag on the ground.
We didn’t go far, probably no more than two square blocks. We went without adults but as a group of four or five kids. We didn’t go out until after it got dark so we kept together as we navigated the back lanes or the front sidewalks. We yelled “Halloween apples” or “Trick or treat”, although we didn’t have any tricks up our sleeve. The adults who came to the door were appropriately scared by our costumes, dropped apples or candy into our bags, pretended not to be able to guess who was behind which mask.
When we got home, we poured our loot onto the kitchen table. It was mostly apples, many bruised from our bumping our bags into things, but there was a smattering of store candy and homemade fudge. Our mother turned most of the apples into apple pie but the apples that had survived their trip with the fewest bruises provided us with an apple a day until they were all gone.
For a couple of years, my mother got us to help her make candied apples. We carefully picked only perfect apples at Bjarnason’s store. Red, round, without bruises. When we got them home, we washed and polished them. We put sheets of wax paper on two cookie trays. Our mother carefully put the wooden handles into the apples. As she boiled the sugar and water, the house filled up with the syrup’s sweet smell. These special apples went to special friends and relatives and, of course, we kept one for each of us: my mother, my father, my brother, myself.  I still can feel the glazed sugar breaking as I bit into my candied apple, the sweetness of the sugar, the slight tartness of the apple, the delicious, luxurious texture of crystallized sugar and apple as I chewed.
Some years there was a Halloween party at the community hall. There was food and dancing and the adults went all out, creating elaborate costumes, often revealing a side of themselves few had suspected, the matron dressed as a dance hall girl, the banker as a river boat gambler, the quiet housewife as a princess. There were always lots of angels. At some point in the evening, the dance music stopped, the judges took their place on stage and we all paraded around the hall in a large circle. We had to go around to the music many times before the judges were able to pick the winners.
There were witches, of course. What would Halloween be without witches? They were a little scary, especially if their costume was well done or if the witch was particularly good at a loud cackle. However, these witches had no history, no embedded culture of folktales and legends to help them be frightening. In Europe it had been believed at one time that witches would gather on All Hallow’s Eve, arriving on broomsticks at a party, a party hosted by the devil. These witches were considered dangerous because they could cast spells that would bring harm to people, make them or their animals ill, cause bad luck, or control people’s actions, causing them to do evil things. Our witches weren’t dangerous. They often had a piece of candy to offer after their cackle. They liked to waltz and polka and do the butterfly. If you wanted to see witches fly, you just needed to watch a witch dancing the butterfly with a lumberjack on one side and a pirate on the other as the band speeded up the music toward the end of the tune. The witch’s feet hardly touched the dance floor.
There were some tricks. An ambitious group of teenagers once put a farmer’s wagon on top of a barn. They left it there for a day for everyone to admire but the next night took it down. Someone put a half dozen garter snakes into a friend’s car. The friendship survived.
There were always a few spoil sports who wanted Halloween banned because it had pagan roots. This is a party hosted by the devil, they said but if it were, it was a pretty mild and meek devil. The devils that turned up at the Halloween party in red long underwear and horns made from cardboard liked to eat and dance and have a drink out by the woodpile with the angels.