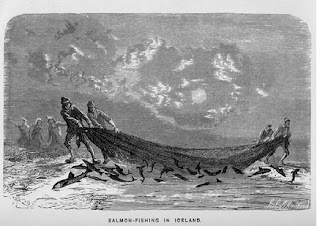 In 1845, Ida Pfeiffer made a trip to Iceland by herself.
There was outrage in some places at the idea of a woman traveling alone in such an isolated, difficult place. Some of that outrage was simply at the idea of a woman traveling alone. Since early childhood she had wanted to travel and with her children grown, she decided to travel, to keep a diary and, if possible, to have her diary published. She accomplished all her goals.
Her books, written in German, were widely translated. She sugar coats nothing in her travels. She talks about both kindness and meanness, both honesty and dishonesty, cleanliness and dirtiness. She describes the rigors of sea-sickness and long days in the saddle without excusing herself in any way.
Her book, now reprinted in a modern version, A Visit to Iceland and the Scandinavian North, can be ordered over the internet and, although her portrait of Iceland and Icelanders thirty years before the emigration to North America began isn’t always flattering, everyone of Icelandic background should read it. It explains a great deal of why our ancestors left Iceland for the uncertainty of North America. I was shocked by some of the things I read but, when I finished, I had a better understanding of why Jón Sigurðsson (June 17, 1811 – December 7, 1879) dedicated his life to the cause of Icelandic independence.
Ida Pfeiffer visited Iceland in 1845. Jón was then 34. He knew intimately the conditions in which Icelanders were living. He knew that until Icelanders could create their own laws, keep and spend their own taxes, they would never live in anything but poverty.
Ida lands at Havenfiord. Here, she sees houses that belong to merchants. They are, she says, like houses in Europe. Everything comes from Copenhagen. There are mirrors, cast iron stoves, beautiful carpets, sofas, neat curtains, even musical instruments.
It is then a shock when she describes how the Icelanders live.
“From these handsome houses I betook myself to the cottages of the peasants, which have a more indigenous, Icelandic appearance. Small and low, built of lava, with the interstices filled with earth, and the whole covered with large pieces of turf ,they would present rather the appearance of natural mounds of earth than of human dwellings, were it not that the projecting wooden chimneys, the low-browed entrances, and the almost imperceptible windows, cause the spectator to conclude that they are inhabited. A dark  narrow passage about four feet high, leads on one side into the common room, and on the other to a few compartments, some of which are used as storehouses for provisions, and the rest as winter stables for  the cows and sheep. At the end of this passage, which is purposely built so low, as an additional defence against the cold, the fireplace is generally situated. The rooms of the poorer class have neither wooden walls nor floors, and are just large enough to admit of the inhabitants sleeping, and perhaps turning round in them. The whole interior accommodation is comprised in bedsteads with very little covering, a small table, and a few drawers. Beds and chests of drawers answer the purpose of benches and chairs. Above the beds are fixed rods, from which depend clothes, shoes, stockings, etc. A small board, on which are arranged a few books, is generally to be observed. Stoves are considered unnecessary, for as the space is very confined, and the house densely populated, the atmosphere is naturally warm.
“Rods are also placed around the fireplace, and on these the wet clothes and fishes are hung up in company to dry. The smoke completely fills the room and slowly finds its way through a few breathing-holes into the open air.
“Fire-wood there is none throughout the whole island. The rich inhabitants have it brought from Norway or Denmark; the poor burn turf, to which they frequently add bones and other offal of fish, which naturally engender a most disagreeable smoke.
“On entering one of these cottages, the visitor is at a loss to determine which of the two is the more obnoxious—the suffocating smoke in the passage or the poisoned air of the dwelling room, rendered almost insufferable by the crowding together of so many persons.”
The contrast between the homes of the Danish merchants and the Icelanders could not be starker.
“The whole commerce of Iceland thus lies in the hands of Danish merchants who send their ships to the island every year, and have established factories in the different ports where the retail trade is carried on.
“These ships bring every thing to Iceland, corn, wood, wines, manufactured goods, and colonial produce, etc. The imports are free, for it would not pay the government to establish offices, and give servants salaries to collect duties upon the small amount of produce required for the island. Wine, and in fact all colonial produce, are therefore much cheaper than in other countries.
“The exports consist of fish, particularly salted cod, fish-roe, tallow, train-oil, eider-down, and feathers of other birds, almost equal to eider-down in softness, sheep’s wool, and pickled or salted lamb. With the exception of the articles just enumerated, t he Icelanders possess nothing; thirteen years ago, when  Herr Knudson established a bakehouse, he was compelled to bring from Copenhagen, not only the builder, but even the material for building, stones, lime, etc; for although the island abounds with masses of stone, there are none which can be used for building an oven, or which can be burnt into lime: everything is of lava.”
The next time you visit Iceland, make a pilgrimage to the statue of Jón Sigurðsson, look around at the buildings, the cars, the people, and say thanks. Don’t just leave it to once a year on June 17.