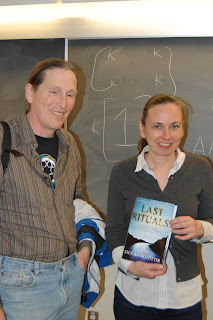 Photo credit for Yrsa and fan, P. Baer
It’s not often that when an audience begins to gather for a Richard and Margaret Lecture at the University of Victoria, that the room has to be changed for a larger one. The fact that this is what happened for Yrsa Sigurðardóttir’s lecture, “Nordic Noir and the Writing of Crime Fiction” reveals the popularity of Yrsa’s writing.
Although she did not start writing until 1998, she already has four crime novels published in English:  Last Rituals, My Soul to Take, Ashes to Dust, and Veins of Ice. Those who want to practice reading Icelandic could do worse than buy a copy of one of her novels in both Icelandic and English and read both.
The audience for Yrsa’s lecture was ninety percent women. From the questions they asked after the lecture, it was obvious that the female members of the audience were intrigued not just by Yrsa’s writing but also by the fact that she is a civil engineer who has worked on hydro construction projects in Iceland. Add in the fact that she is both a mother and grandmother and you can see why a major question was, “How do you do it?”
At the beginning of the lecture, Yrsa defined Scandinavia for the audience: Norway, Denmark, Sweden, Finland and Iceland. All of these countries have small, peaceful populations and low crime rates but crime fiction is highly popular. Only Finland has a lot of violence and Yrsa put that down to Russian and Lithuanian mobsters.
She said that in actual fact there are no murders in Iceland that are the result of tricky plots or conspiracies. The murder rate is low. There is so little violence that the police don’t carry guns. Some years there won’t be a single murder. When a murder happens, it is usually two men drinking at a party. Usually in a kitchen. They are both drunk. They get into a fight. One grabs a knife off a counter and stabs the other. There are lots of witnesses. There’s no place to run. The killer waits. The police are called. The court sentences the killer to sixteen years in jail. End of story. There’s no mystery.
Yrsa said that there is a difference between a thriller such as those written by Steig Larson where the worst is yet to come and a crime novel where the worst has already happened.
There is a history of Icelandic crime fiction but it is small. Around 1910 there was Jóhann Magnús Bjarnason who was called the Sherlock Holmes of Iceland. In spite of Iceland being such a peaceful society, there currently are a lot of Icelandic crime writers such as Arni Þórarinsson, Eyrún Tryggvadóttir, and Helgi Ingólfsson.
The most successful of the crime writers is Arnaldur Indridason. He’s written 14 novels. He has won major awards for his murder mysteries including the Golden Dagger for The Silence of the Grave.
Many audience members wanted advice on how to succeed as a murder mystery writer.
Yrsa said to start with killing someone good or innocent. Nobody cares about who bumps off a drug pusher. Set up a mentally challenging and intriguing murder and then solve it. Use every opportunity to make the solution more difficult and complex for the investigator. The protagonist has to be believable and sympathetic.
If the reader doesn’t like the main character, she won’t buy the next book.
Readers want someone they can relate to. Don’t shovel information onto the readers. Slowly introduce secondary characters when appropriate, not all at once. Make sure your characters have different names so readers don’t get confused. Make the hero’s characteristics consistent.
Her rules obviously work because her mysteries have been translated into 30 languages. The United States, it turns out, is the most difficult market. A lot of her books are published in Germany but very few in the USA.
She ended her lecture with an astute comment. After the Icelandic economic crash, she realized that all those to blame were men. Since women are just as capable of being greedy for money and power that was a clear indication that the old boy system didn’t allow them to get to the top.
(This article first appeared in a slightly different form in Logberg-Heimskringla. Google it and buy a subscription.)