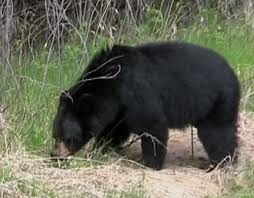 The short story, What The Bear Said, takes place in New Iceland. The settlers have lived there long enough that they have spread out from the first settlement at Gimli and have built cabins. In Iceland, these people survived by raising sheep and dairy cows plus going cod fishing once the hay harvest was over.
Something that many people don’t understand is that the Icelandic settlers were not farmers. That cannot be stressed too strongly. They cultivated no land in Iceland. The home field, that precious island of grass, simply received a topping of dried and pulverized sheep manure once a year. Nothing was ploughed. No seed was planted. Land in Iceland that was productive was pasture for grazing by sheep and cows. The term bonder or farmer is, in a Canadian context, misleading. Icelanders were shepherds and/or dairymen. The land that did grow grass was often marginal, grass production scanty. No matter how hard anyone worked, sheep and cattle could not produce enough food for the population. Essential protein had to come from fishing.
This dual production of food led the settlers away from arable, farmable land in Canada. The settlers chose to settle along the shores of Lake Winnipeg even though the land close to the lake was often swampy. Those who were fortunate, like Gusti Axelsson, claimed higher ground.
The settlement at Gimli has been established, enough that Gusti can row there in his skiff to get supplies.
Gusti lives in what I call the In Between World. He was born and raised in Iceland, emigrated to Canada with his wife and one child. In New Iceland, they have had two more children, a son and a daughter. The daughter,  Ninna, is the apple of Gusti’s eye.
Gusti and his wife are clearing and planting the land. The children do whatever work they can and have the task of picking potato bugs off the potato plants. Survival requires that everyone help.
New Iceland is a truly foreign place. In Iceland, except for the occasional polar bear that arrives on an ice flow and is quickly killed because of its danger to both people and sheep, the Icelanders have no experience with large wild animals.
Bears in New Iceland were, in fact, a problem. Even at my father’s fish camp in the 1960s and 70s, they were a problem, tearing apart fishing camp kitchens, ripping open icehouses and stealing meat. Bears are powerful and fast. The bears of New Iceland must have seemed like mythical, mysterious creatures, lurking in the wilderness.
Folktales often include animals with extraordinary powers and relationships between people and animals that are magical.
The tradition goes back into the earliest Scandinavian mythology. There are Odin’s wolves, Geri and Freki, plus Huginn and Munnin,  his ravens. There are selkies who can transform themselves from seals into  humans and back again. There are troll fisks, eight legged horses, Fenris, the wolf, and the nykur or water horses. And many more. There is nothing strange about an Icelander having a special relationship to an animal.

Gusti, like the vast majority of Icelanders combines being a poet with superstition and a relationship to the natural world that goes beyond logic. When a starving bear with a cub appears, he doesn’t kill it. He shows it mercy. He feeds it and the cub with waste fish, maria, a fish he won’t eat because it doesn’t have scales. “Of all the marine animals, these are ones you may use for food. You may eat anything from the water if it has both fins and scales, whether taken from salt water or from streams. (Leviticus 11:19)

One of the great hardships for the Icelandic settlers was the weather. People with no experience of Iceland assume it is like the arctic. Instead, because of the Gulf Stream, the climate while wet and windy and highly unpredictable, doesn’t have the extreme temperatures of Manitoba. Everything for the settlers was new. The ways of securing food, the plants, the animals, the weather, the landscape. The long cold winters, the sudden blizzards that left deep drifts of snow that lasted sometimes from early fall until late spring were new.
Gusti, in befriending the sow and her cub goes against the general mores of the community. He’s advised to shoot the bear or to hire someone to shoot the bear. He tries to explain what happens to him when he communicates with the bear but is mocked.
His kindness is repaid when Ninna is lost? Or is it? Is it just a myth created by people who have come from a land filled with ghosts, trolls, huldafolk, and magical creatures such as sea cows?
When I was a boy, someone shot and killed a sow with two cubs. The cubs adopted our fish camp and the people in it. They were “wild” animals but they threatened no harm. They were quite curious about what people did. Any danger from them would have been something done on our part that startled or threatened them. However, people often kill other species not because they pose any great danger but because people are afraid. The logic seems to be, “I’m afraid of you so I will kill you.” The same rule appears to be regularly acted out in human relations. At the moment, there’s a tragic case in Florida with a  young man being shot because someone was afraid of him. Also, some years ago a Japanese student (in Florida again) went out on Halloween trick or treating. He was wearing a mask. A homeowner shot and killed him.
Perhaps this story is not just about a different way that the early settlers could (and sometimes did) relate to t heir environment but might be seen as a way of approaching all that is not us.