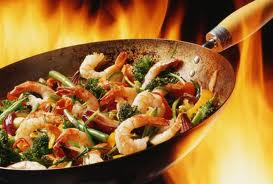 I think I love cooking because both my mother and father loved cooking. The sweet and sour pickerel cheeks, the baked whitefish, the pickerel fillets, were all made with love.
My father came in from the lake, cleaned the fish, filleted it, if the pickerel were big enough, cut out the cheeks. The whitefish usually came as a gift from someone fishing further north on Lake Winnipeg. They made the various pickerel dishes together but it was my mother who made the bread stuffing for the whitefish, then baked it.
My parents were adventurous cooks. “Try this,” was part of their vocabulary. Fish livers, fish roe, beaver tale, moose burgers, venison chops, rabbit stew.
Making something out of nothing was a kind of magic trick. If there hadn’t been a lot of fish in the nets or haircuts in the barbershop, my mother started doing interesting things with potatoes, rice, pasta, usually with some hamburger concoction. But often it was Chinese style food. A sort of Cantonese cooking because we had a Cantonese restaurant in town. The combinations were sometimes a bit odd. Stir fried rice with apple pie for dessert but, then, that’s what Sam Toy served in the Gimli Cafe
.
Maybe that’s why tonight I decided that I’d see what I could make from the odds and ends in the fridge and freezer. I hate wasting food. It comes from my childhood.
Some left over black beans. A half a lime. A part of a red pepper. A broccoli stem. A half a sweet onion.
I put some white rice in my small frying pan. I’ve got so that I prefer using my small frying pan with a lid to using a pot to make rice. I let the rice partly cook, then spread the black beans on top. They were already cooked and just needed heating up. I squeezed the half lime over them, put the lid back and lowered the heat to less than 1.
The black beans would have been fine for protein in the meal but when I checked the freezer, I found four prawns left in a bag. Thawed those out with warm water.
Peeled and cut the broccoli stem in rounds, shredded the red pepper, chunked the sweet onion. It was all still pretty bland so I took two small hot pickled peppers out of half empty jar and threw those into the wok along with the veggies.
Stir fried the veggies and peppers for a few minutes, then threw in the prawns. When the prawns were nearly done, put about half a cup of a sweet mango salsa from an open jar into the stir fry.
When the prawns were cooked, I tipped the wok over my plate and slid everything onto it. I added the rice with the beans and lime.
My folks would have approved. The sweetness of the salsa with the heat of the peppers was delightful. Next time, though, I’ll put in four small hot pickled peppers. I like food that bites back. When I’m in Gimli, the heart of the heart of pickerel fillet country, I’ll make this and put it over the fillets. Or, I’ll make it with pickerel cheeks.
No recipe. Just a sense of what goes together. The trick is not to cook the veggies too much. They need to stay crisp.
Tomorrow’s supper? I dunno. Maybe beans on toast. Depends how lazy I’m feeling. However, I’ve got sort of a yen starting for Trinidadian curried chicken and I have four chicken thighs in the freezer. Alex Campbell brand. No growth hormones. No antibiotics. No arsenic. Just chicken. Let’s see. What will I need? Apples. Okay. Garlic. Okay. I’ll rummage through the fridge and cupboard. We’ll see how I feel about it tomorrow morning since it all should sit in a marinade during the day.