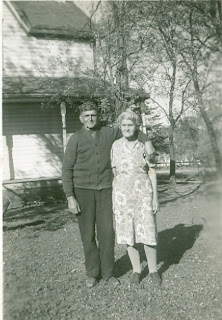 Paul Gottskalkson (he changed his last name to Olson) and his sister,  Guðrun Fridrikka Gottskalksdóttir, in Fridrikka´s front yard on First Avenue in Gimli, Manitoba. Rikka, as she was called, was my great grandmother. She came with her parents to Gimli in 1876 and lived until 1958. I knew her when I was a teenager. She was three when she arrived, lived in Gimli until she went to work at Fort Garry, married a soldier and then they moved to Gimli and he became a fisherman. Her brother, Paul, was a fisherman. No vikings there. Just hard working, dedicated pioneers. The kind of people we celebrate at Íslendingadagurinn.

But, when I was a child, when the long days of summer started with the early sun rising from the east over Lake Winnipeg, then slowly, slowly, climbing golden in the clear blue sky, seeming to barely move as my mother made lemonade and sandwiches and walked with us to the beach two blocks away, two hours later we came home, my brother and I,  exhausted by running in and out of the water, building dams in the ditch that ran through the sand beach, making castles of sand and stones, recouped by having a nap while our mother prepared supper, wakened to eat and to play in the declining, softening light, riding our tricycles up and down the sidewalk, or playing tag on the boulevard or hunting frogs in the ditch in front of the house, the sun slowly, slowly descended to the west, brilliant red and purple, and we finally went to bed exhausted, as we slept, we dreamt of Íslendingadagurinn.
Our summer days were filled with great events. Bonfires in the back yard in which our father put potatoes sealed in Manitoba clay and left them to roast among the coals. We melted fishing leads in a tin can on those coals, made slugs, and pretended they were coins. The swampy cottage lots behind us had fences heavy with squasher vines, those thick tangled vines with egg sized and shaped fruit, and we engaged in squasher war, delighting as the green fruit splattered delightfully on anyone they struck.
During thunderstorms, we lay outside on the covered front porch with lightening fiercely making ragged bolts from sky to land, with thunder shaking windows and rolling overheard. Snug on a comforter, beneath a blanket, we lay and watched the gods throwing furniture in heaven. Or so my mother said.
Always, though, the nights led us closer to Íslendingadagurinn, the Icelandic Celebration held in the Gimli Park.
For there would be the excitement of our relatives coming from near and far, there’d be potato salad and ham, pickles, fresh buns, and pönnukökur, rúllupylsa on dark rye bread, rosettes, vinarterta, and handshakes and conversation, laughter, and bedding down in a tent so adults could have our beds.
There’d be the runners from the long distant race arriving, we’d stand and clap them to the finish line, for ever since its beginning, the Icelandic Celebration, in Winnipeg, Hnausa and Gimli, included sports.
In spite of our constant going to the gate to watch people streaming by toward the park, the adults would spend Saturday catching up their lives.

(Violet Einarson in her Fjalkona royal robes. Violet was one of Fridrikka’s daughters. She took the opportunities presented by life in New Iceland. She became a real estate and insurance agent and, for a period of two terms, mayor of Gimli.)

On Monday, we stood on our boulevard to watch the Fjalkona in her robes and headdress, descending regally from a car to set a wreath before the cairn my grandfather helped to build, local stone topped by a massive boulder, dedicated to the first pioneers, then we’d rush to the park to see her arrive and be led with her princesses to her throne. The park would be aswarm with people, women in Icelandic peysuföt or upphlutur, regal and exotic. We’d be kissed by relatives, for kissing is a thing these Lutherans do in spite of sermons against our fleshy sins.  But after that we’d drift away for speeches are for adults while in the north-east corner there were races with cash prizes for which we could compete.

Everywhere, there were Icelandic flags.
It was a gathering of the clan, a reassembling of a community already dispersed. From near as Husavik, as far as Vancouver Island, they came, these people with impossible names. Our brothers, sisters, uncles, aunts, cousins, friends, would hold us close and often slip a nickel into our hand.
At night, the pavilion shutters were up, the hall was lit, the music drifted through the warm night. We sat on wooden benches along the walls or sometimes got together with other kids and practiced dancing in one corner of the hall. There was talk, and talk, and talk, and laughter, and lives were once more joined.
Icelandic flags and food and friends. Remembering was easy, for in the forties and fifties, we were not so far away from those first barges that landed at Willow Point in cold and storm. My great grandmother was one of those first pioneers and still alive and so were others who were among the first to arrive. And many others, like my father, born in 1918, only 43 years from that arrival in the promised land.
Icelandic flags and food and people streaming by and visiting, and forming bonds again, assuaging loneliness of far places for jobs were scarce and many had left for work out West. But Íslendingadagurinn was magic. Somehow, it drew them back and we were all one again.
Flags and food and Icelandic songs and talk, a day reminding us of 1875, a beach already cold with frost, heavy clouds presaging winter.
Although I did not know it then, what we were doing was reaffirming our identity, momentarily recreating our community, teaching and reinforcing our story of our people’s emigration, our history and links with Iceland.
As people met and visited, listened to speeches, participated in races, attended the traditional dance, we were saying, although we have become far travelers in our quest for education and jobs, although we now live among people with different stories, we are still community, there’ s still history and tradition that bind us, and define who we are.
Íslendingadagurinn is held on the first Monday of August and, the local joke is that God loves Icelanders for there have seldom been anything but clear skies and warm days on this celebration. But, just as certain, this Monday is a pivot point for once it’s over, the air turns colder and, although, there’s still a month of summer, now you can feel the days move toward the fall. Gimli quiets. The summer visitors become less and less. But that was fine, for we’d had our Íslendingadagurinn and with it memory-locked, we use it to keep us warm through the coming winter.
Before we went to sleep, we’d lie awake and think about the day, and in our dreams, there’d be talk and talk and talk, and flags, and the Fjalkona in her robes, and running fast for quarter prizes, and relatives of every size and shape, and bowls of skyr, and by these things we’d get a sense of who we were.