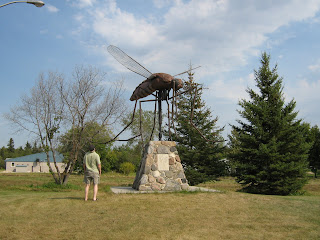 Mosquito sculpture by Marlene Hourd (nee Magnusson)
What a bunch of whiners Winnipegers have turned into. Headlines in the Winnipeg Free Press say Winnipeg expecting an early mosquito invasion. Mosquito invasion? Like, it’s Dunkirk or the Alamo or Vimy Ridge all over again?
When I was a kid, Gimli, Manitoba was mostly swamp. The lot beside us filled with water every spring. Two feet of water with holes so deep a kid could drown in them. One lot over, the people who lived in a shack marked the high water levels every year on their kitchen wall. When the water got passed their knees, they moved out until the flooding was over.
Water came from West. Out West, that is West of Gimli, there were gravel ridges and between the gravel ridges there were swamps, not little swamps, big swamps, swamps filled with cat tails, reeds and mosquitoes. There was little drainage and still water is a breeding ground for mosquitoes.
Every spring Gimli flooded. My mother used to let me float myself around the basement in a wash tub. The sump pump went night and day. We poled ourselves along the ditches and through cottage yards, using wooden sidewalks for gondolas.
Mosquitoes bred in those yards by the millions. If you touched a caregana hedge or a fir tree, mosquitoes rose in black clouds. At night, funnels of mosquitoes formed in the sky like tornados.
We used to cut off poplar branches and make smudges in the back yard. We’d start a fire with dry wood, then throw on the green branches. We’d stand in the smoke because it kept off the mosquitoes. We smelled of smoke until after Halloween.
We learned to hope for light breezes from the lake. When there was a breeze there were no mosquitoes. They settled in areas protected from the wind.
There are gnats in Iceland but no mosquitoes. The Icelandic settlers had no immunity to mosquito bites. We can only imagine what they suffered. There was no DEET. Even now, Icelandic tourists who come to Gimli for Islindingadagurinn react so strongly to mosquito bites that they sometimes end up at the Gimli hospital. It’s a standard joke that after suffering mosquito bites, some visiting Icelanders saw dragon flies and panicked and fled into their host’s house. I don’t blame them. They were covered in large, itchy, sore lumps. The idea of being bitten by something as big as a dragonfly would have me hiding in a locked room. Some Icelandic visitors have had to have antibiotics because the bites infected.
When the Ukrainians followed the Icelanders into the Gimli area, they settled West of the town. Right smack in the middle of the swamps. Andrew Hutch says, “We hired a merchant to transfer us to Gimli. This cost us $25. He drove a team of horses and took us through bush and swamps. Although we suffered from mosquitoes when we were in the loft, when we were driving to Gimli we thought that we would be eaten alive. (Spruce, Swamp and Stone, Michael Ewanchuk)
How big were the mosquitoes? In Komarno, a village west of Gimli, there is a statue to the mosquito. It is fifteen feet high. Kamarno means mosquito in Ukrainian. If we can have statues of trolls and museums about witches, why can’t there be statues (this works like a weather vane, moving with the wind) to mosquitoes? This statue tells you how much a part of daily life the mosquito was.
Komarno mosquitoes, Frazerwood mosquitoes, Gimli mosquitoes were no ordinary mosquitoes, no wimpy little grey Winnipeg things. They were big, when they filled up with blood and you smacked them, they exploded like a blood filled bomb.
They drove people and horses mad.
Many a summer’s night, I fell asleep under a sheet (we had no mosquito netting), listening to the blood thirsty little buggers circling, looking for any opening so they could fill up with my blood and have more mosquitoes.
I’ve seen today’s Winnipeg mosquitoes. Urban mosquitoes. Wimpy mosquitoes. Pests. Nuisances. Mosquitoes bred in water filled tin cans or old tires. Mosquitoes with no pedigree. Not only that but Winnipeg will have the lowest number of mosquitoes this summer in thirty years. Yet the headlines trumpet, Winnipeg expecting early mosquitoes. In Victoria, we get the same kind of headlines during the winter except it’s Victoria expecting snow and reporters stand around on street corners watching for the occasional snowflake.
Even when they do appear, these Winnipeg mosquitoes won’t be those large, black, ferocious mosquitoes that bred in Interlake swamps, mosquitoes that left the drained husks of man and beast in the fields. They won’t be the mosquitoes that inspired the fifteen foot mosquito of Komarno.