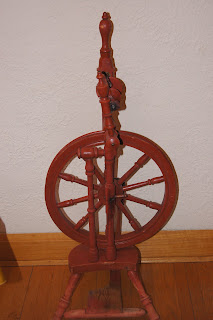 Ragnaheiður Straumfjord Magnusson´s spinning wheel, thought to have been made in Canada, now in Lauga Magnusson’s possession (Winnipeg, May 2012) Photograph W. D. Valgardson

When our ancestors came to Canada, butter was still being used as currency. In 1878, Athony Trollope, the English novelist who comes to Iceland as a guest of John Burns on the yacht, The Mastiff, is amazed that there is no bank in Reykjavik. Where there is no currency, there is no need for a bank. Although sour butter could be kept for years without spoiling, no bank wanted to keep its vault full of butter.
Our ancestors, if they were share croppers, paid their rent and debts in June and July with the “wool which was washed and ready for sale; and in September and October by wether-mutton smoked and cured; by grease and tallow, and by sheep-skins and lamb-skins with the coat on.” They reserve the butter and cheese (skyr) mostly for household use. “…Besides supplying food, the animals yield material for local industries—coarse cloth, clothes, frocks and jackets, mittens, stocking and socks.”
The production of wool and turning it into clothes was an essential part of life in Iceland. In Iceland, Burton says “The principal occupation of the women is spinning yarn during the summer, and knitting and weaving in winter. A rude loom fixed and upstanding…stands in every farm. A good hand can weave three yards a day.”
This wadmal was sold by the ell. You can’t embrace what you don’t know or understand and I, when I first came across a measurement called an ell, had  never heard of it and didn’t know what it meant. What was an ell? It was two Danish feet and two Danish feet were two and three eighths English feet. Our ancestors had to be able to do these comparative sums in their heads. In some places, these measures were drawn on church walls so people could check to see that they were measuring correctly.
How important was all this making of coarse cloth, all this knitting? Mr. Consul Crowe (he was an English consul) in his report of 1870-71 reports that there were 76,816 two threaded stockings produced, one threaded, 1,092, Socks, 28,431, mittens, one fingered, 55,601, full fingered, 69 and wadmal, measured in yards, 280. Your ancestors and mine knitted and wove some of those stockings, mittens, wadmal.
In writing a book, you dishonour a people and a subject by making errors. It is your obligation as an author to get facts right. This is as true for fiction as non-fiction. To include errors because of casual carelessness insults the subject. However, even with the best of intentions, the closest attention to the material, errors crop up. Often an author is tripped up by the obvious because it is the obvious that isn’t checked and double checked. The devil in writing is always in the details. I had mentioned in an early draft of one story in What The Bear Said that a farmer was shearing his sheep. However, that detail was wrong and had to be changed. Fortunately, I kept researching and stumbled across the fact that sheep were not sheared. The wool was pulled off when it came loose.
During my childhood many homes in New Iceland had spinning wheels. They were essential to survival in Iceland. In the beginning, they were essential to survival in New Iceland. These spinning wheels, along with carders and combs were a common sight. These spinning wheels were part of the In Between World. However, what was called European cloth was available in New Iceland. There were North American fashions and clothes that more properly suited the climate with its hot summers and cold winters.
My great grandmother, Freddrika Gottskalksdottir had a spinning wheel in her living room. Our great grandmothers’ spinning wheels have pride of place in many of our homes but, today, they are not essential parts of our lives. They are treasures from the past. They are reminders of our families, bits of nostalgia.
In spite of the general poverty in Iceland with its one crop (grass) economy, caused by the cold summers that kept the grass from growing, Burton says “The peasant sells his cattle and sheep to buy for himself vile tobacco; “bogus” cognac; brenivin or kornschnaps,and perhaps even “port” and “sherry;” and for his wife chignon and crinolines, silks and calicoes, instead of the homely but lasting frieze cloth. His grandfather infused Iceland moss; he must drink coffee, while raisins…are replaced by candied or loaf sugar…The Althing has attempted to curb the crying evil of ever increasing drunkneness, the worst disease of the island because the most general”.
If we are going to embrace our heritage, we need to embrace all of it and that includes the Danish trading posts that sold 600 gallons of cheap brandy every year. That includes some Danish trade ships that, instead of bringing desperately needed goods such as horseshoes, metal bars, rye flour, they brought only cheap brandy because it gave the greatest profit.