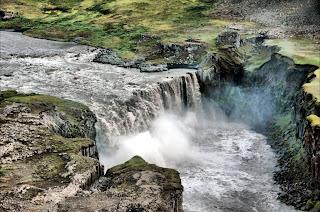 Hafragilsfoss, waterfalls were an important part of our ancestor’s lives. Why wouldn’t those others who shared the Icelandic landscape live here?
Episode 10 Embrace Your Heritage
However, a heritage is not just living conditions, working conditions. It is also a state of mind. In my blog, wdvalgardsonkaffihus, I’ve written about my great grandfather, Ketill Valgardson and the fact that he was a Christian. Even a small amount of research makes clear  how important religion was to people living in a situation where there was often little except prayer and hope against oppressive laws, a climate that often caused widespread hunger, and a landscape that was so filled with ice and fire that many believed it housed the entrance to hell.
Was it any wonder that people were not only religious but superstitious?
There are thousands of Icelandic folk tales. They exist because people needed to find a way of explaining the inexplicable. Remember, for example, that when our ancestors lived in Iceland in the 1800s, Geyser was still inexplicable. One account after the other of the Great Geyser tries to explain it. Foreign explorers come to study it. It was a wonder of the world.
With isolation, disease and death at every hand, with storms raging on sea and land, with avalanches and volcanic eruptions occurring at random, who would not believe that malevolent creatures were to blame? Who, living in wretched rock and turf houses, without heat, often without enough food, would not dream of the good houses, the good food, the good lives of the invisible people, the huldafolk?
With avalanches of rock, sudden, unpredictable, unstoppable, destroying prosperous farms, beggaring a farmer and  his dependents in an instant, who would not believe that trolls caused them?
With death at every hand, appearing for no apparent reason, with no treatment for diphtheria, smallpox, measles, leprosy, with four doctors for a country where travel by horse was often not possible for a good part of a year, where medicine ordered from Denmark could take a year to arrive, where ice sometimes filled the bays, where grass didn’t grow, where animals became ill and no one knew why, why wouldn’t people believe in ghosts, many kinds of ghosts? Children died in great numbers, so did fishermen, people disappeared on the vast lava fields and heaths. There was always a great source of ghosts and why, when much of this was inexplicable, wouldn’t it give rise to a land thick with ghosts?
When people emigrate, it is not just their bodies that they take to a new country. They take with them their experience, their knowledge, their superstitions, their religion, their fears, their strengths, their weaknesses, their virtues and their vices.
How could it be otherwise?
Icelandic Canadian people have told me about the trolls that lived under local bridges, about the fylgjas that came before some people, about malevolent spirits that plagued some families in places like Gimli and Arborg and Lundar
in New Iceland.
These creatures came with the settlers for as people must have them so must they have people. These creatures are part of the stories in What The Bear Said. They were as real as the wolves and bears, the moose, the deer, all the strange unbelievable creatures that don’t exist in Iceland.
In this scientific age, we feel that science can and must explain everything, although in recent years there has started to be a rebellion against the dictatorship of science.
In New Iceland life was harsh. Many died. One of my great great grandparents children died of smallpox. Two sons of my great grandmother drowned. Perhaps, those who lived in the inbetween world needed trolls and huldafolk and otherworldly creatures plus their religion to help them deal with these events. After all, tragedy accompanied them when they boarded the ships for Amerika.
As for the people of this in between world, I embrace them. The world, the settlers knew, was not a rational place and that what was not rational needed an irrational explanation.