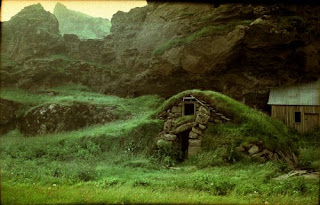 When we say we want to embrace our heritage, we aren’t just talking about how much we like eating vinarterta or soaking in the Blue Lagoon. We’re talking about all everything that has made up our heritage, everything that made our great grandparents and great great grandparents, etc. who they were. We’re talking about all of Icelandic society.
We’re also talking about making an effort to understand the daily lives of the people. A big part of those daily lives were taxes.
There were numerous taxes but the major tax that Icelandic farmers paid was the tax to support the poor, the paupers.
Who were the paupers and why did they exist?
There were lots of ways to become a pauper.
Fishing was very dangerous. Burton says four out of every ten male deaths was by drowning. One can probably expect that those deaths by drowning were fishermen. An open row boat might hold fifteen men. Virtually every description of Icelandic open boats I’ve read describes them as leaky or very leaky. North Sea weather is repeatedly described as violent with high winds and waves. Bringing a boat ashore where there were no docks or jetties meant launching and returning through the surf. The surf was always dangerous.
When a fish boat sank or overturned there were seldom survivors. The fishermen were weighed down with their sheepskin clothes, most, maybe none, could swim, swimming described in the sagas was long forgotten. The water was freezing cold. Say fifteen men drowned. These would not all be single, hired men. Many would be farmers, crofters, men with families, and since there was no such thing as birth control many of these families would be large.  If eight of the men had wives and an average of six children, there were now 54 paupers.
Then there were avalanches. There are many reports of good farmland being destroyed by cascades of rock. Sometimes these avalanches also buried houses and people but sometimes they just destroyed the  home field. That was enough. In a few minutes, the independent farmer could be reduced to poverty. Without a home field with its supply of grass, sheep and cows could not be fed and had to be slaughtered. A live sheep or cow was worth much more alive producing wool and milk than dead. With no home field, with destroyed grazing land, a farmer was reduced to penury. There were no other jobs. If twenty people lived on the farm, all had to seek employment elsewhere. Some might be hired as laborers, of course, but some not.
Rich farms with good land, with shore rights, with boats, with owners with political connections, could survive some bad seasons but small farmers could be reduced to poverty by bad weather. A short growing season, unseasonal snows, rain, hail, could mean not enough grass to feed animals. Combined that with a poor fishing catch and there was starvation. Farmers on marginal land couldn’t survive.
Of course, there also were volcanic eruptions. Volcanic eruptions were good ways of creating paupers. It’s pretty hard to grow grass on a lava stream. Lava streams in Iceland are long and broad. They destroy everything in their path. People might flee but with grazing fields, home fields, houses, cattle, reduced to ashes, entombed in solid rock, where do the survivors go for food and shelter?

It was not just the people on farms swept away by lava who suffered. The poisonous gases and the particulates spread from the eruptions did great damage. In places, the grass was covered with silica granules. The cattle, from eating the grass, got cuts in their mouths, sores developed and from these, blood poisoning. The cattle had to be killed.

Old age, if you survived to an old age, could turn you into one of the poor wretches described by travellers, living at the mercy of the hreppar and the farmer. You might have got by working as a farm hand and fisherman, never making enough money to buy land and animals, to have your own place but, eventually, disease and infirmity would make it necessary for you to go back to the hreppar where you were born and ask for welfare.

Thuridur (177-1863) started working on her father’s boat when she was eleven.l When she was seventeen, she was working on her brother’s boat as a full seaman. She became a foreman. She supported herself and her children but in old age she had to ask the hreppar for assistance.

Or, you could be an orphan. There were lots of orphans for epidemics were common, women dying in childbirth was common. In spite of all the restrictions on marriage, illegitimate births happened. In some syslas, they were one in every three births.
There were few ways of becoming rich but many ways of becoming a pauper. You might, for example, have become addicted to cheap Danish brandy. You might have had one or more children out of wedlock. You might have had an accident or become ill with a debilitating disease and Burton says there are so many diseases that all a writer can do is list them.
With so many ways to become a pauper, it is no wonder that there were many of them and since they had to be supported by those who had enough money to pay taxes, that is the land owning farmers, it is no wonder that the farmers didn’t want anyone marrying until he could prove that he could support himself, his wife and the inevitable children.
Tomasson, in Iceland, the First New Society, says that in 1870, 5.6% of the population were paupers.
Burton says that the farmer, besides paying regular taxes, also pays three tithes: to the priest, the Church and the poor. The tax to pay for the poor is the largest tax of all. It was called fátækra útsvar. This is on top of what is called the poor rate. It is as much as all the other taxes  put together. In some parishes, it is double the amount of all the other taxes.
In the autumn when the parish had a meeting, the Hreppstjóri set the amount of the tax. It would be interesting if we could listen in on one of those meetings. I expect the debate was somewhat heated.
Burton, in 1872, regards pauperism as evil. His solution, when our ancestors were getting ready to leave Iceland, is to get rid of the “sturdy vagrants who infest the land by providing free passages to America, or elsewhere.” It would be interesting to know who these “sturdy vagrants” are.
My great great grandfather, Valgardur Jonsson, came to Canada in 1878. He was definitely not sturdy. I expect that he was ill when he left Iceland. He died three years after he arrived. Ethel B. Harley (Mrs. Alec Tweedie) in A Girl’s Ride in Iceland, pub. 1889, looks from her ship’s cabin to see 40 Icelandic emigrants. These are our ancestors. “men, women, and children, many of the former quite old, apparently not more than one in five capable of a good day’s work”.  These were not the “sturdy vagrants” Burton wrote about from 1872. From her description some of these may very well have been paupers having their way paid to North America. England had got rid of its undesirables by shipping them to Australia. Iceland got rid of some of its tax burden by shipping some people not capable of a good day’s work to Amerika.
I wonder, though, if my great grandfather, Ketill, was one of those sturdy vagrants? He was eighteen, healthy, when he came with his father to New Iceland. His mother, his twin, and a sister had all died. There was just him and his ill father. Were he and his father such a burden on the tax paying farmers that it was cheaper to pay their fare to New Iceland than to keep them? Ketill came to Canada prepared to work, at fishing, on the railway, building a dairy, then a farm supply business, then a farm. He may have been irascible and sometimes difficult to get along with but no one could ever accuse him of being lazy.
Guðmundur Stefánsson who emigrated in 1873 writes to Iceland saying that emigration is good “But it is no good for those to come who are neither adaptable nor ready for hard work.“ For him to say this there must have been some he thought not willing to do hard work. He did not say not able. He said not willing.
Who were then, these healthy, lazy louts who lived off the public dole? They, the farmers who paid a  heavy poor tax to support them and resented it (nothing new in that, we still have great effusions of resentment from taxpayers over people on welfare), the parish officials who officiated, the people who made the decision to solve the  pauper problem by shipping people to Amerika–all of them–are our heritage. They all sound terribly human if not always humane. I embrace them all for they struggled against forces beyond their control in an environment where day to say survival was an accomplishment and, if they hadn’t, I wouldn’t be here. And neither would you.