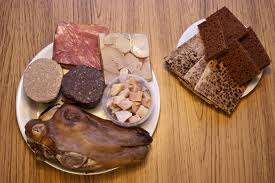 This year’s Thorrablot has come and gone. It was a great success. Thorrablots are all about food. They are midwinter feasts, originally, to celebrate the pagan god, Thor, and to  herald the turning of the year toward spring. Today, in North America, Thorrablots are an opportunity for members of the Icelandic North American community to get together to visit, to eat, and honour our ancestors who came to North America during the great emigration that started around 1873.
Food. Food. Food. Not something most of us think too much about except to complain about the rising prices. Even at the time of emigration, when other countries had industrialized, Iceland was a rural nation. Not rural in the sense of small villages and towns but, rural, in the sense of isolated, individual farms.
The only crop was hay but it was essential to survival. The hay fed sheep and dairy cows. They provided milk products and meat. No grains would ripen so no fields were ploughed or seeded. The only agricultural activity was the spreading of sheep manure on the precious home field where the best grass was grown. So few vegetables were grown that when foreign visitors saw turnips or cabbages, hardy vegetables that could withstand both the cold summer temperatures, the rain and the wind, they commented on it. They also commented on how small the vegetables were.
The standard meal was dark rye bread, the rye flour being made from rye grain imported by the Danish trading merchants. Grain was expensive and only those whose farms were prosperous could afford it. Many Icelanders didn’t taste bread from one year to the next. The rye bread was eaten with skyr and dried cod with butter. If there was no rye flour, then the meal would be skyr, dried cod, butter and,  hopefully, coffee.
The Icelandic farmers, every year, faced an incredible challenge. In the three months of summer, they had to produce and store enough food to last through the next nine months. If they didn’t, they starved, often they starved to death.  There were no grocery stores, no credit cards, no food banks.
That is why every part of an animal was used. That’s why people ate svið, singed and boiled sheep heads. That´s why they made sviðpasulta,  head cheese, lifrarpylsa, liver sausage, bloðmör, or slátur, blood sausage. Nothing was wasted.
When working men and even the owners of small farms were not cutting hay and storing it, they went fishing in open boats. Dangerous, cold work, fishing with a hook and line, they lived in stone huts on the wind and rain swept shore. The fish and the fish heads were dried. Again, nothing edible was wasted.
Contrary to popular belief, Iceland is not cold like  the prairies of Canada, nor is it cold like the Arctic. The temperatures are moderate with few really cold days and few really hot days.  However, there is a lot of wet, windy weather. This posed a major problem for a people who needed to store food for nine months of the year. Their solution was brilliant. They produced a lot of skyr (it is like a firm yogurt). That produced a lot of whey. Whey is acidic and can be used to preserve food.
That’s why hrútspungar, pressed sheep´s testicles  (I told you nothing was wasted) are served. The are pickled in whey. It’s not available in North America but if it were, hvalspik, or pickled whale blubber, would be served. Sometimes you might find lundabagger. It’s made from all the animal’s leftovers that are rolled together and boiled, pickled and spiced.
The closest dish to our normal North American diet is hangikjöt. It is smoked lamb or mutton.
There´s also rullupylsa, rolled, pickled and boiled sheep´s flank. It is served on brown bread and is a great favorite.
But the favorites are always the Icelandic sweets. There´s the ponnokokur (thin pancakes spread with brown sugar and rolled), vinarterta (a prune torte, usually seven layers), skyr (nowadays served with strawberries). If you are lucky, there’ll be rosettes, crisp, deep fried cookies with a dollop of whipped cream and a dab of strawberry jam. The rosettes were originally Swedish but, no mind, vinertarta, the most beloved of all Icelandic food, was originally a Viennese torte.
This celebration is important to the Icelandic North American Icelandic community because it does a number of things. The feast itself is a symbol of our identity. It perpetuates our myths of Iceland, of the emigration, of the resulting struggle to survive and prosper in a foreign land and make it ours. It helps to transfer our values and traditions to a younger generation. It helps us to maintain a cultural identity.
It is these functions that must be preserved. If they are not, if we do not understand what it is that we eat and why, if we do not use these occasions to perpetuate our myths of Iceland and the emigration, if we do not use these occasions to pass on our values and traditions, then we will, as a community, dissipate, and lose our identity.
Thorrablots are enjoyable but if all they become is an evening on which to dine and dance, they will  have no call upon the members of our community to make them a priority and they will, and we will, succumb to competing desires and demands.